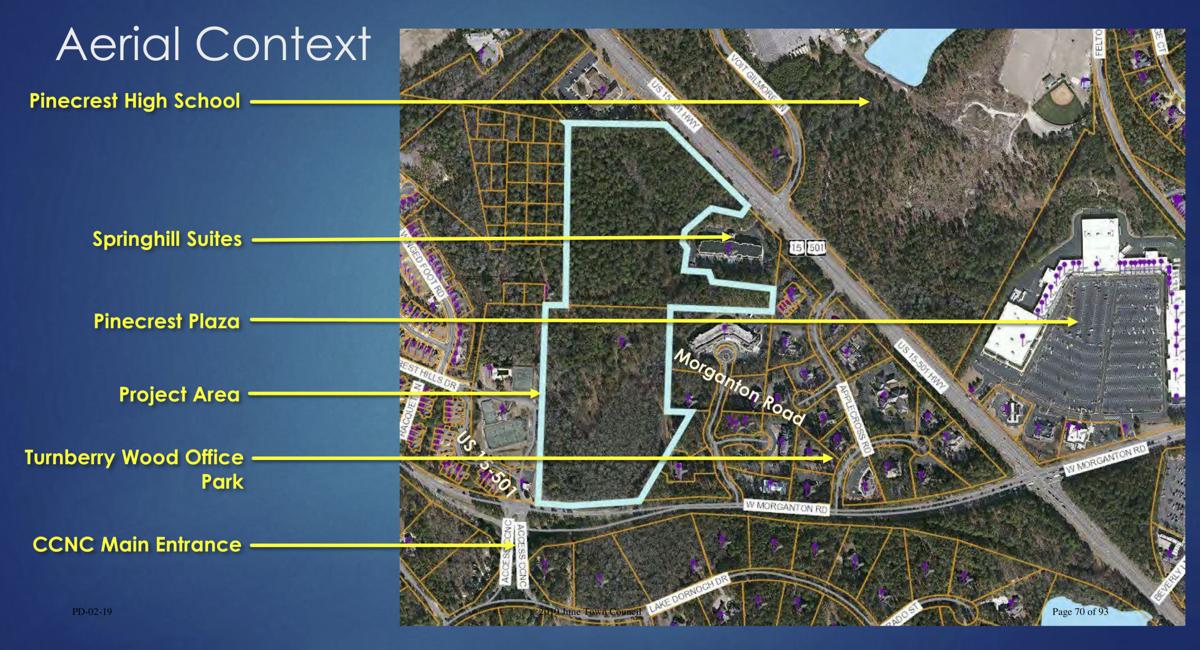 An aerial graphic showing the undeveloped property in relation to other landmarks. (Image courtesy Koontz-Jones Design) 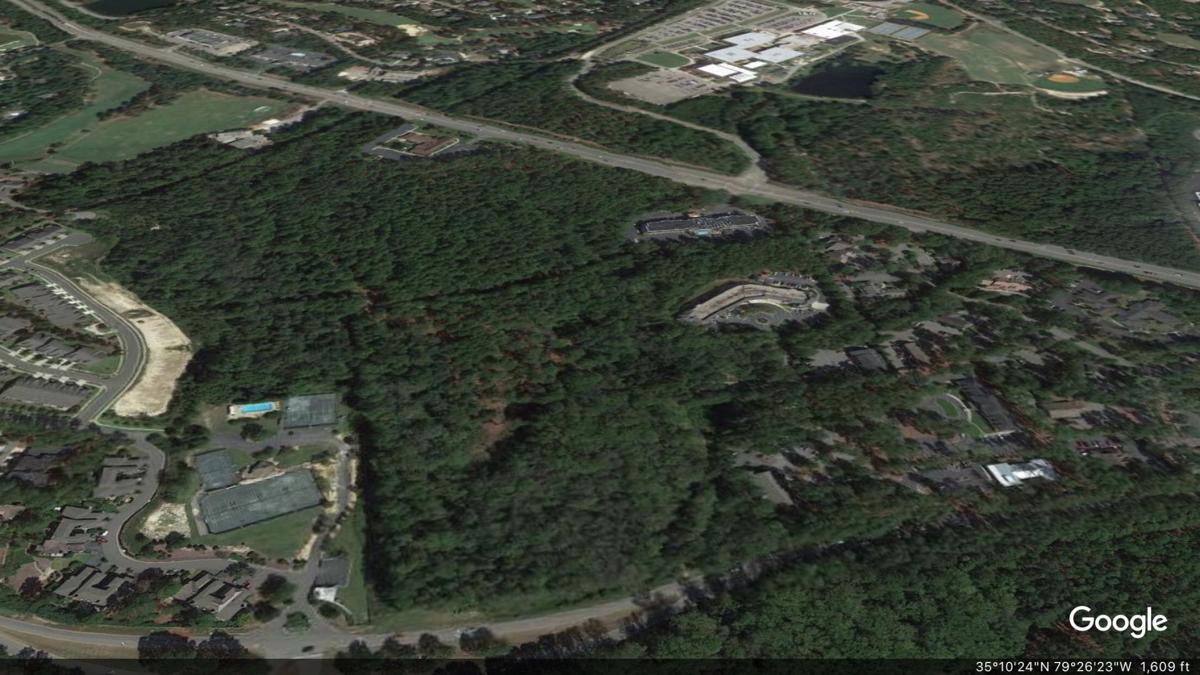 Aerial view of the Southern Pines property where a new apartment community is being developed. (Image via Google Earth)

Plans to build a gated apartment community in Southern Pines were approved Tuesday by the town council.

The development will be located on a 31-acre tract abutting U.S. 15-501 and Morganton Road. Conceptual designs submitted by Bob Koontz of Koontz-Jones Design call for a complex of 12 buildings containing a total of 288 apartments.

Koontz said the community will be “highly amenitized,” with tenants having access to a clubhouse, swimming pool, fitness center, car wash and other facilities.

According to Koontz, construction will not encroach on the property’s floodway or cause significant harm to the site’s wetlands. He told the council that a recent biological assessment of the land, which is currently covered with vegetation, found “no issues related to endangered species.”

Conducted by a local environmental consultancy, the biological assessment said the development will remove about six acres of “foraging habitat” for red-cockaded woodpeckers. Still, the assessment concluded that the project is “not likely to adversely affect” the birds.

Conceptual designs for the apartment community received unanimous recommendation last month from the town planning board. The plans also satisfied homeowners in Country Club of North Carolina, where many residents were opposed to a 2016 proposal to build a $20 million shopping center on the same property.

That proposal was abandoned after being met with resistance from CCNC residents who feared the shopping center would snarl traffic near the subdivision’s entrance on Morganton Road. John Biggar, chairman of the CCNC Property Owners' Committee, said Tuesday the group had “no objections” to the proposed apartment complex, which was designed with input from the state Department of Transportation.

The proposed shopping center, a plaza that Publix was rumored to anchor, would have included only one entrance for motorists. The planned apartment complex will be accessible from two gated entrances.

Because of the site’s proximity to Pinecrest High School, the council had instructed B.J. Grieve, principal planner for the town, to ask the school district for feedback on the proposal. A representative for Moore County Schools said the district has “no objection” to the project, according to Grieve.

The apartments will be built by Zimmer Development Company, a Wilmington business whose portfolio includes several multi-family housing developments in cities across the Southeast. This is the developer’s first project in Moore County.

“We’re a family business,” Lowell Zimmer, the company’s development manager, told the council. “We don’t take in any private equity. We’re personally funded, and what that means for you is our success is based off the success of this project.”

While architectural designs will be submitted later for review by the town, an illustration shared with the council on Tuesday showed a three-story apartment building with a brick foundation. The individual apartments, Koontz said, would be accessible from a breezeway inside the building.

A conceptual development plan for the apartment community was approved after a public hearing in which no residents spoke out against the proposal. The preliminary development plan, which provides a more detailed look at the project, was later approved by the council after a quasi-judicial hearing.

During a meeting last week, town manager Reagan Parsons said the number of individual apartments planned for the community is “pretty common” compared with previous applications submitted to the town for similar projects. Mayor David McNeill on Tuesday said the development marks the “third large apartment project” approved by the town in recent years.

“In my opinion, this one fits where it is going on (U.S.) 15-501,” McNeill said. “I think as evidenced by the fact that we don’t have a full house here tonight opposing this project, it fits (on the property).”

The development received unanimous approval from the town board, with multiple council members voicing support for the project.

“I think they’ve done a good job of presenting a plan that is agreeable and beneficial for our community,” Councilman Jim Simeon said.

The property includes land that has been approved for potential commercial development, but the bulk of the site will be dedicated to the apartment community. Zimmer Development Company hopes to begin construction in early 2020.