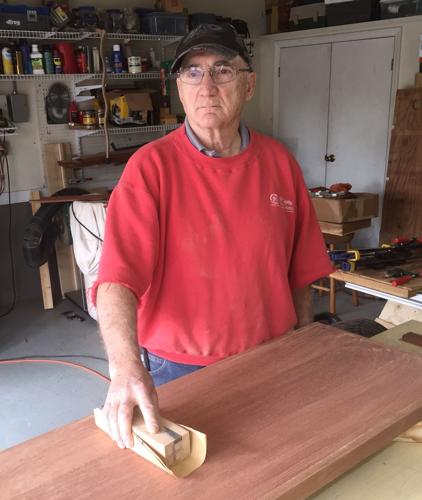 Bill Walters in his garage workshop 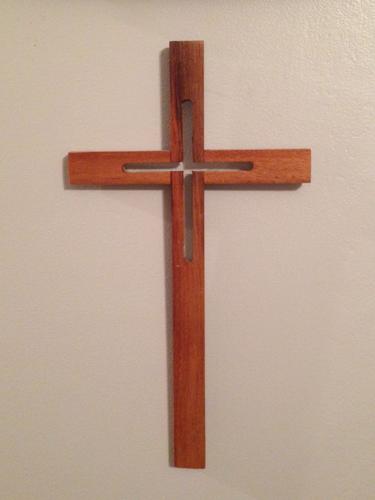 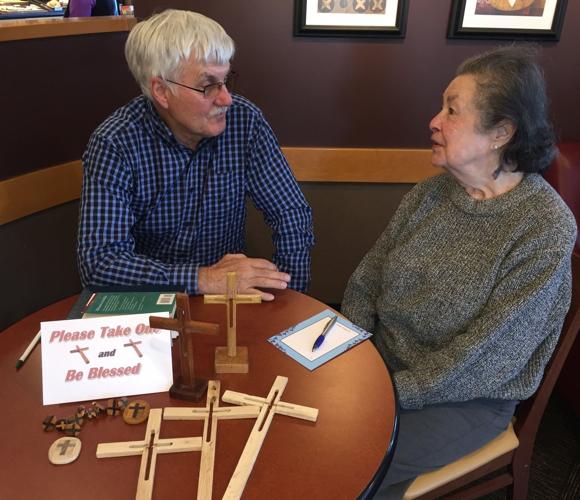 Doug Leidy talks to Sylvia Rizzuto about the cross ministry at Panera Bread, in Aberdeen. He offers crosses and fellowship there each Monday.

Bill Walters in his garage workshop

Doug Leidy talks to Sylvia Rizzuto about the cross ministry at Panera Bread, in Aberdeen. He offers crosses and fellowship there each Monday.

Bill Walters is a man on a mission. He wants to spread the Gospel, one cross at a time. You see, Walters makes crosses. Lots of them.

Walters moved to Pinehurst in 2005 with his wife, Andrea, shortly after he retired from his life-long teaching position in upstate New York. In 2011, they became founding members of Trinity Christian Fellowship, a new interdenominational church, which was soon operating out of rented facilities near the Pinehurst post office and conducting Sunday services at The O’Neal School.

“It was a busy time,” says Walters. “Everyone was pitching in to help establish the new church.”

A man of many talents and a heart for service, Walters volunteered to do just about anything that needed doing for the new church.

“I swept floors, replaced doors, hung curtains, built fences, and did lots and lots of painting,” he says.

One day, Dr. Al Hill, then Trinity’s senior pastor, shared with Walters that he needed a podium that could be used during Bible studies.

“He asked if I could help,” says Walters. “At the time, I had little woodworking experience and didn’t even own a saw.”

But it was not in Walters’ nature to say “No.” So he bought a table saw, a router, and a few other tools and created a podium of such fine quality that it now serves as the lectern in the sanctuary of the permanent home Trinity has occupied since 2015, just up the street from the Pinehurst Fire Department.

But Walters’ real passion is crosses.

“While working on the decorative front-piece for the original lectern, I got the idea for the ‘cross-within-a-cross’ design — a small cross framed by a larger cross,” he says. “This design is featured in nearly all of my wall-mount and free-standing crosses.”

By Walters’ estimate, he has produced well over 6,000 crosses of varying sizes. He distributes the crosses during his travels, and he is occasionally assisted by members of the Trinity fellowship who take the crosses on their own travels.

“Together we have been able to distribute crosses in nearly 40 states and have tracked the final destinations of crosses to countries as far away as India, Indonesia, Israel, Spain, Portugal, South Africa, and various countries in Eastern Europe,” Walters says.

“The lapel pins and pocket crosses are especially beautiful,” says Walters, “because each is made from multiple types of wood, including black walnut and several varieties of oak.”

Walters never charges for a cross and discourages donations for his work.

For nearly every cross he hands out, he has a story of how that cross touched someone’s life.

“One time, while shopping for hunting equipment in a sporting goods store in Kansas City,” Walters recalls, “I struck up a conversation with a man from Joplin, Mo., who had lost his house to a tornado a year or so earlier and had suffered a crushed hip during the disaster.”

According to Walters, the two men talked for some time, until Walters eventually asked the man if he would like a cross.

“He was having a real hard time walking,” Walters remembers, “so he sent his teenage son to the parking lot with me.”

Through conversation, Walters learned that the young man had lost his best friend in the tornado that destroyed his family home and was struggling with his sense of loss and betrayal.

“I like to believe that my fellowship and the crosses I handed that young man helped him find his way back to the faith he had lost,” Walters says. “There have even been families so touched by the gift of a cross to a terminally ill relative that the families have chosen to bury their family member with the cross, carefully tucked for eternity inside a breast pocket.”

Although Walters is the driving force behind his cross ministry, he is regularly supported by volunteers.

There is the man who runs the old saw mill in Carthage who provides all of the wood that he uses. And there are those from the church who stop by to help with sanding, shaping, and finishing the rough crosses he produces by the hundreds.

Jim and Barbara Jepsen, both founding members of Trinity, were strong supporters of the cross ministry from the beginning. Jim has since passed away, but Barbara fondly recalls, “While my husband was alive, he and I loved to work on the crosses together. Jim found great pleasure in working with his hands, and he felt that it was something he could do to support church ministry, even though his health was failing.”

Most recently, Walters has found support for his ministry from Doug Leidy, another Trinity member, who each Monday at 11:30 a.m. pulls a chair up to a table in the Panera Bread restaurant in Aberdeen and offers Walters’ crosses to any who ask.

“I love to share these handmade crosses and the good news from the Bible,” says Leidy. “I also welcome those who have questions about the Christian faith. If I don’t have the answers, I know people who do.”

In the Bible, the book of Esther tells the story of a young Jewish woman who was able to save her people by believing that she was placed in her particular circumstance “for such a time as this,” that she could make a difference.

Bill Walters came to Pinehurst ill-equipped for the ministry he now serves. But his faith and a willing heart led him to a new purpose where he could make a difference.

And so he is. One cross at a time.

Bob Brown is a member of Trinity Christian Fellowship.

Get unlimited digital access and support award-winning local journalism, for just 9.50 +tax a month. This includes access to the electronic replica edition of The Pilot.

Check your email for details.

Submitting this form below will send a message to your email with a link to change your password.

An email message containing instructions on how to reset your password has been sent to the e-mail address listed on your account.

Your purchase was successful, and you are now logged in.

A receipt was sent to your email.

This offer is currently unavailable.