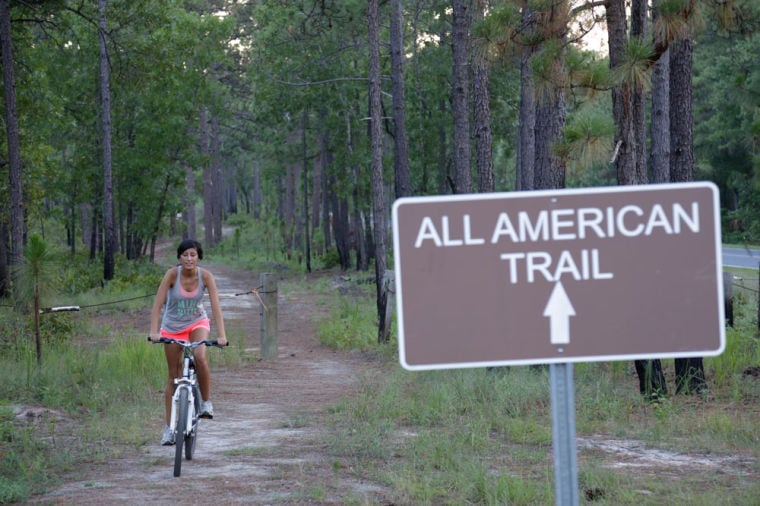 Priscilla Barron, of Pinehurst, bikes the All American Trail that can be accessed near Fort Bragg Road and Connecticut Avenue in Southern Pines. 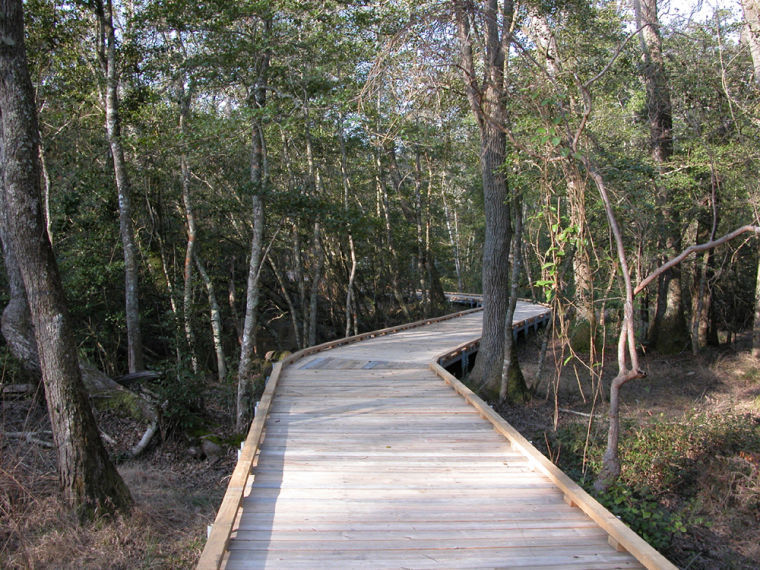 The boardwalk that is part of the All American Trail spans 1,000 feet of Rockfish River wetlands. 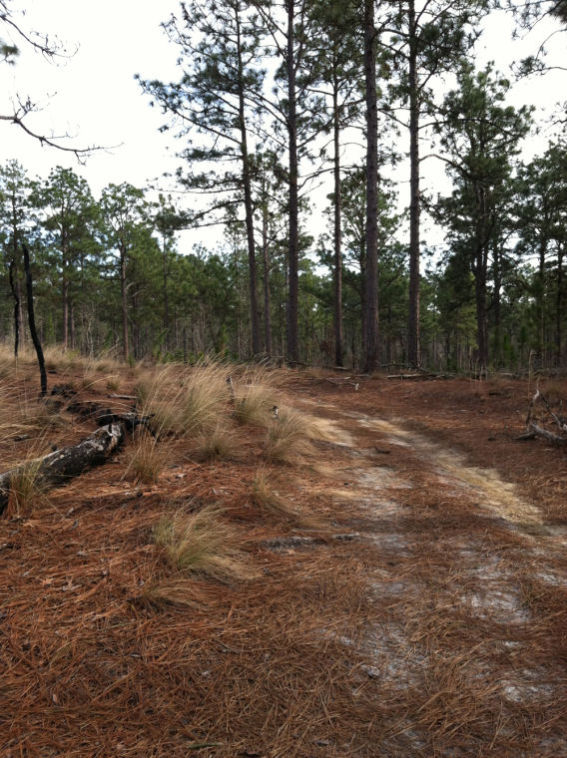 Some parts of the trail are isolated, and there are no amenities available.

Priscilla Barron, of Pinehurst, bikes the All American Trail that can be accessed near Fort Bragg Road and Connecticut Avenue in Southern Pines.

The boardwalk that is part of the All American Trail spans 1,000 feet of Rockfish River wetlands.

Some parts of the trail are isolated, and there are no amenities available.

The All American Trail is a rugged, simple and sometimes challenging local hiking and biking trail, currently 21 miles in length.

Completely open to the public, this trail follows the southern border of Fort Bragg and can be accessed at four spots. In Southern Pines, you will find a small parking lot at the corner of Fort Bragg Road and Connecticut Avenue.

Of the three other locations two are off Plank Road, one just east of where King Road meets Plank Road down a dirt drive and the second is further east on Vass Road. The third is at the corner of Hobson Road and Plank Road.

In Southern Pines, you will usually see a few cars parked and a covered map stand stands in front of a well-worn path.

As it wends its way from the Southern Pines lot, the path looks much like a conventional hiking trail in a long leaf pine forest. Soon it becomes a wide swathe of sand or rocky clay soil, more than 10 feet wide in places.

This terrain predominates, though there are a few stretches where it is packed and rooty pine forest floor or smooth deciduous dirt floor. It is not maintained in any meaningful way, and erosion has its way making an ever-changing obstacle course of the deeply rutted descents. The hills roll up and down, though the way back feels decidedly uphill.

You may find the benches along the trail and boardwalk welcome rest spots. They have been provided through Eagle Scout Projects.

The Southern Pines Ultra Running Club (spultrarun.com) has weekly trail runs almost every week that are open to the public. The out-and-back trail means you can run as little or much as you like.

The summer run held on July 19 is called “The March” is in honor of the horrific war time marches such as the Bataan Death March and The Long March that P.O.W.s were forced to make across Germany, Poland and Czechoslovakia during harsh winter conditions in 1945.

The winter run called “the Fat Ass 50K” is organized in connection with the Mangum Track Club and held in January. The name doesn’t refer to the effects of Christmas and winter snacking and lounging but rather to the fact that the runners must carry all their own food and water for the 31-mile run and will be appear heavily weighted down in the rear. It is open to only 75 runners. The web site says, “no fees, no awards, no T-shirts and no whining.”

Dan Paige, one of the organizers who won the race two years ago says, “They are both great runs, very challenging. During the one in the winter the ground is compact and the one in the summer is difficult — like a beach run. Both times of year they are secluded and pretty; you might see deer or turkey out there.”

Expect a challenge on the mountain bike as well, especially through the long stretches of deep sand. Tony Patnode, a long-time trail rider, even before it was a legitimate trail says, “Niners do better in the sand. They have larger contact area because of the larger wheel diameter and roll over the sand better.”

He refers to the 39-inch wheels of the “Niner” brand mountain bike.

It’s not unusual for someone to put a foot down or have an outright tip over in the deep sand. The sand makes for a much harder workout!

The forests are burned regularly and the vistas of beautifully open pine forest are lovely, especially in the Calloway Tract that abuts the trail. The U.S. Fish and Wildlife Commission, The Nature Conservancy and the NC Wildlife Resources Commission manage this 3,288 area preserve in Hoke County.

The All American Trail is a designated site on the North Carolina Birding trail (ncbirdingtrail.org) that is an informative resource for the birds you will find there.

The most knowledgeable person about the trail is James Dougherty, executive director of the Regional Land Use Advisory Commission, who is largely responsible for the trail coming about.

“The process started in 1988 when the Department of Defense contracted with me and Jason Epley to do a Regional Land Use Study,” he says.

By 2003, they had come up with some strategies about how to mitigate the needs of the military base and the surrounding communities.

“Areas that had high natural value (as habitat for the red-cockaded woodpecker) or were working farmland and forest were designated as areas to protect,” says Dougherty. “We found a means to buy development rights or land along the border of the base keeping it undeveloped, and recommended creating a recreational and nature area for hiking, biking and general outdoor use that would also protect the longleaf pine eco system.”

Some of the partners who helped make the trail come to fruition were the Sandhills Area Land trust, The Nature Conservancy, BRAC, now called the Fort Bragg Regional Partners and Sustainable Sandhills.

Fort Bragg donated the right of way and a $50,000 grant from the N.C. Department of Natural Resources supported the construction of the unique boardwalk.

The cedar walkway is cantilevered in order to cause little to no impact or damage to the 1,000 feet of Rockfish River wetlands that it spans. The supporting posts rest on scrap rubber pads supporting an aluminum frame instead of on pilings drilled deep into the waterbed floor. The path meanders through the water around trees to create as little impact and remove as few trees as possible.

An additional $40,000 came from the All-American Trail Fund for signage. In total the cost was no more than $170,000. Considering that current trail costs for another Fayetteville (paved) trail are running approximately $1 million per mile, this is an extremely low-cost trail with significant benefit for the community.

The only setback the trail has encountered is the very unfortunate accidental shooting of a Capt. Jeremiah Sipes, by a hunter in 2011.

Thinking the hunting season was over he was on the trail on Jan. 1, the day before the season ended. He was mistaken for a deer and fatally shot and killed. Additional signage and a 300-yard buffer between hunting area and trail were promptly instituted after the event.

The trail is a wonderful and challenging place but safety is to be taken very seriously.

Dougherty emphasizes how important it is to be safe and prepared.

“You may not have cell coverage, though I have not had that problem,” he says. “Bring water and consider bringing first aid as well. There are no amenities of any kind, including toilets.”

He cites a personal experience with a friend while hiking on the trail that was a near heat stroke experience.

“We put him in the shade and poured our water over him,” Dougherty says. “We were worried, but after a while his temperature came down but for awhile his skin was actually gray.”

The temperatures in the summer are often in the high 90s or more.

It is also important to remain on the trail and not venture down the other firebreak trails.

Fort Bragg set the standard for environmental conservation early in the 2000s with environmental programs to protect the red cockaded woodpecker.

This trail builds on that success. At the kick-off event and environmental conference they had a chance to showcase their work and believe it has become a model for other military bases.

Dougherty says, “The grand vision shared by some planners is for the trail to meet with the Cape Fear River trail that will eventually run to Wilmington. It could meet with the East Coast Greenway trail that run from Florida to Maine.”

How does he maintain such sustained a vision over the years?

“It has been so great to work with such a benevolent organization as the army that just makes it happen. Twenty-one miles of trail was the vision and it happened,” Dougherty says.