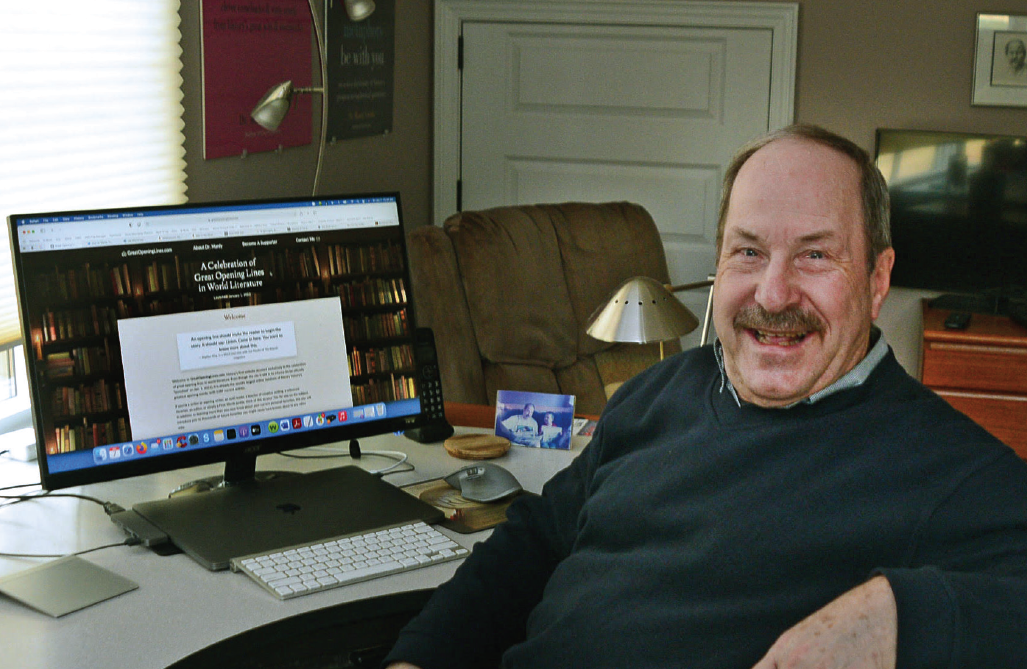 Grothe’s collection of lines is searchable by author, from Ray Bradbury to Franz Kafka and Hans Christian Andersen.

Dr. Mardy Grothe’s enthusiasm for language approaches Willy Wonka’s for chocolate,  Winnie-the-Pooh’s for honey, Earnest Hemingway’s for Scotch. However the degree which precedes his name – from ivy powerhouse Columbia University – is in clinical psychology, not etymology or semantics.

Yet after nine books extrapolating his favorite subject, Grothe is at it again. This time, a lengthy online compilation of opening lines which, Grothe preaches, can make or break what follows.

Grothe’s avocation belies growing up in North Dakota, a state still living down the woodchipper scene in “Fargo.” As an undergrad at University of North Dakota “I majored in frat parties. I hadn’t found myself until a teacher suggested he read Thoreau.”

After a successful career in counseling and “business therapy” seminars, Grothe and his wife Katherine left Boston for Raleigh, then Pinehurst, which he discovered when invited to The Country Bookshop for a book signing.

Because now – freed from the constraints of his profession – Grothe could indulge his passion for words, by writing about them. Not the vocabulary Professor Henry Higgins imposed on Eliza Doolittle. Rather the contorted alphabet amalgams that delight readers like a fizzy ice-cold soda on a July afternoon. Titles include “Oxymoronica,” “Neverisms,” “Ifferisms,” “I Never Met a Metaphor I Didn’t Like” and, most recently, “Deconstructing Trump: The Trump Phenomenon Through the Lens of  Quotation History,” in which he applies the words of ancient and extant pundits to the current aberration. George Washington’s farewell address, for instance:

“Guard against the imposture of pretended patriotism.”

All the while, from a home office overlooking Mid South Club, Grothe composes a brain-teasing newsletter, “Dr. Mardy’s Quotes of the Week,” in which he explores writers, philosophers et al with insight and humor for 10,000 subscribers, world-wide.

Surely the newsletter provides enough cerebral calisthenics for an almost-eighty-year-old. Not this one.

“When I started collecting quotes I thought about opening lines,” their ability to draw the reader in, titillate by preview. Their quotability often outlasts what follows, as in the familiar…

“It was the best of times; it was the worst of times.” (“Tale of Two Cities,” Dickens)

“Now is the winter of our discontent.” (“Riehard III,” Shakespeare)

Who can forget Melville’s “Call me Ishmael”? Certainly not one great white whale.

As a voracious reader, Grothe had already identified and saved 5,000 examples. “I’ve thought about this project for 30 years.” Now, he had the time. But how to accomplish the project was less clear.

With the pandemic looming, his usual publishers passed on the book proposal.

“I was devastated,” Grothe says. “I thought and thought, then said screw it. I’ll build my own website.” That way, he could separate the best 1,300 opening lines, with commentary, into categories: novels, nonfiction, newspaper columns and articles. He stipulated that the website should be ad-free and contents Google-searchable but the best web designer was pricey. Enough sponsors came forward to make it happen. Completing the project took six months.

One devotee responded “Damn you, Mardy. I spent 3 hours (on the site). It’s totally addictive.”

For the less well-read, browsing the site provides context and attribution to familiar phrases; Grothe predicts it will prove invaluable to writers and public speakers searching for a punch line, or bestowing authenticity upon an idea --- also, fulfill the opening lines’ primary purpose: entice the browser to locate the book, perhaps read it.  (“Good) opening lines establish the voice of the writer, a sense of who the character is,” Grothe believes.  “I want to tell people stories about these lines,” continues the author, who claims to be blown away by Kafka.

Grothe calls the project his legacy, a primary resource for writers. “This is what keeps me alive,” says the cancer survivor. “My curiosity is insatiable. I’m working harder today than ever – no burn out. That’s for people who take their lives too seriously. I’m having fun.”

After nine books and his weekly email publication, Grothe hasn’t run out of steam. He fairly vibrates with energy.

“I still have four or five books in my mind, all centered on language.”

Or, as in feminist author Rita Mae Brown’s wry opening line: “Writers will happen in the best of families. No one is quite sure why.”

Dr. Mardy's weekly column and books are engaging reading and are products of an original mind doing strenuous work.