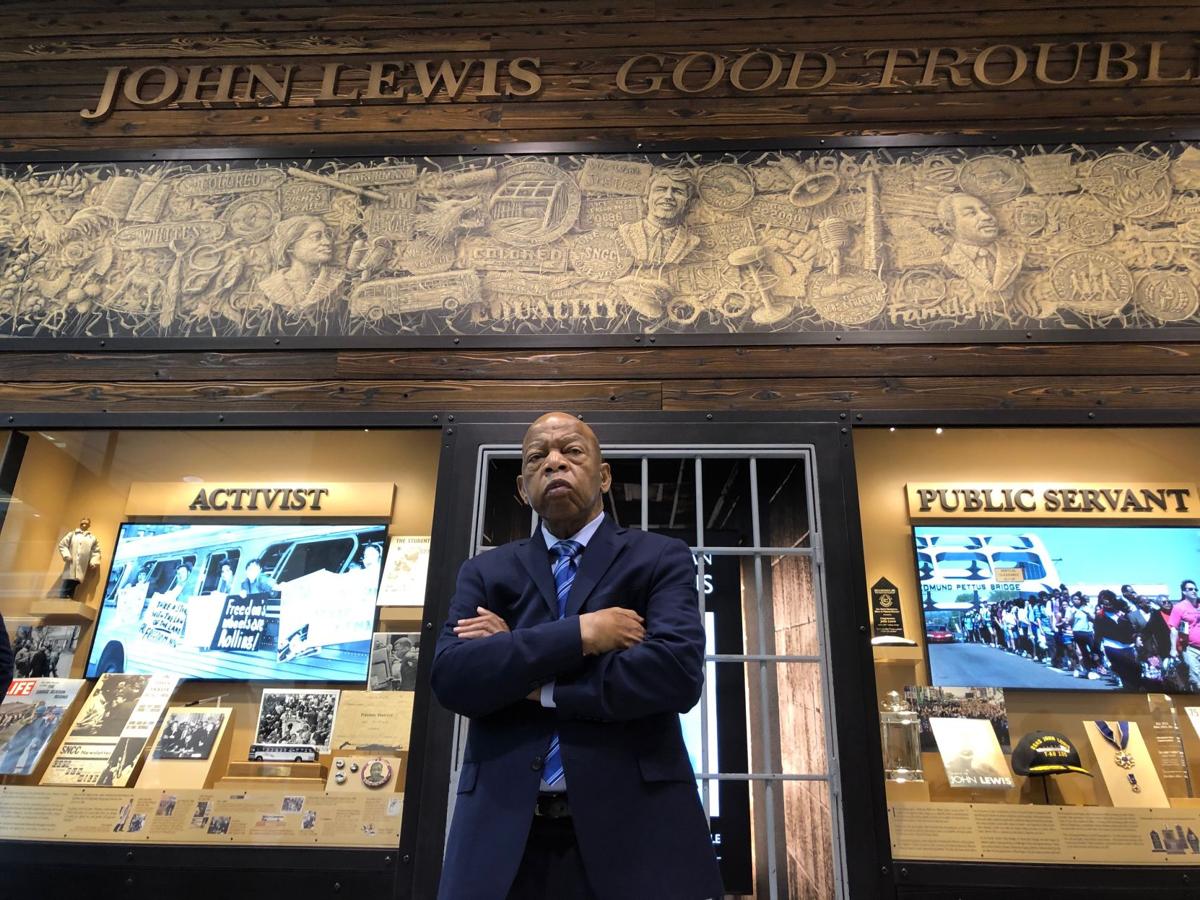 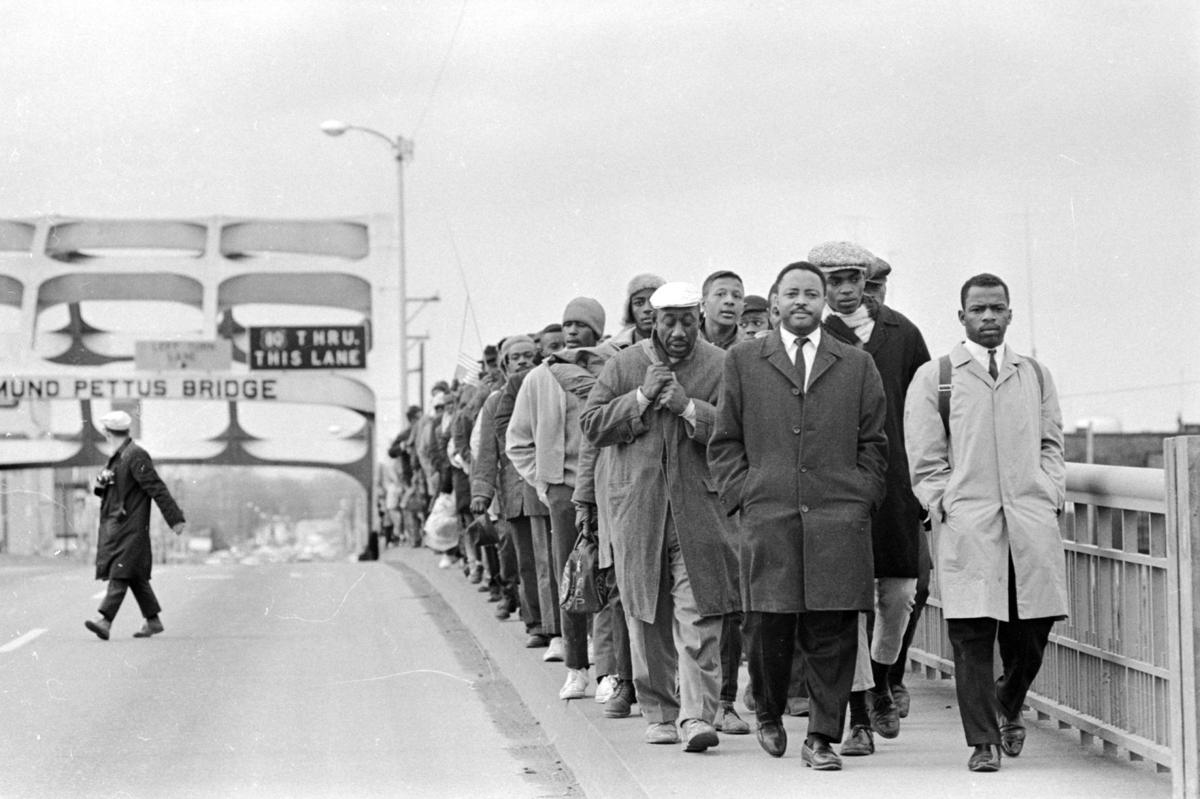 John Lewis (front, right) leads the march across the Edmund Pettus Bridge, in Selma, Ala.

John Lewis (front, right) leads the march across the Edmund Pettus Bridge, in Selma, Ala.

“John Lewis: Good Trouble” is a new documentary showing at the Sunrise Virtual Theater that chronicles the life and career of the legendary civil rights activist and Democratic congressman from Georgia.

John Robert Lewis’ 60-plus years of social activism and legislative action on civil rights, voting rights, gun control, health-care reform and immigration are the focus of the new documentary. Using present-day interviews with Lewis, now 80, the film explores his childhood experiences, his inspiring family and his fateful meeting with Dr. Martin Luther King Jr. in 1957.

One of the most extraordinary elements of the film is the wealth of rare and never-before-seen archival material unearthed that even Lewis himself hadn’t seen before. Lewis’ candidly emotional reaction to seeing rare archival footage for the very first time provides the documentary with one of its most powerful moments.

“I was observing John Lewis watching footage of himself at the National Voting Rights Museum and Institute in Selma, and I heard him remark that it felt like he was watching someone else’s life unfold,” said the film’s director Dawn Porter says.

The film features a variety of voices that showcases him in different ways. To young legislators, he demonstrates that you can live your principles and get things done, while still being true to yourself. His seasoned colleagues see him as a consistent and loyal friend. Americans from all walks of life greet the congressman as though he were a dear friend, thanking him for his leadership and inspiration.

Often called “one of the most courageous persons the civil rights movement ever produced,” John Lewis has dedicated his life to protecting human rights, securing civil liberties, and building what he calls “the beloved community” in America. His dedication to the highest ethical standards and moral principles has won him the admiration of many of his colleagues on both sides of the aisle in the U. S. Congress.

Lewis learned that the most powerful, nonviolent tool for change in the movement was the right to vote. So every day he works hard to defend and protect that right for everyone. He sees the right to vote as the cornerstone and proof of life for a strong democracy.

Universally admired as one of the most courageous and principled leaders of the civil rights era, Lewis was one of the original 1960 Freedom Riders, who mobilized to protest against interstate transportation segregation, and an organizer of 1964’s “Freedom Summer” to register African American voters across the South.

As the young chairman of the Student Nonviolent Coordinating Committee (SNCC) from 1963 to 1966, Lewis was one of the “Big Six” civil rights leaders of the era. He was the youngest speaker at the 1963 March on Washington for Jobs and Freedom. Lewis has often been singled out for his leadership and bravery on the Edmund Pettus Bridge in Selma, Ala., on March 7, 1965. There, along with 600 other nonviolent marchers, Lewis was met by Alabama state troopers who ordered the protestors to disperse.

As the marchers paused to pray, troopers fired tear gas at the group and mounted police beat the peaceful activists with nightsticks. A blow to the head fractured Lewis’ skull, but he managed to escape from the violent melee. In his appearance on national television that afternoon, bloodied and bruised, Lewis called for President Lyndon Johnson to intervene on behalf of voting rights. Today, he still bears scars from that brutal encounter.

“Although people see him as this fierce presence in Congress, the truth is that he’s very soft-spoken, quiet, and thoughtful in private,” film director Porter says.

There is a contrast between his public persona and his home life that is illustrated in the film. Porter also shows a less serious side of the civil rights movement icon.

“He loves art, and he loves to joke around, and he really loves to dance. He’s just a fun person,” Porter says.

Although “John Lewis: Good Trouble” celebrates the far-reaching accomplishments of one of the most beloved figures in American politics, it doesn’t shy away from documenting some of the controversies that are also part of his past. Covering those ups and downs in the congressman’s life was important to the filmmakers. “No one is perfect, and politics is messy,” Porter says. “I just felt that it was necessary to document those things as accurately as possible.”

To watch this documentary, go to www.SunriseTheater.com. Ticket prices cover an entire viewing group and are good for several days allowing the film to be watched multiple times. Virtual theaters enable viewers to watch new-release films at home until theaters reopen. Every ticket purchased supports the Sunrise Theater. Instructions for viewing are available on the theater’s website or by emailing Information@SunriseTheater.com