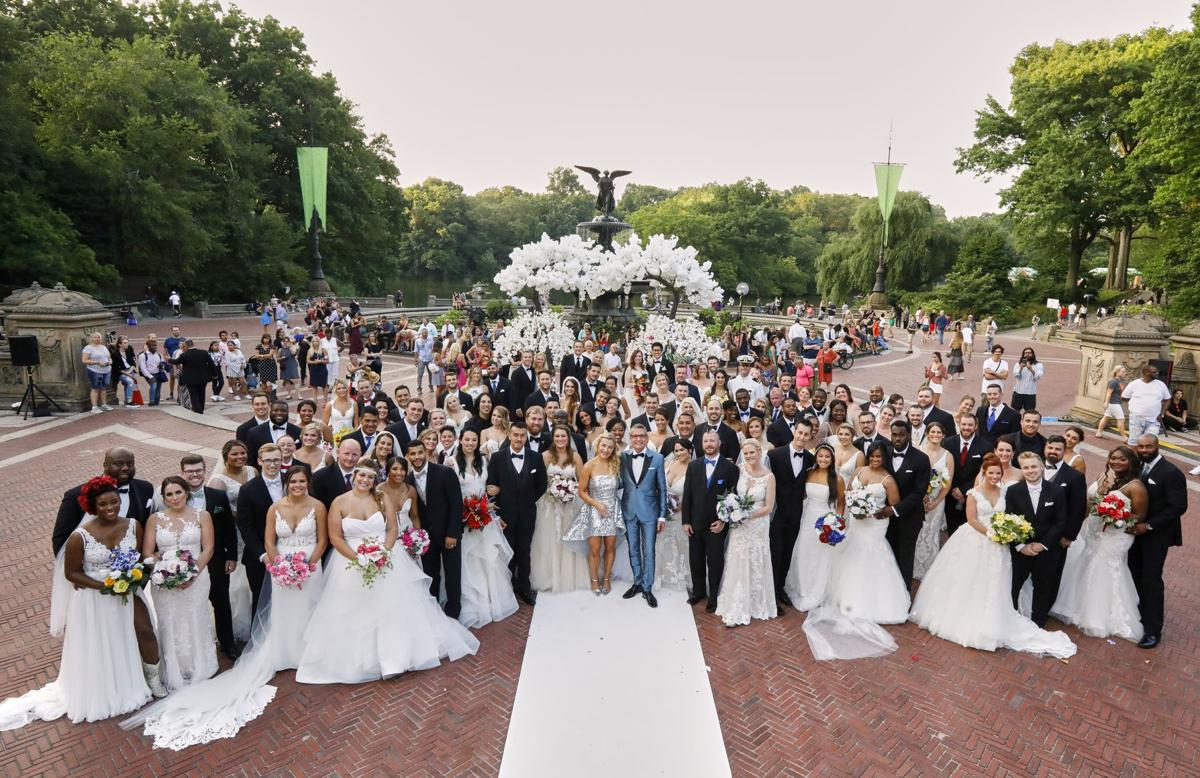 The brides and grooms gather for a group photo. 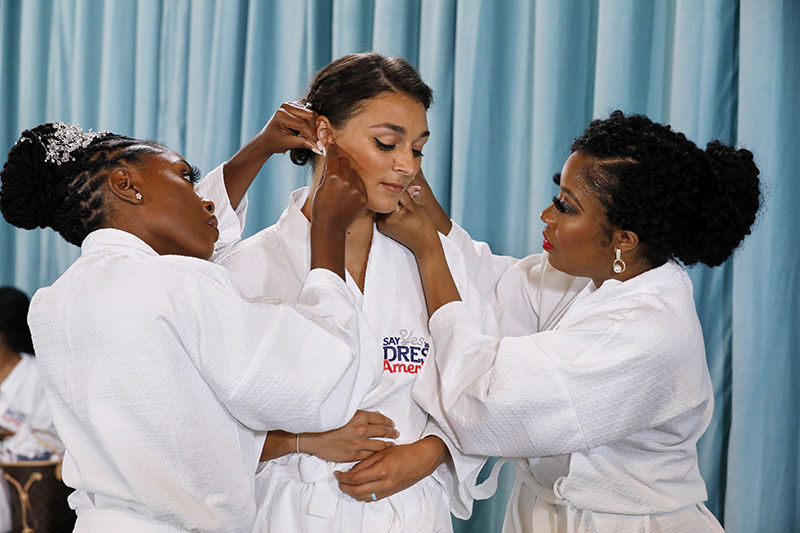 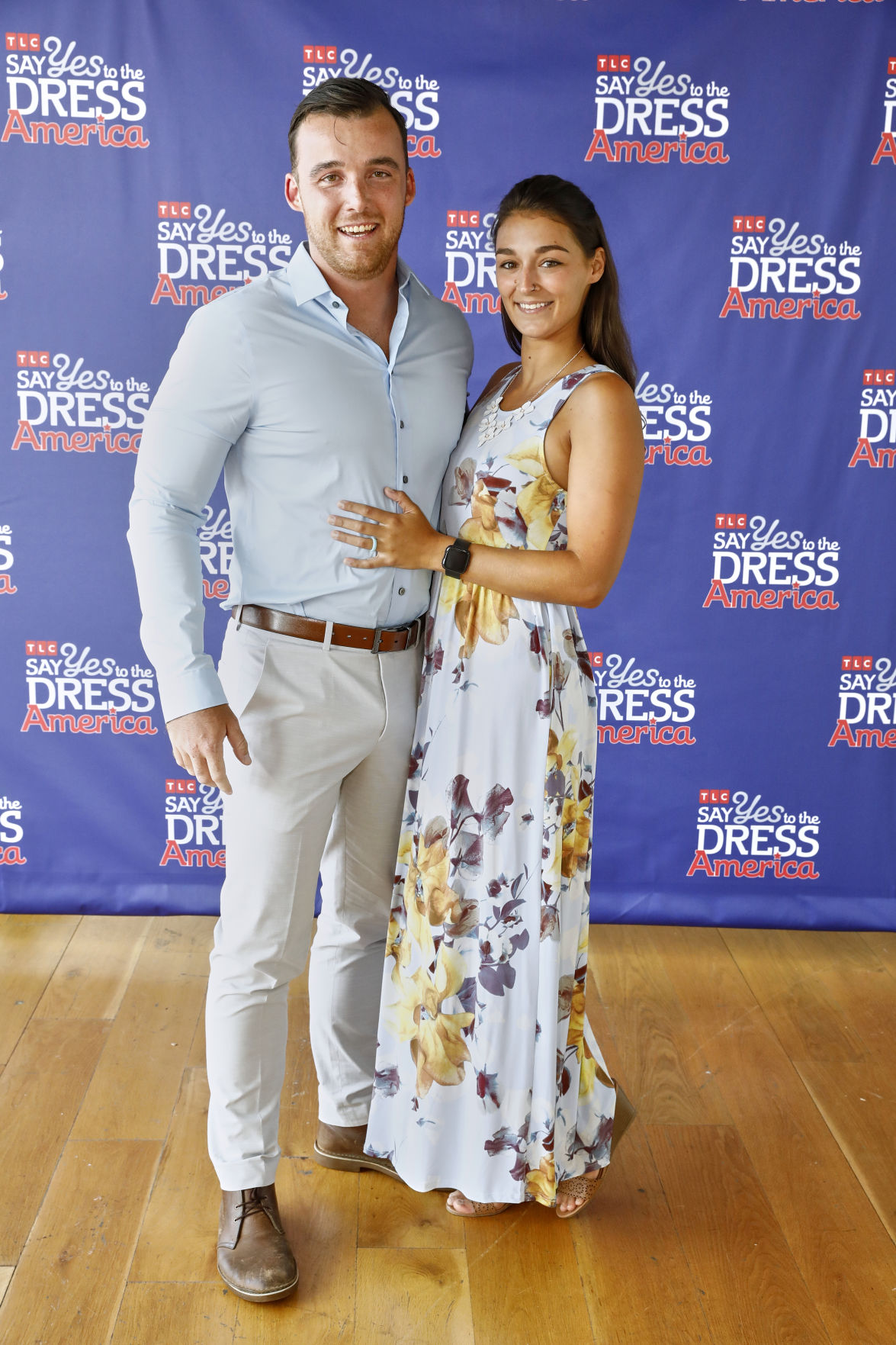 Joseph and Taylor Salama at the "Say Yes to the Dress America" reception.

The brides and grooms gather for a group photo.

Joseph and Taylor Salama at the "Say Yes to the Dress America" reception.

Taylor Salama grew up watching Say Yes to the Dress — and picturing herself as a “Kleinfeld bride.” Years later, she would fly to the iconic New York City store and find her perfect gown as a team from the TLC network cheered her on.

The series airs at 7 p.m. each Saturday.

“At the time, TLC was looking for event-driven programming and our production partners at Halfyard pitched us an idea for a big wedding with brides representing different states,” says Courtney Hardin, a TLC publicist. “We loved how it gave super fans an opportunity to be a part of something special culminating in a big event.”

Salama began browsing the Kleinfeld website soon after becoming engaged. On it, she saw an ad for casting and “applied to see what would happen.”

Producers soon followed up and asked the couple to make a video.

“It was very us — very natural but very awkward,” she says with a laugh. Still, she figured their love for the state gave them a good chance.

“Joseph and I ooze North Carolina pride,” she says. “We are both from different states, but this is our safe haven.”

The couple met in Salama’s home state of Maryland on a rock fishing boat. The military brought them to Moore County, which they’ve called home for a little over two years.

“This is where we’ve created our best memories, so we went around and highlighted different parts of North Carolina, from the beach to the mountains, and why it means so much to us,” she says.

Salama sent off the video and proceeded to check her email “17 times a day” until she received the one she was waiting for — the one that let her know she and Joseph were selected.

‘It Was a Whirlwind’

After spending a few months waiting for the trip (and spreading the word to incredulous friends and family) the two boarded a flight to New York. It was canceled after 10 hours of delays. They arrived a day late for a meet-and-greet with the other 51 couples. Then, the real fun began: Salama’s dream shopping trip at Kleinfeld Bridal.

“I had always aspired to shop there, and so it was 50/50 — half for the dress and half for the experience — that made stepping into that store a milestone for my life. When I finally did, I felt so overwhelmed.

Salama picked out her dress on a Tuesday. The morning of Wednesday, July 10, saw each bride getting ready with the help of 128 crew and staff members and a 20-person hair and make-up team. Salama calls it “the most chaotic few hours of her life.”

“I’m not sure how the TLC team managed all of us and pulled it off, because you can only fit so many bridezillas in the same room,” she says, laughing. ”But the feeling of camaraderie from working with the other brides was amazing.”

All 52 couples were wed one-by-one in a ceremony at Bethesda Fountain in Central Park. And through the chaos of all the cameras, the production team and random bystanders, there’s one moment Salama remembers.

“We were surrounded by hundreds of people, but I could only see my husband. It was a memorable event in history, but it was still unique to us. It was still just him and me, looking at each other.”

Getting to play a small role in what might be the biggest collective wedding ever will always play a major part in the couple’s love story.

“It felt incredible to represent our state,” Salama says. “I had never won anything, so to win the seat to my state was incredible. It required us to get out of our comfort zone and was totally against what we would normally do, but it was a lot of fun to celebrate Joseph and me in the public eye.”

This story appeared in The Sway in January.