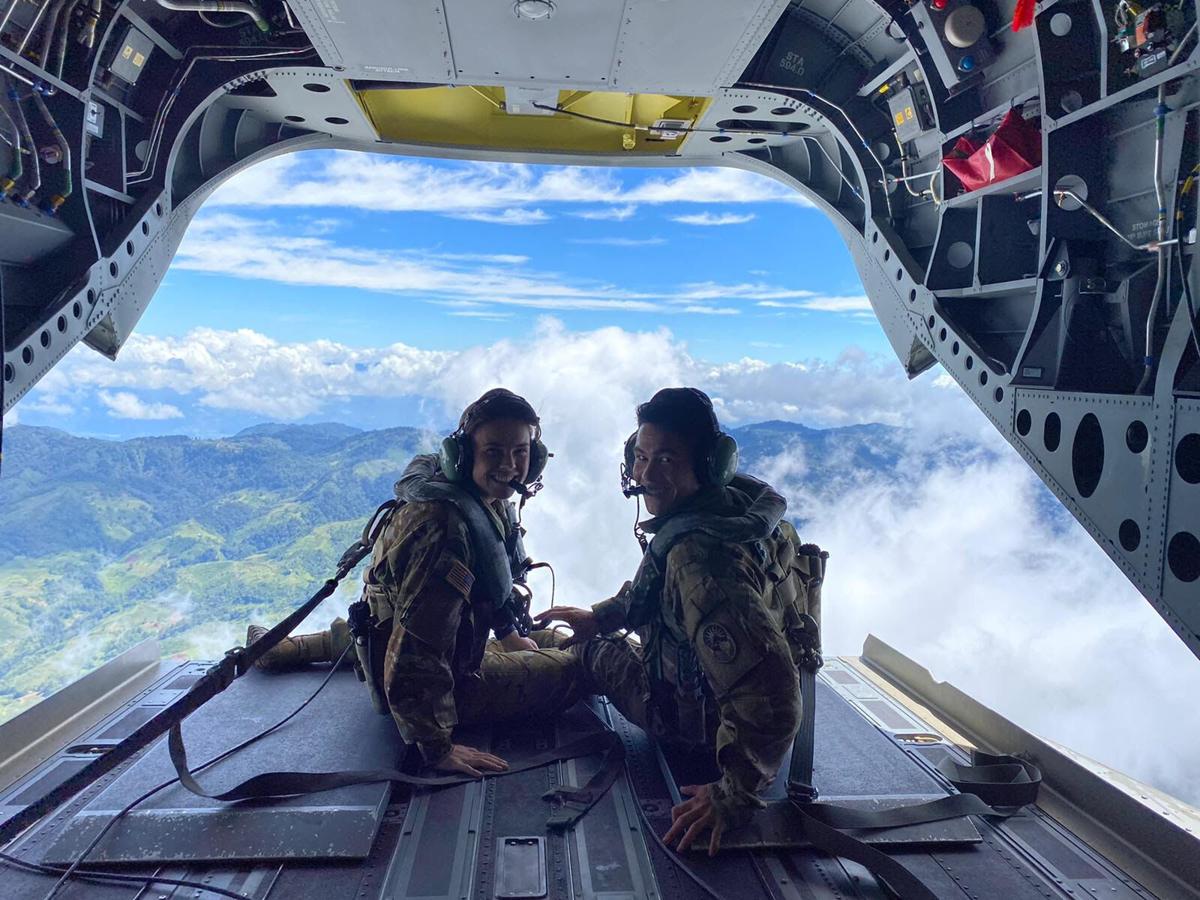 David Toguchi, pictured on the back of a Chinook, along with Abby, also a helicopter pilot. The two recently married. 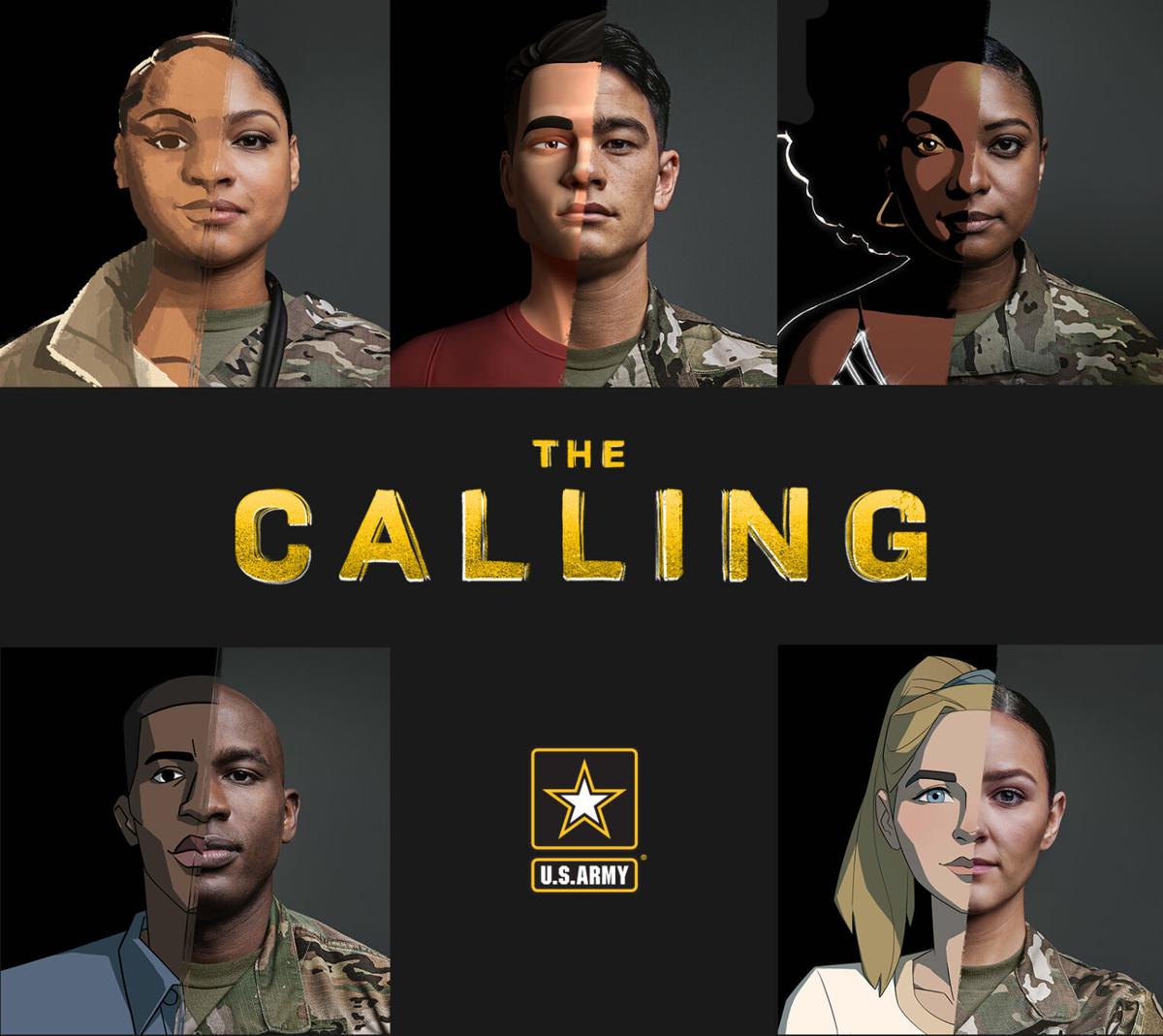 David Toguchi is in the top center position in this photo from “The Calling.”

David Toguchi, pictured on the back of a Chinook, along with Abby, also a helicopter pilot. The two recently married.

David Toguchi is in the top center position in this photo from “The Calling.”

Were this iconic patriot resurrected he need be more specific: the U.S. Army wants Black, Hispanic, Asian and white women and men ready to be trained in a range of jobs and professions leading to a military or civilian career.

To spread the word, the Army marketing office has launched “The Calling,” a slick video series aimed at recruits with more dreams than direction. The five chosen to explain their calling showcase racial and gender diversity: Three are women; one was raised “strong” by “two moms,” whose wedding is depicted in her vignette.

Out of 100 applicants to star in the video, Union Pines graduate (2015) David Toguchi was chosen to represent Asian-Americans. His sequence morphs this handsome 25-year-old 1st lieutenant’s face onto an animated figure acting out his journey, with voice-over, in less than three minutes.

Some of the five recruits, like Toguchi, were rudderless. Others had careers. A Black woman traveled the world on cruise ships, as a singer. A Hispanic woman discovered, “The Army is an army of good people,” when a soldier helped her get home. Nobody rides the patriotism bandwagon. All credit a near-mystical “calling” for sealing the deal.

Toguchi’s segment opens with him, as a child, watching helicopters take off and land at the army base in Hawaii, where his father, a combat engineer, was stationed. Young David dreams of being a pilot, fears he’s not good enough.

“I’m not pilot material,” he says. “I never thought of myself as smart. I struggled. Math and Spanish were really hard,” then slams his school locker door angrily.

Toguchi’s mother was ill, frequently hospitalized, leaving an older brother to advise him. Her death in 2014 intensified his problems.

The video skips the move to Woodlake when Toguchi’s father was transferred to Fort Bragg. David, now a teenager, attended Union Pines where he played football and watched “Black Hawk Down.” He recalls those years as a crisis of confidence.

The light bulb went off during a road trip, when David’s brother, already in uniform, convinced him to stop making excuses, shape up physically and mentally, set goals and follow them. David enlisted upon graduation and attended East Carolina University, participating in ROTC. His study habits improved, as did his attitude and confidence.

Once again, he pictured himself in a cockpit.

After receiving his commission in 2019, Toguchi attended flight school for 14 months where he learned to pilot a Chinook. The first week of training he met Abigail, the young woman who has just become his wife. Their wedding took place in Bear Creek. She flies a Black Hawk. “We speak the same language,” Toguchi says.

As the segment concludes, the animated version of Toguchi buckles his helmet and walks confidently towards the aircraft. “It doesn’t take a genius to be a pilot. It takes time and effort. I made the right choice. I’m so thankful for the opportunity the Army provided. I answered my calling.”

Lift-off. Fade into the sunset. Wipe away a tear.

The five participants in this first-of-its-kind campaign were chosen for their relatable stories, says Nikki Kavounis, of Fleishman Hillard, which produced the video, the logical platform for reaching the appropriate audience, she adds. The Army realized a need for a different approach when, in 2019, they experienced a 10 percent decline in recruiting. Fleishman Hillard, a global public relations/marketing firm representing Krispy Kreme, FitBit and many humanitarian initiatives, had just landed the U.S. Army 10-year $4 billion account. Team DDB, led by DDB Chicago and a team of other agency partners work to personalize and sell their “product.”

Toguchi was flown from his base in Honduras to Los Angeles for a week of interviews, rehearsals, photos and, finally, recording the voice-over with the proper inflection.

During the process, to insure authenticity, the producers used Toguchi’s own words to craft the script.

“They never tried to influence me,” he says. “It was a hand-in-hand process. The script resembled what we talked about in the interview. They checked every word I said.”

The five participants bonded. They stay in touch through social media.

The result pushes all the right buttons: An easily absorbed dialogue employing logic and psychology leads the horse to water, gently, then convinces him or her — with an emphasis on her — to sip.

So scram, Uncle Sam. Bye-bye Hawkeye, Klinger and “Hot Lips” Houlihan, the slap-happy “M*A*S*H*” unit. The U.S. Army is promoting fulfillment on a higher level to recruits who, like 1st Lieutenant David Toguchi, rise above gritty circumstances and personal challenges to answer … a calling.