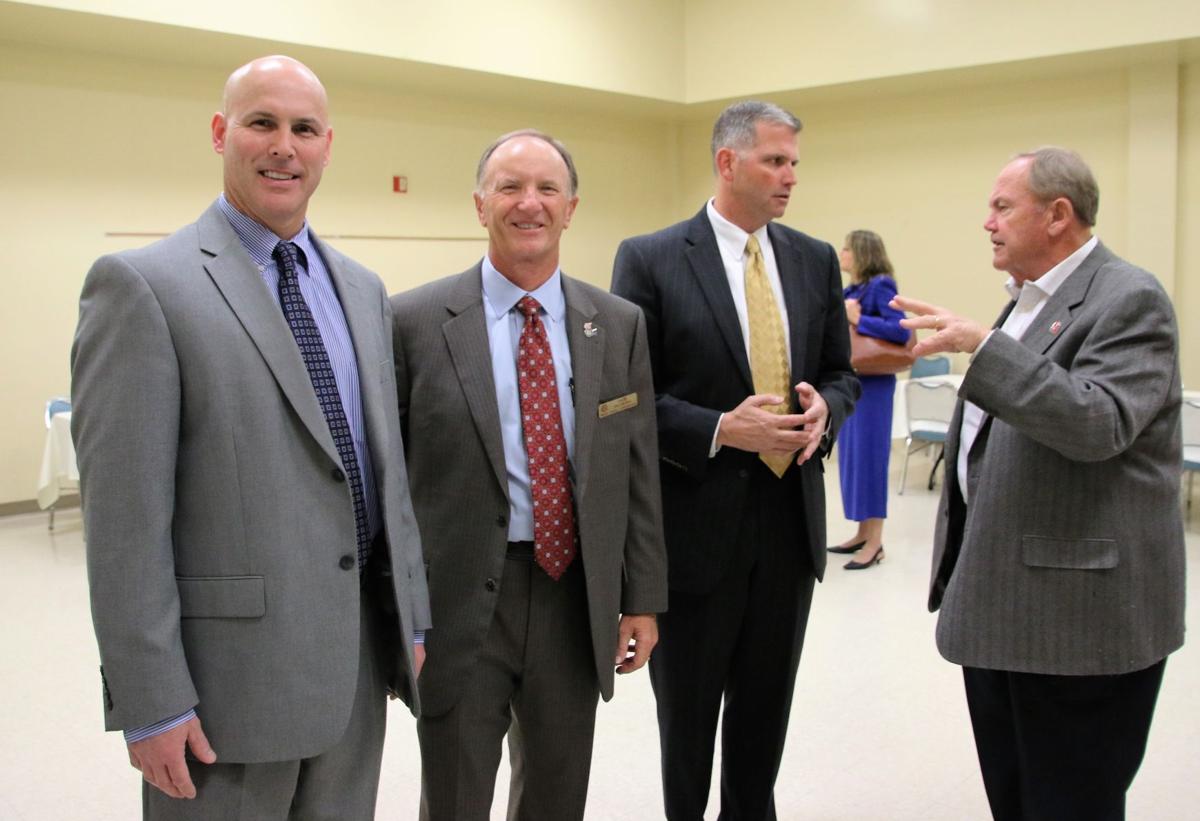 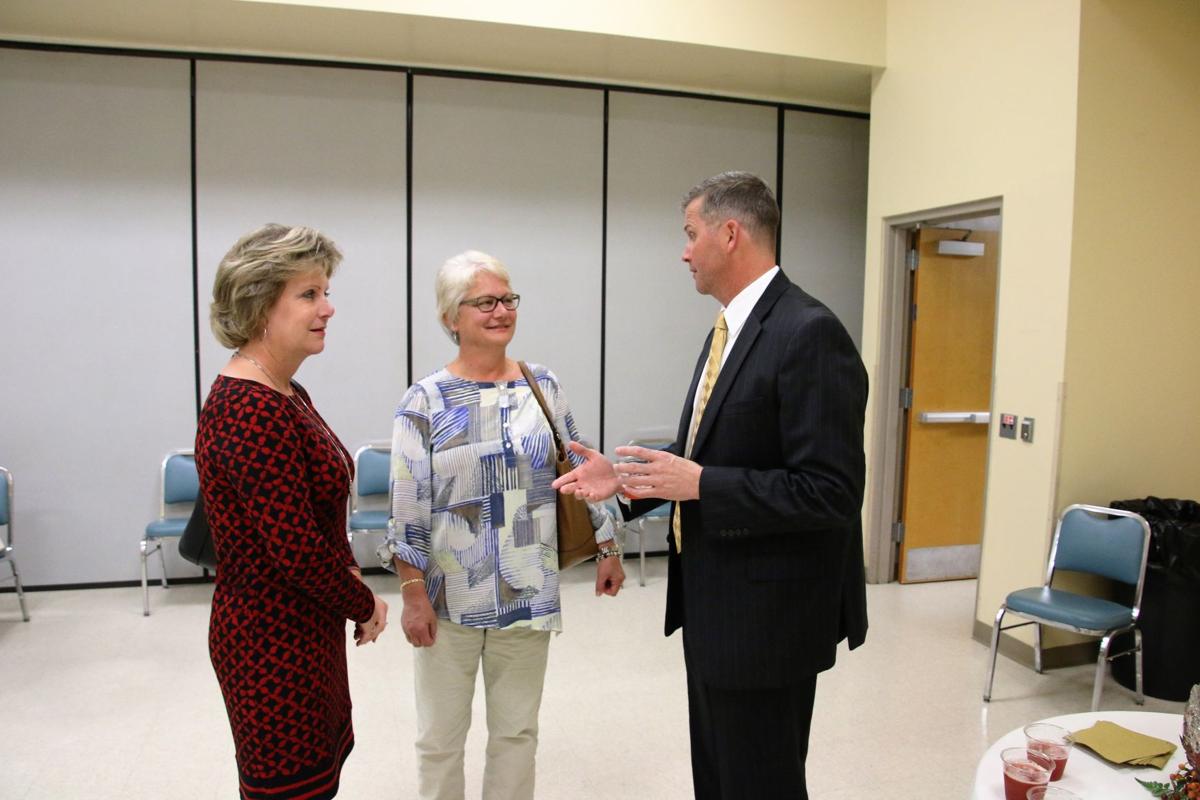 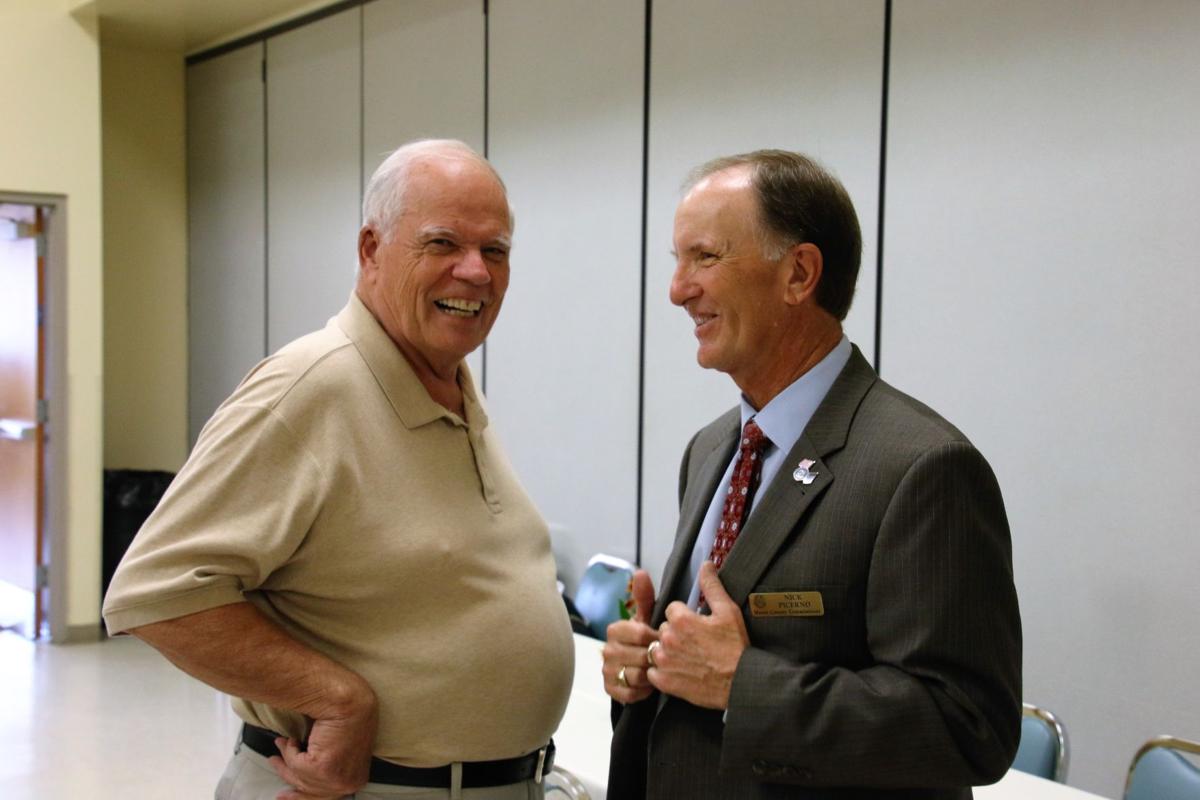 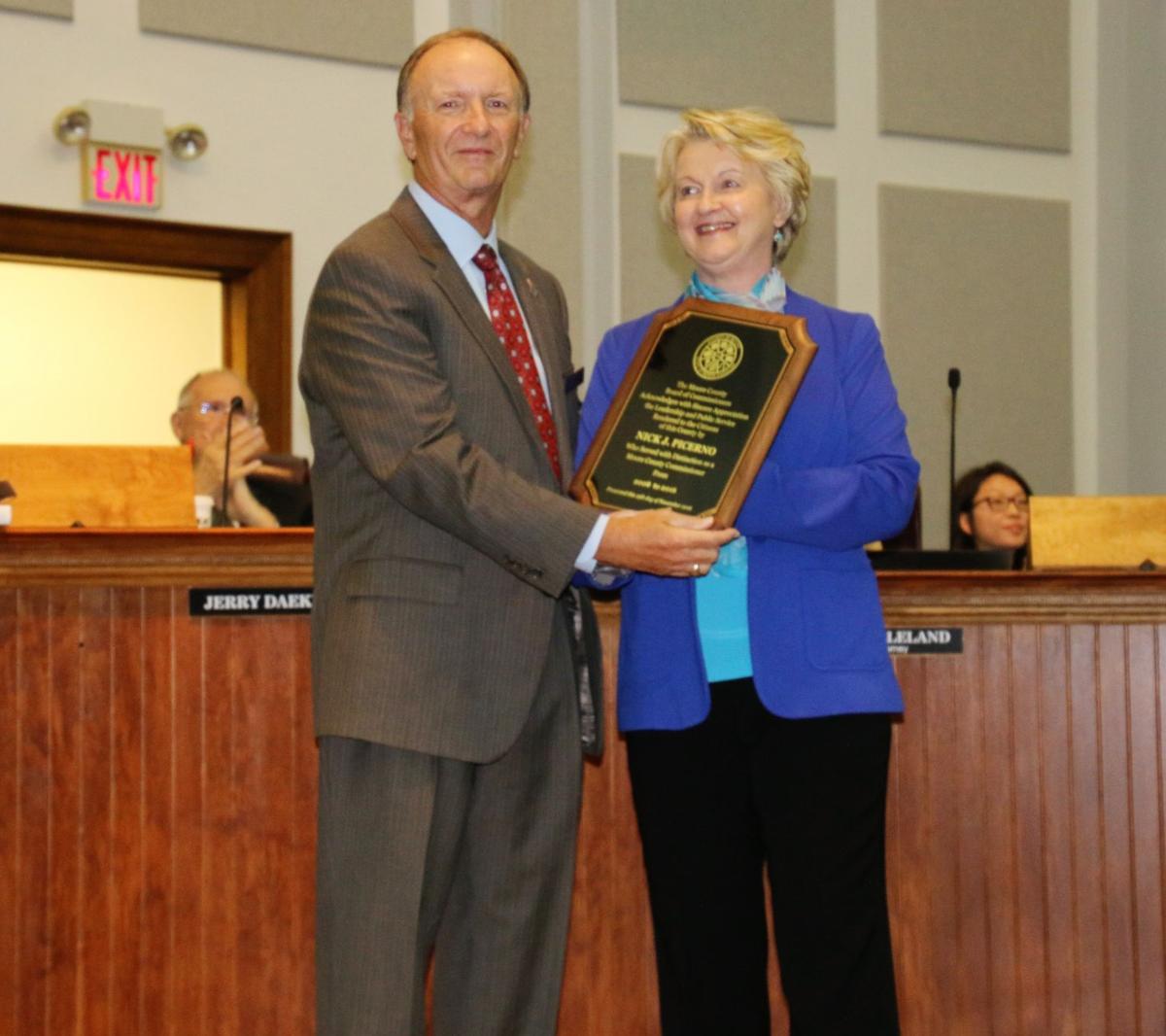 Commissioner Catherine Graham presents a plaque of appreciation to Nick Picerno during the board meeting last month. 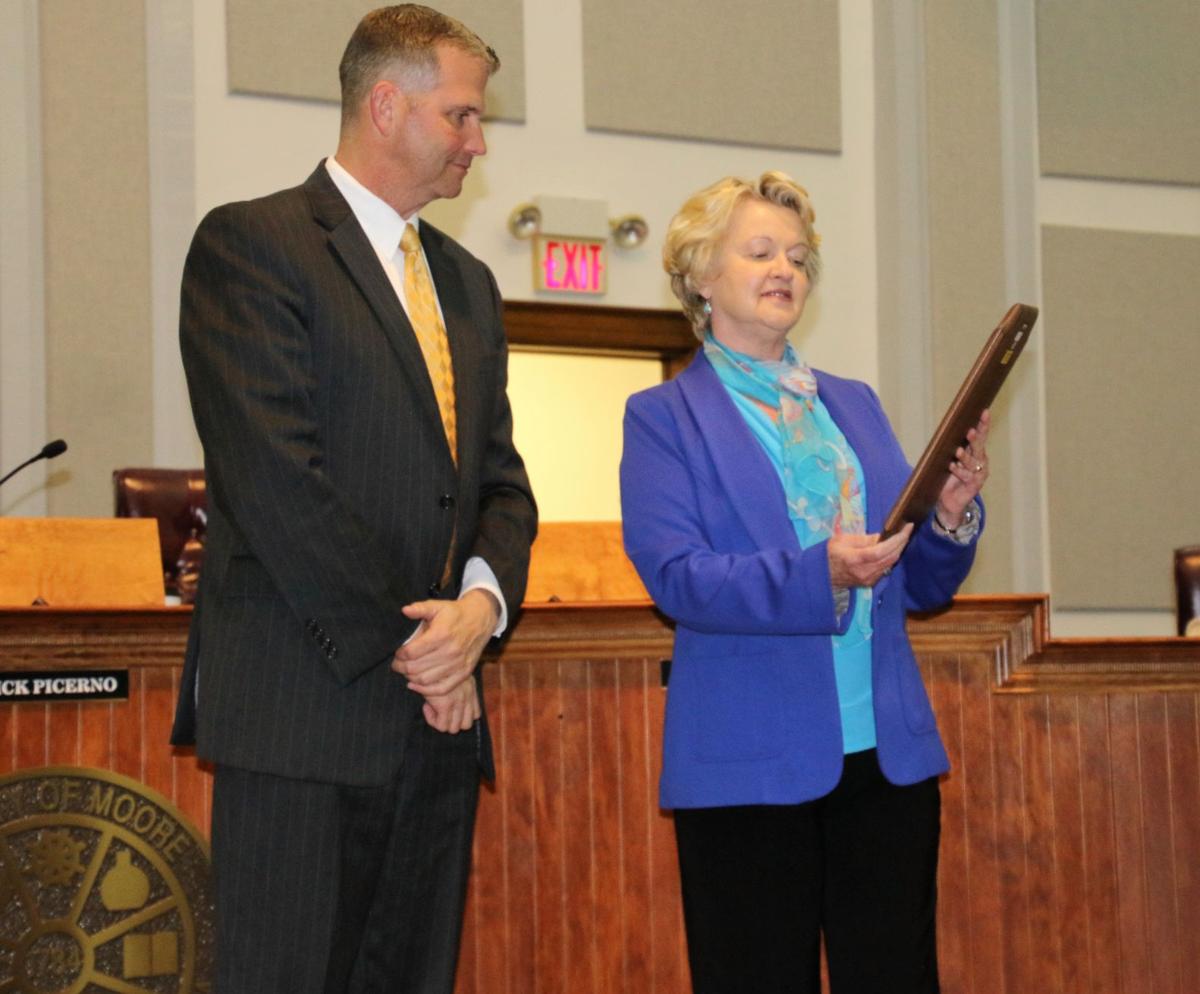 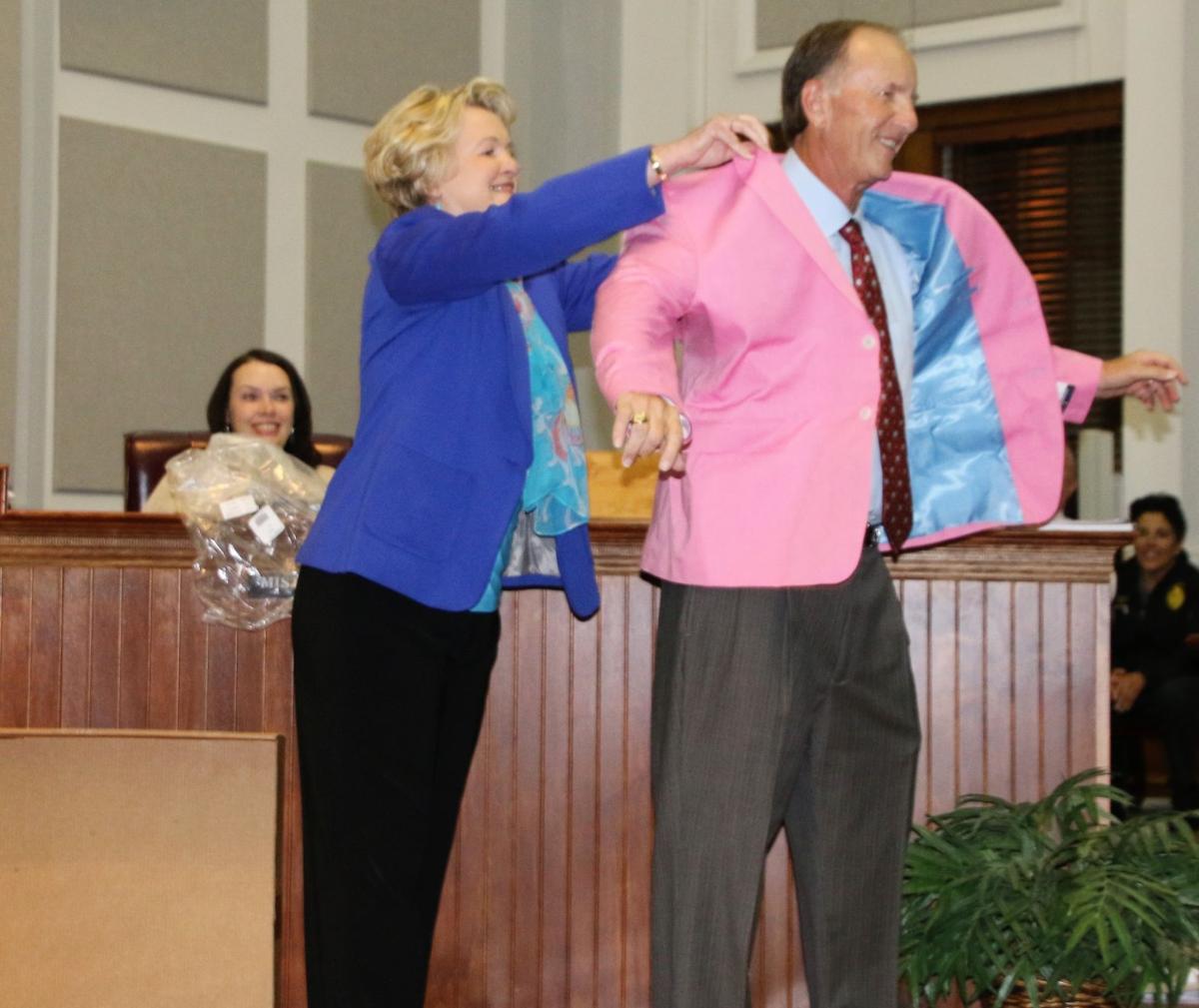 Commissioner Catherine Graham presents Nick Picerno with a pink blazer as a parting gift from the board. 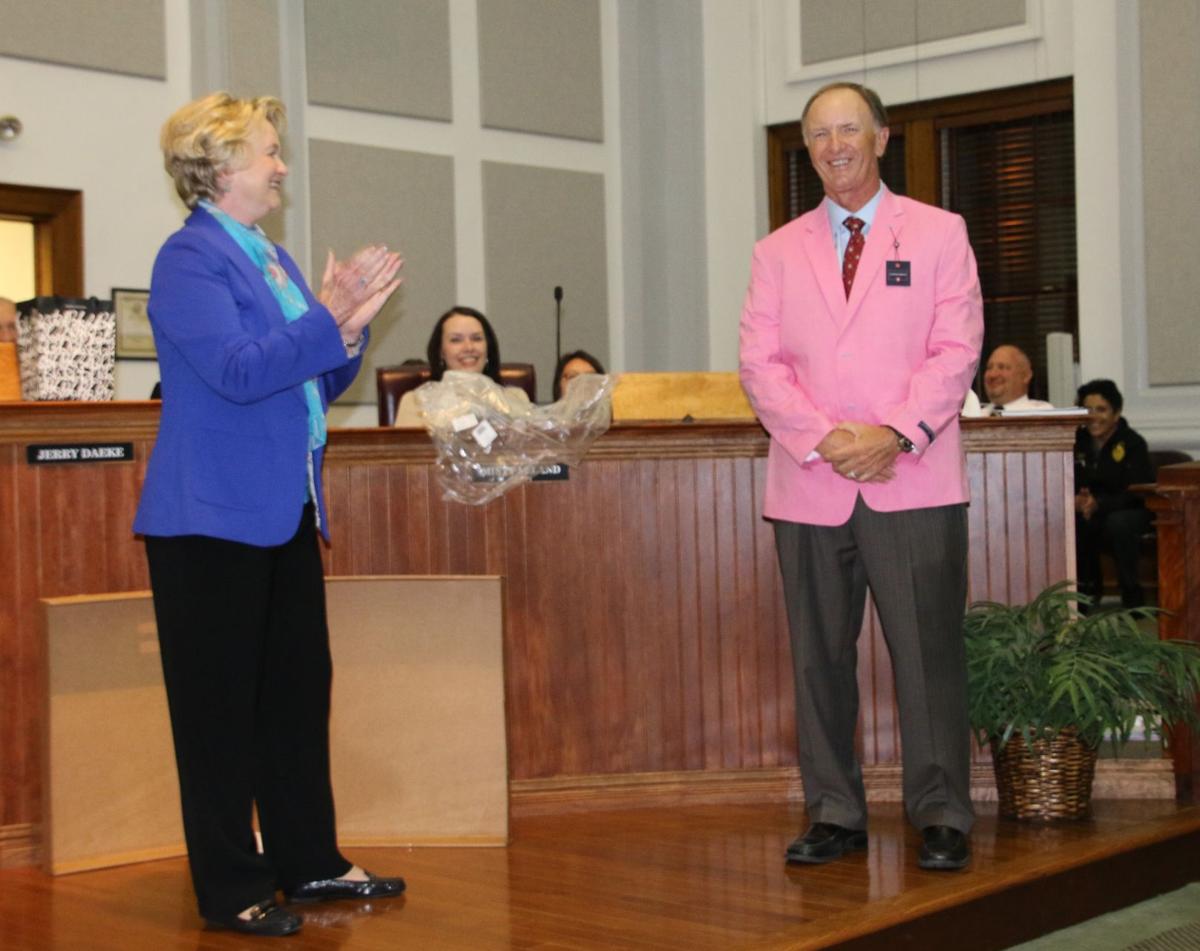 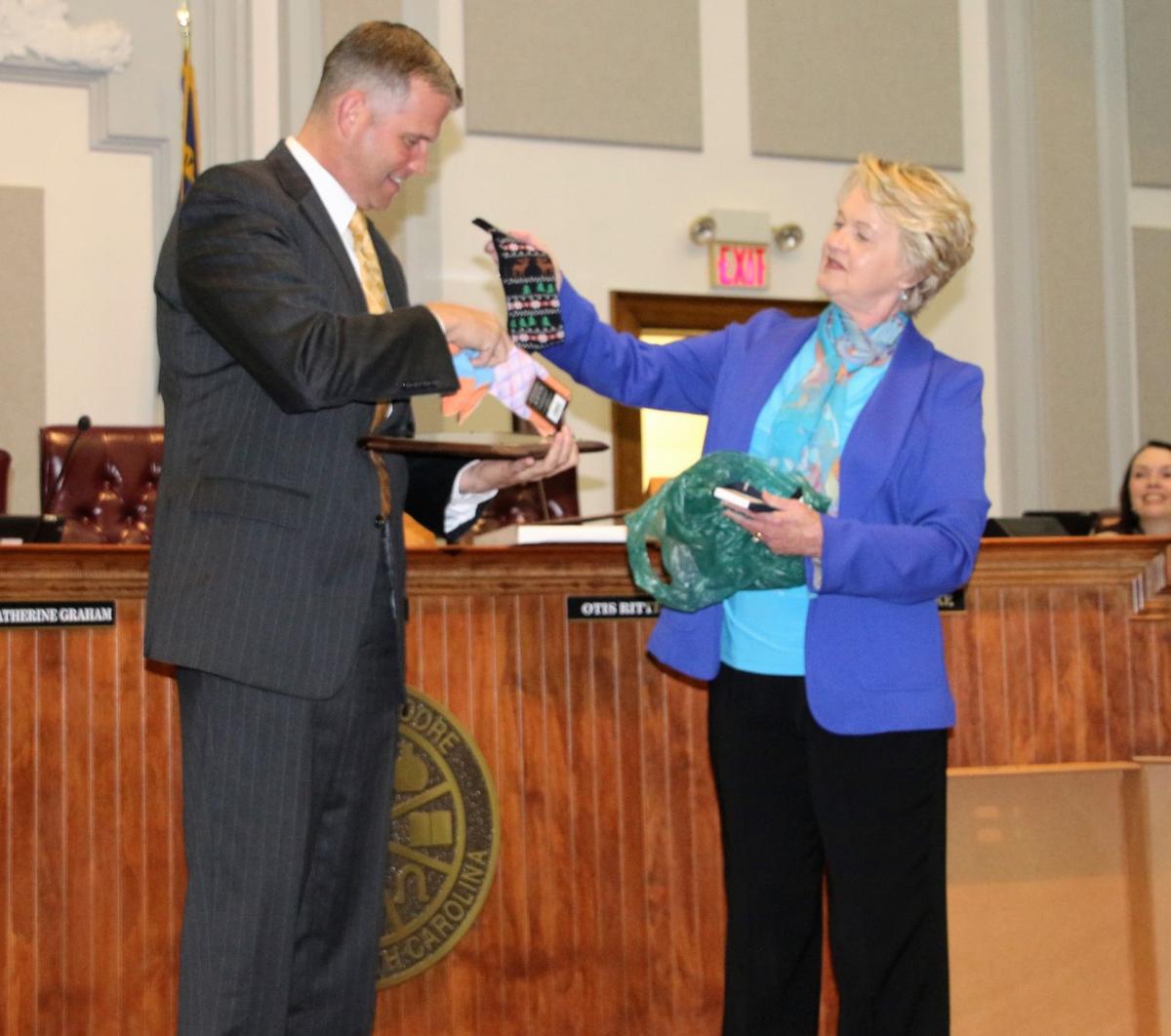 Commissioner Catherine Graham presents a plaque of appreciation to Nick Picerno during the board meeting last month.

Commissioner Catherine Graham presents Nick Picerno with a pink blazer as a parting gift from the board.

Nick Picerno and Randy Saunders bid farewell Tuesday night during their final meeting on the Moore County Board of Commissioners.

Picerno has served eight years, including five as chairman. Saunders, the vice chairman this year, has served four years. Both decided not to seek re-election.

Earlier that afternoon, the county held a reception at the Agricultural Center to honor the two retiring commissioners.

"I will cherish this night for a long, long time," Picerno said during the time for commissioners' comments at the end of the meeting. "It's really strange this eight years has gone by so fast. I look back on all the things we had to accomplish."

He cited the construction of the $32 million Rick Rhyne Public Safety Center and reaching a deal with Harnett County to provide the county with enough water to meet its needs for decades.

Picerno said he is "totally confident" that new commissioners Louis Gregory and Frank Quis will do a good job.

"I am looking forward to their leadership, in addition to the three outstanding commissioners you'll be joining," he said. "They are very smart. They are very capable."

Both Picerno and Saunders offered words of praise for county employees.

"I want to say from the bottom of my heart, the staff we have, the employees we have in Moore County, I'd fight for those people," Picerno said. "I do anything for you at any time. ...They're just amazing people. We are just so blessed to live in this tiny place in North Carolina that has some of the brightest and the best.

"I'm glad I was born and raised here. I am glad my kids will grow up here. And I have every confidence going forward they'll be looked after."

Picerno turned and looked back the words "In God We Trust," that the board approved placing on the wall behind them.

"It is one of the best things we've ever done," he said.

Saunders said it was a "bittersweet night" but that he felt it was time to "take a little break."

He had cited the amount of time he must be away from his family and business as the reason for not seeking another term on the board. He had previously served on the Whispering Pines Village Council.

"It has been an honor," he said. "You try to do your best. I think that is all anyone can ask. You put everything you can in it, and I've tried to do that. I'll miss the staff and the other commissioners. Like every elected official, your time comes. Someone will take your seat and have great ideas and come up with ways to keep our county strong and moving ahead."

Saunders said there are always challenges when a board changes.

"The new board will have challenges and they'll have successes," he said. "I'd like to think I have helped a little bit over the last four years. I'll take a break for a little while, and maybe show up again someday somewhere."

Earlier in the meeting, Graham present plaques of appreciation to Picerno and Saunders. She also presented each with a gift -- a pink jacket for Picerno and "happy socks" for Saunders.

Picerno joked later in his comments at the end of the meeting that he felt like he was "really shining tonight" as he sported the new blazer.

During the public comment period at the start of the meeting, Ernie Hussey of Robbins, thanked Picerno and Saunders for their service. He said most people don't realize what a hard job it is to sit in those chairs.

"Five percent of the people in Moore County make it hard for you," he said. "Most everybody else is pleased with what you have done."

Hussey said Moore County has the best quality of life in the state and a low property tax rate, which make this "a great place."

"You two have really made it happen," he said. "Your footprints are all over Moore County. Don't go and hide because we need you."

In other business Tuesday night:

* The commissioners voted unanimously to proceed with a planned Nov. 30 public sale of up to $10 million in bonds to refinance U.S. Department of Agriculture loans for the East Moore Water District.

But because interest rates have started to creep up since the election, the board included a provision to back out should rates exceed 3.85 percent.

The county's financial adviser, Davenport & Co., had projected a rate of 3.63 percent, which would result in a savings of $1.36 million over 30 years.

Ted Cole, with Davenport, said interest rates have been "volatile" since the election. He suggested setting a cap on the interest rate the board would be willing to accept.

"If interest rates keep going up, savings erode to the point it is probably not worth doing it," he said.

Cole said they should have a better idea about the interest rate picture by Nov. 28 or 29 and decide "whether it makes sense to pull the trigger on this." He said it is possible rates could also go down.

* The commissioners approved a request from Public Safety Director Bryan Phillips to seek reimbursement from the Federal Emergency Management Agency for expenses incurred in responding to Hurricane Matthew last month.

Phillips said department heads are compiling the expenses. It will also include expenses related to emergency at Woodlake dam. A large section of the concrete spillway eroded, prompting fears the dam might fail.

He said the county hopes to have its estimates compiled by Friday.

* The commissioners voted to reject offers of $2,000 each for two lots near Seven Lakes West that the county no longer needs for well sites.

Commissioner Jerry Daeke, who had raised concerns about the offers, said he, County Manager Wayne Vest and Tax Administrator Gary Briggs went out to see the lots last week. He said the tax office looked at recent sales of lots in that area, which showed lots selling for $15,000 to $25,000.

"There should be a higher offer than what was made," Daeke said.

The Seven Lakes West Land Owners' Association made the offers.

Vest noted that the lots are not actually in Seven Lakes West, but they could be taken in. That would allow memberships to be included, making the lots more valuable.

The commissioners asked the land owners' association to consider making a higher offer for the two lots.