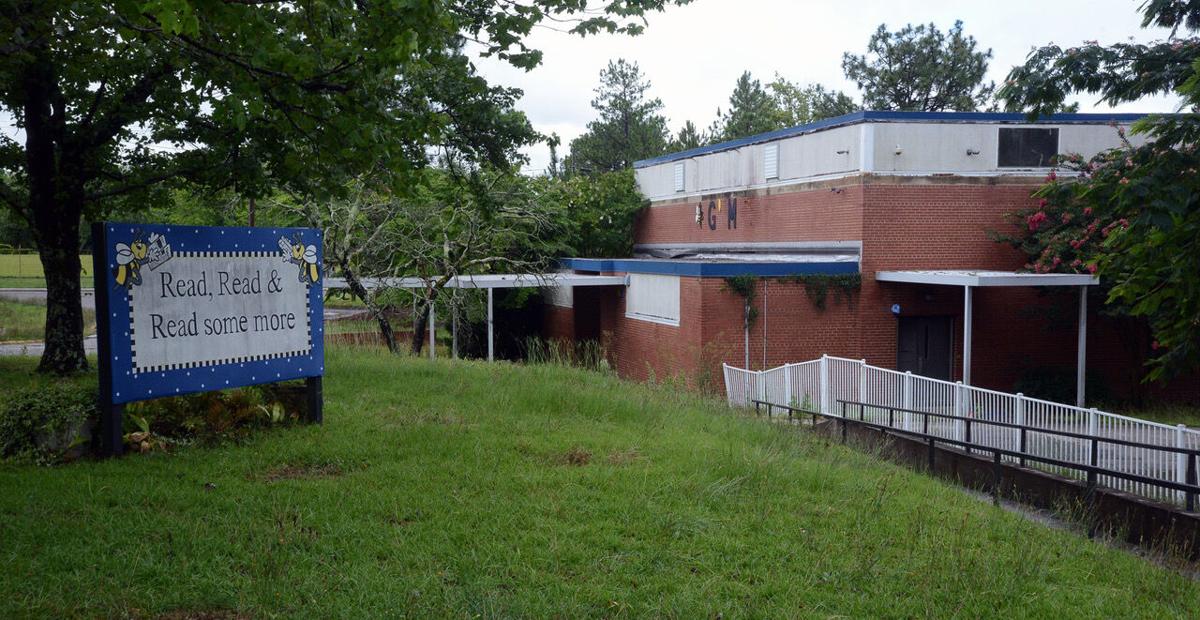 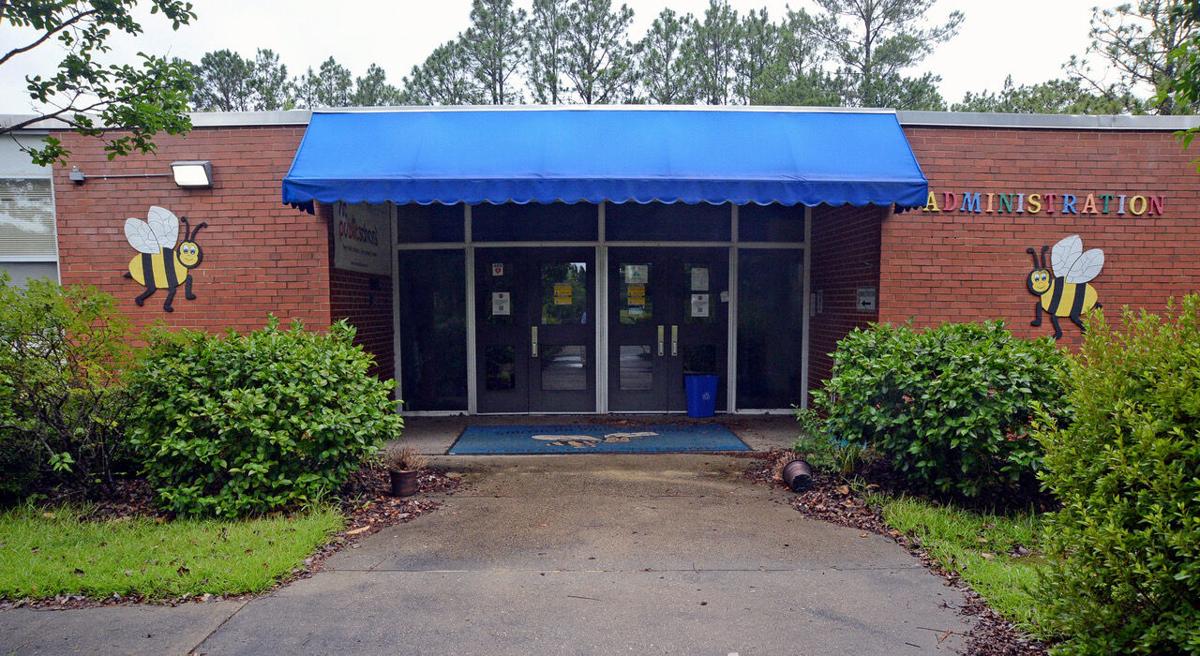 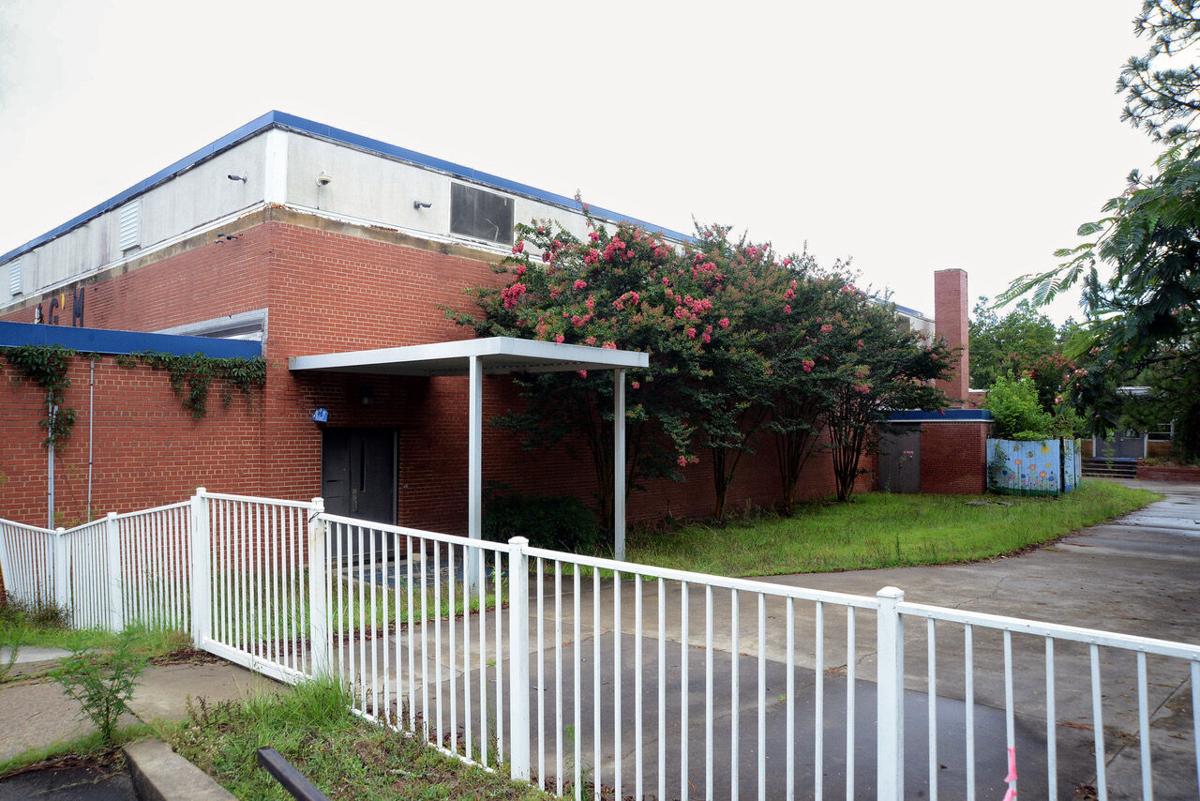 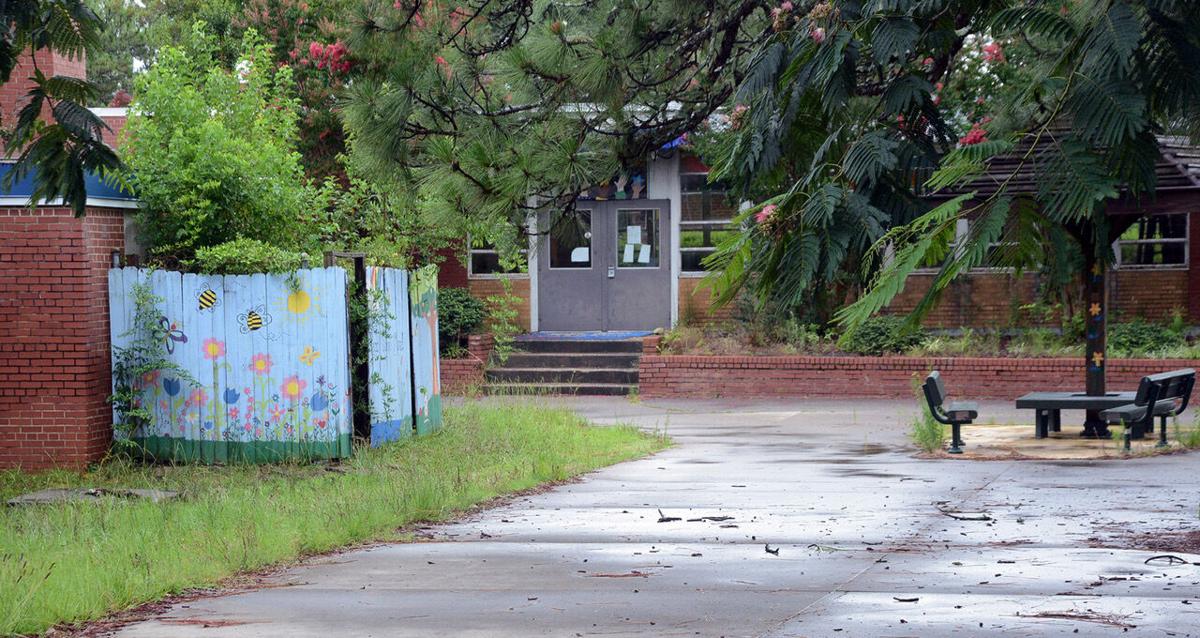 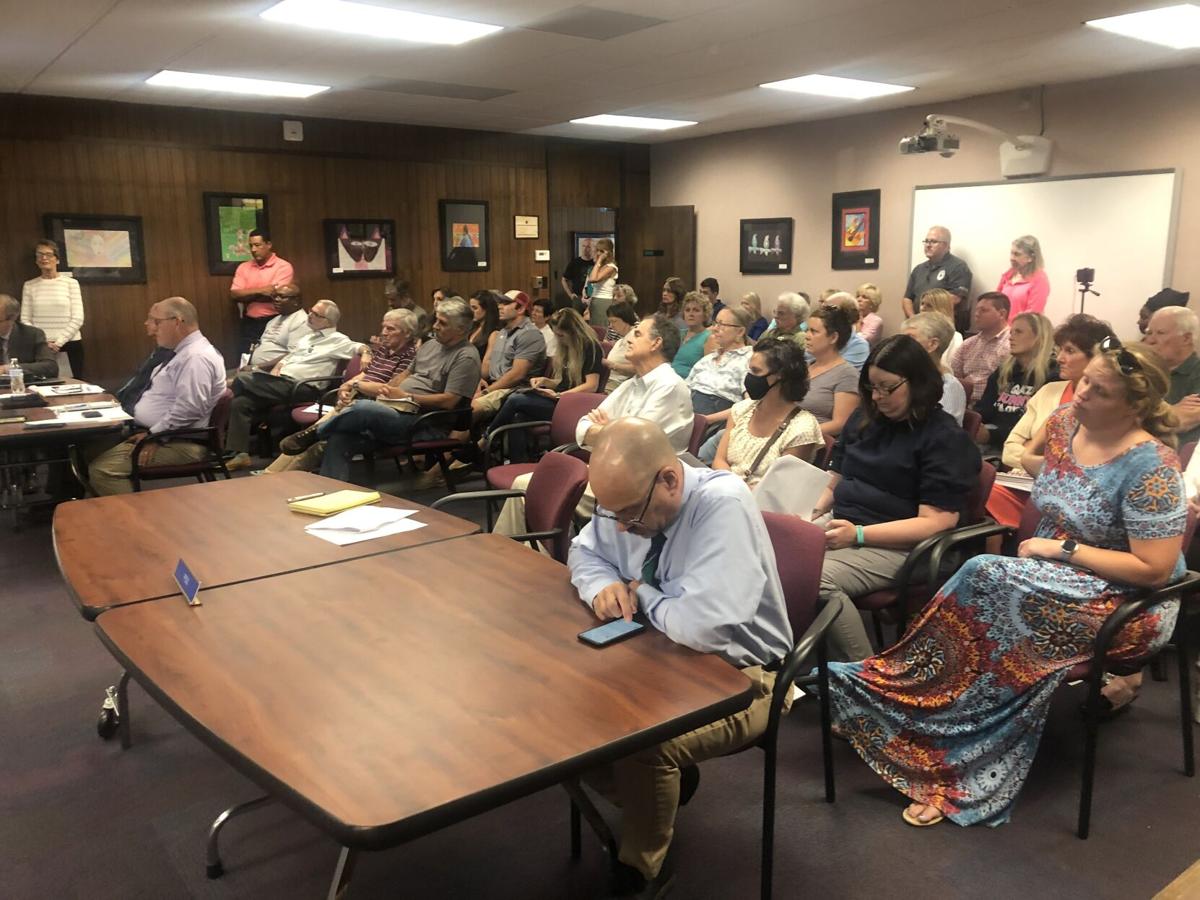 Attendees spilled from the Moore County Board of Education's meeting room into the halls of the central office Monday evening as they waited to address the board on Critical Race Theory, the Southern Pines Land and Housing Trust's offer to buy Southern Pines Primary, and in support of Moore County Schools' military family liaison position. 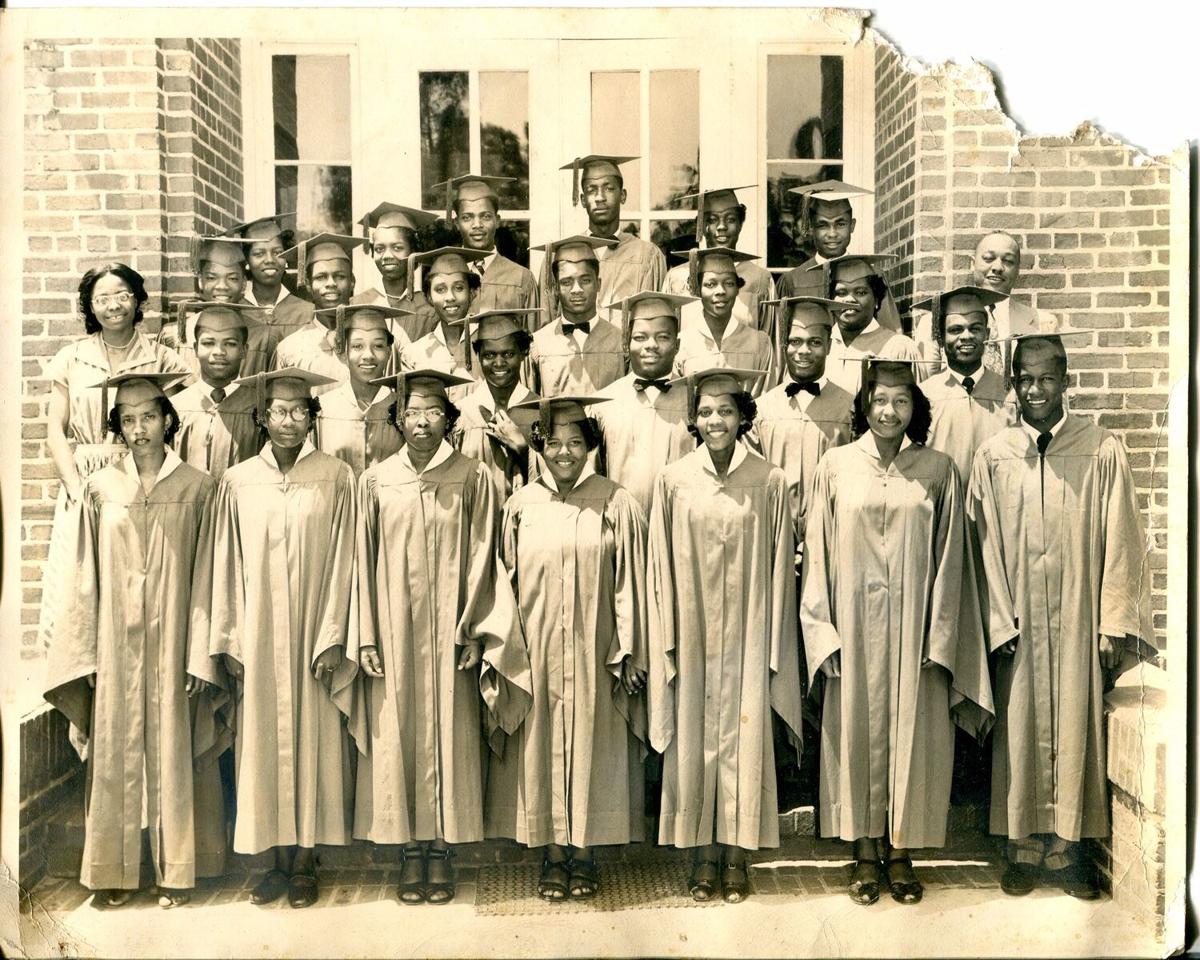 The West Southern Pines Colored High School Class of 1949. Veola McLean, a supporter of the Southern Pines Land and Housing Trust's vision for the old school campus before her death earlier this year, is in the front row second from left. 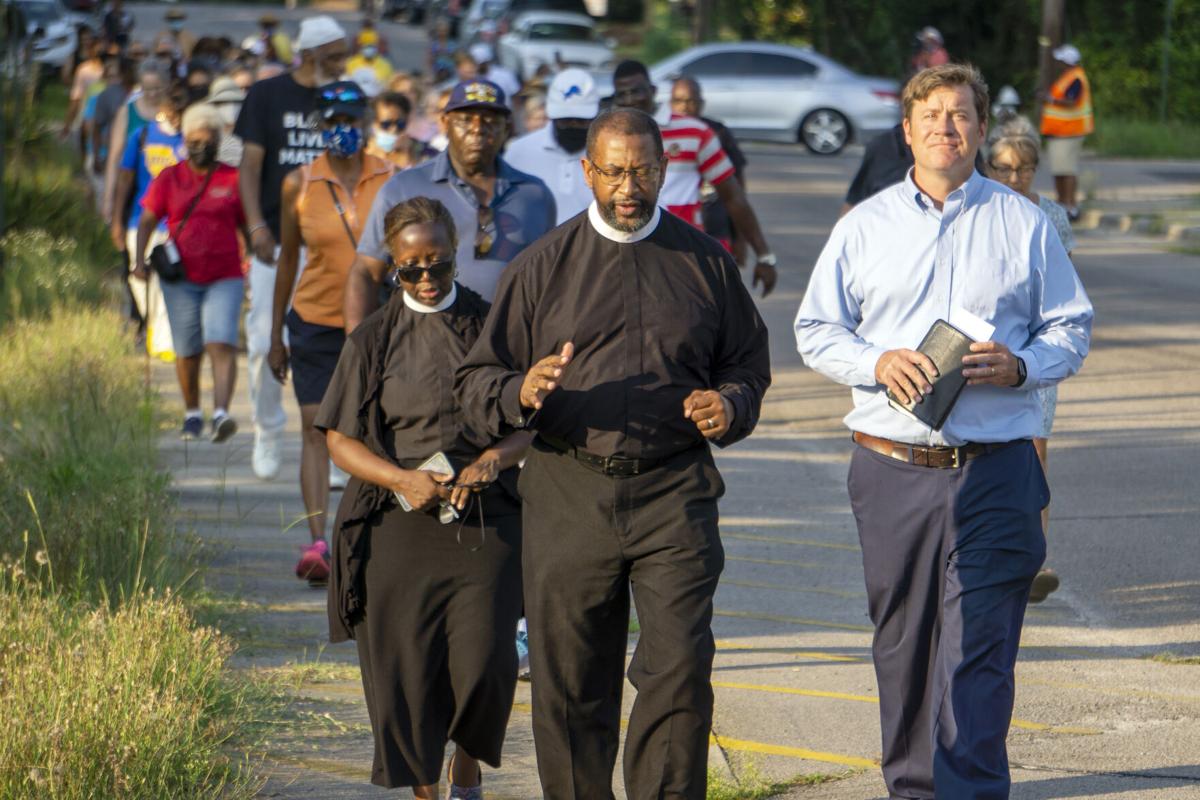 When the Moore County Board of Education first set out to divest itself of four no-longer-needed schools in Aberdeen and Southern Pines, its primary goal was to make money to put toward repairs, maintenance and upgrades at the district’s other campuses.

That was still the case on Monday when the board effectively declined the Southern Pines Land and Housing Trust’s offer to buy the old Southern Pines Primary campus on Carlisle Street for $525,000.

The trust’s most recent offer, though higher than earlier ones, is less than the 17-acre campus’ value as assessed in two appraisals that Moore County Schools has commissioned in the last two years.

Before the board voted on Monday, 15 land trust supporters asked members to consider the historic significance of the property, where a Rosenwald school occupied four acres from 1924 through the 1940s. Hundreds of Rosenwald schools, supported by the industrialist and philanthropist Julius Rosenwalkd, focused on educating African Americans in the early 20th century. Few remain standing, and the original Southern Pines structure was torn down decades ago.

Nonetheless, school supporters urged the school board to weigh the long-term benefits if the land trust is successful in establishing the world-class center for African-American culture and community education that it envisions instead of a cluster of homes, the most likely alternative.

“When you erase a culture, it hurts the American culture as a whole. Because everyone’s culture made up that greater culture. We are all Americans, we are all proud, we are all patriots and we all deserve to have our cultures preserved,” local resident Ariadne DeGarr said in addressing the board.

“I understand that you may be entertaining higher bids, but I need you to understand that taking that higher bid over doing what’s right — with a bid that’s comparable, it may not be quite as high as the other — rather than working with the people, that you are doing irreparable damage.”

Vincent Gordon, the trust’s board chair, has lobbied the school board for months to support his organization’s efforts. He said that the trust’s offer represents support from across Moore County with donations ranging from pocket change to $150,000.

“This is a grassroots effort that is now supported by citizens, churches and institutions across the county with varying ethnic and socioeconomic backgrounds that came together in one cause: to lift up one community and let it help itself,” said Gordon.

So it was over audible groans and sighs from the land trust’s supporters that the board resolved in a 5-2 vote to open negotiations with the land trust dealing with only part of the campus: five acres at the corner of Carlisle Street and West New York Avenue.

That parcel includes the gymnasium, auditorium and some classrooms. Of greater significance to the land trust, 3.6 acres of it was once the site of West Southern Pines’ Rosenwald school.

Moore County was at one point home to 16 Rosenwald schools. The original school building was torn down to make way for West Southern Pines High School, built for Black students before school desegregation.

But more pertinent for some on the school board — and any potential buyers — future use of that 3.6 acres is bound by covenants limiting it to the purposes of “negro education.”

Board member David Hensley suggested the resolution as “a very natural compromise to this whole situation.” That’s something of a shift from his characterization of the potential sale. As a candidate for the Board of Education last year, he called any sale to the trust “a crack deal.”

The district’s most recent appraisal of the Southern Pines Primary campus valued that parcel at $300,000. The other 5.6 acres adjoining it are valued at $325,000, and the 2.7 vacant acres opposite West Indiana Avenue are valued at $60,000.

Another offer came in for the school on Monday, just as the school board was wrapping up its morning work session. Quality Built Advantage, Inc. indicated in an email that it would be willing to pay $600,000 for Southern Pines Primary.

The school board can’t enter into direct negotiations with a private entity without a bidding process to help pinpoint the property’s true value and identify the highest bidder.

The construction company’s owner, Ron Jackson, was an active bidder on the school’s Aberdeen counterpart. A limited liability company that Jackson also owns bid up to $400,000 for that campus but was outbid by the Raleigh-based Network Commerce Association.

Board members took on a congratulatory tone in voting to accept that firm’s $473,100 bid as final and pursue a sale of Aberdeen Primary for that price.

The Southern Pines Land and Housing Trust’s offer for Southern Pines Primary was based on the final bid for the Aberdeen school, since both primary schools appraised at similar values back in 2019.

But so far the school board hasn’t been receptive to that approach, or the argument that more than half of the land comprising the campus was donated in the first place.

“I know that the land trust wants the entirety of it. There’s no question that that is what they want, but unfortunately we have to think of all the students of Moore County as well as the interests of the people of West Southern Pines,” said board member Robert Levy. “I think this forms a very, very good compromise.”

Board Chair Libby Carter and member Stacey Caldwell cast the “nay” votes, opposing what other members presented as a compromise. During his statement to the board earlier in Monday’s meeting, Gordon indicated that the trust may be willing to move forward with less than the full 17 acres, but the specifics of how much less would be subject to further discussion.

“I’m conflicted because I think we should just go into private negotiations and see what really matters to them,” said Caldwell.

Trust leaders have already said that the small parcel subject to the restrictive deeds is not sufficient to accommodate their plans. But on Monday most of the board endorsed opening bids for the rest of the old campus to determine the highest price the property might command.

That’s not likely to happen until the land trust either agrees to buy the former Rosenwald site or abandons direct negotiations. In the latter case the board might open bids on all 17 acres.

Earlier in the discussion, school board member Pam Thompson also voiced support for the trust. Video of the vote, which came around 10 p.m. after 13 hours of meetings, shows that Thompson did not appear to vote either way and her vote was counted with the majority. 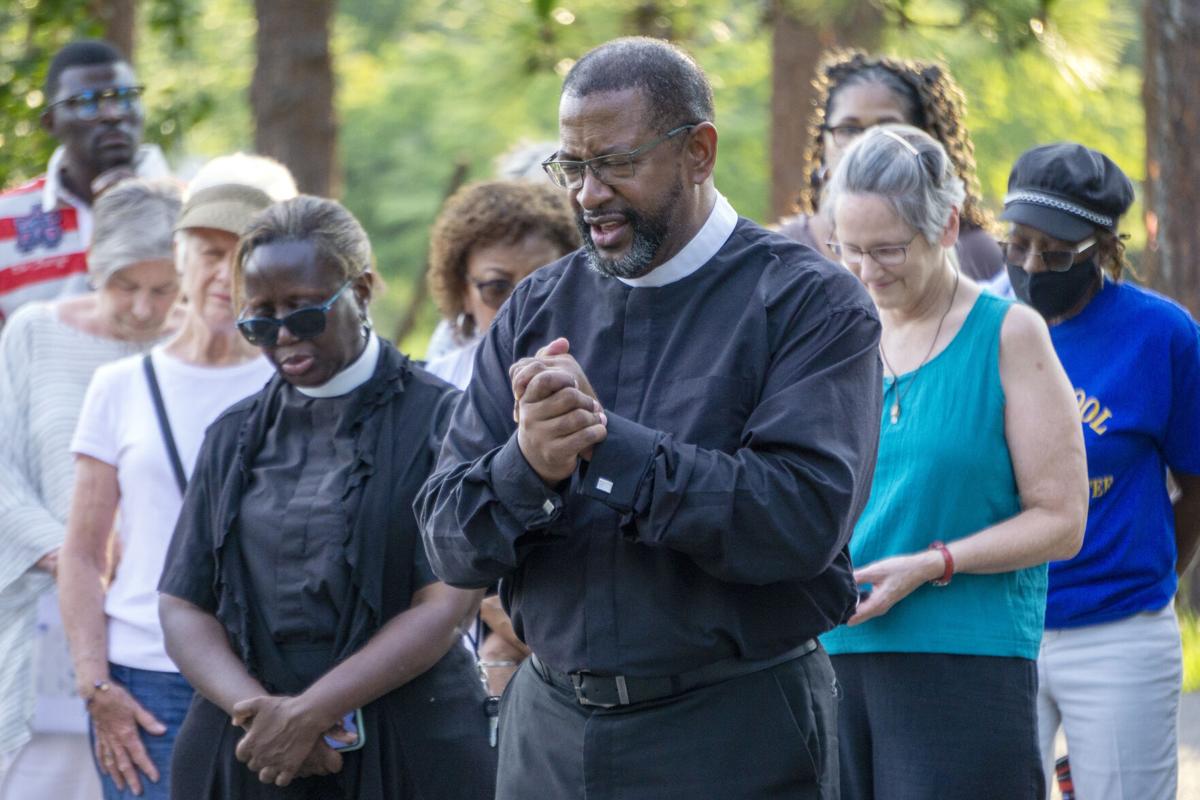 The Rev. Paul Murphy offers up a prayer on South Carlisle Street in West Southern Pines. 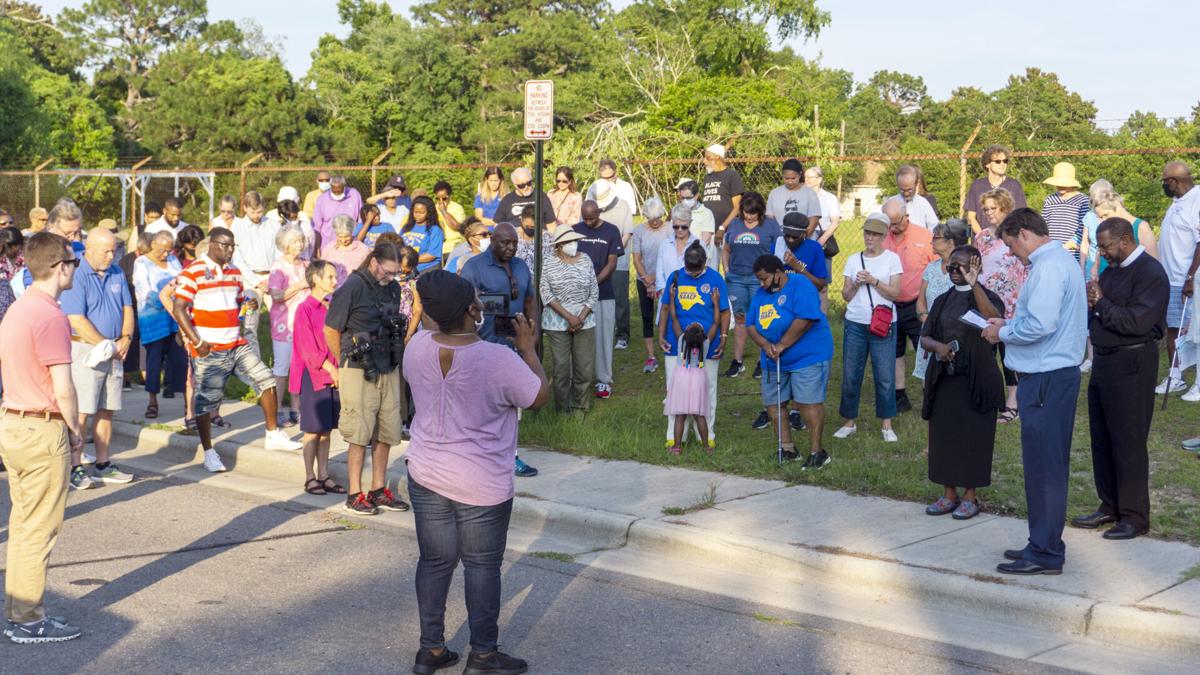 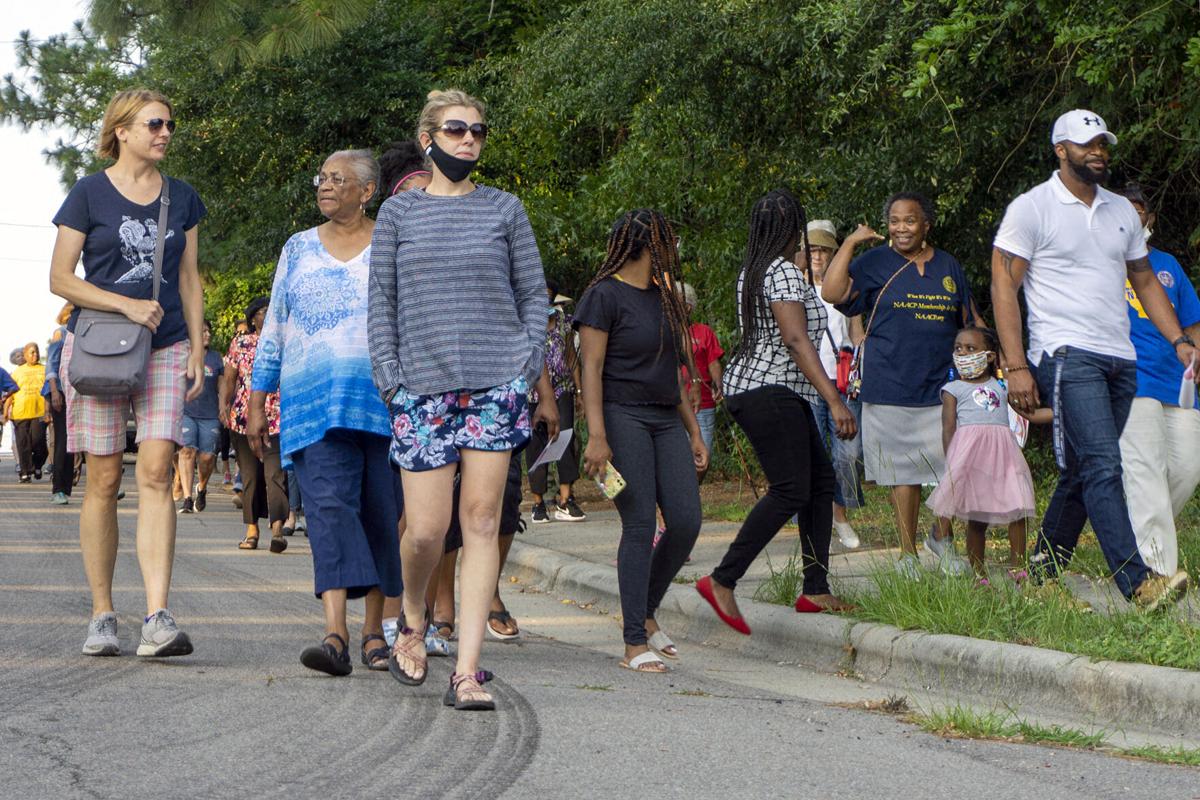 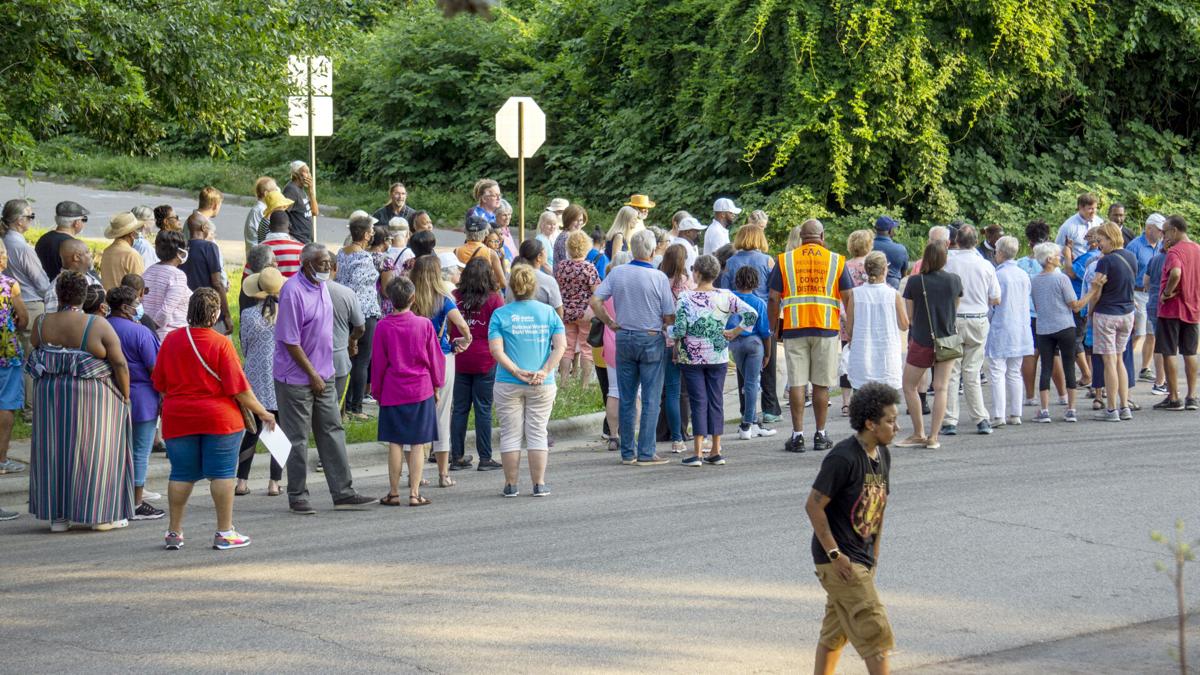 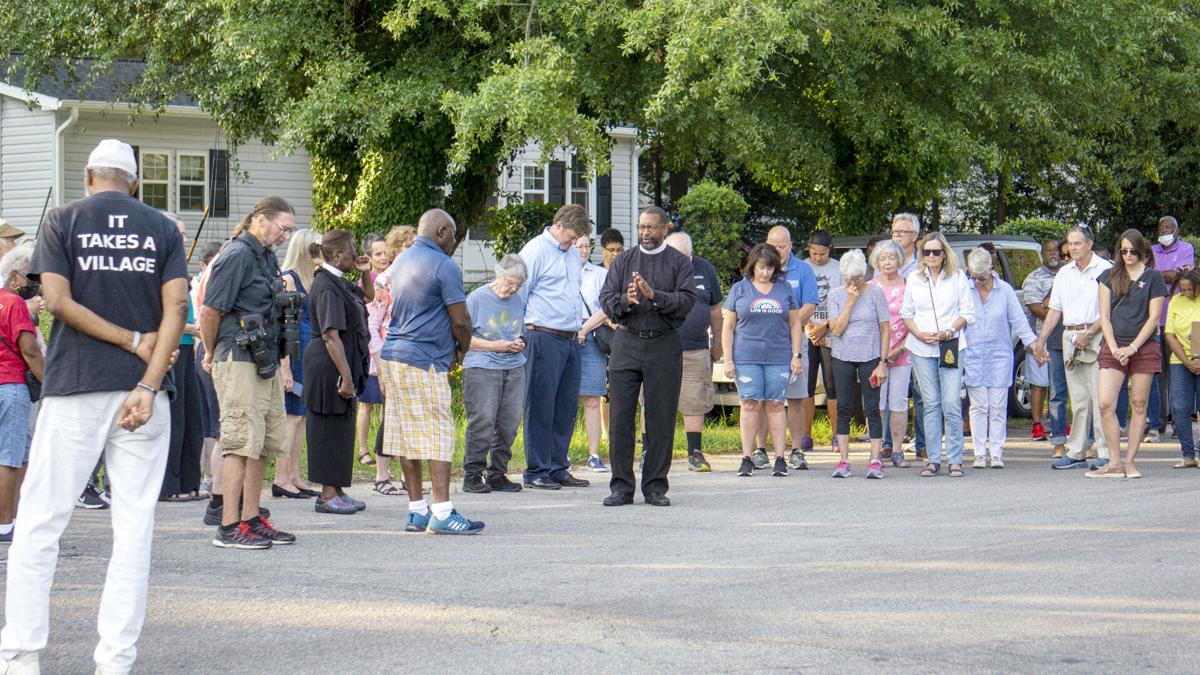 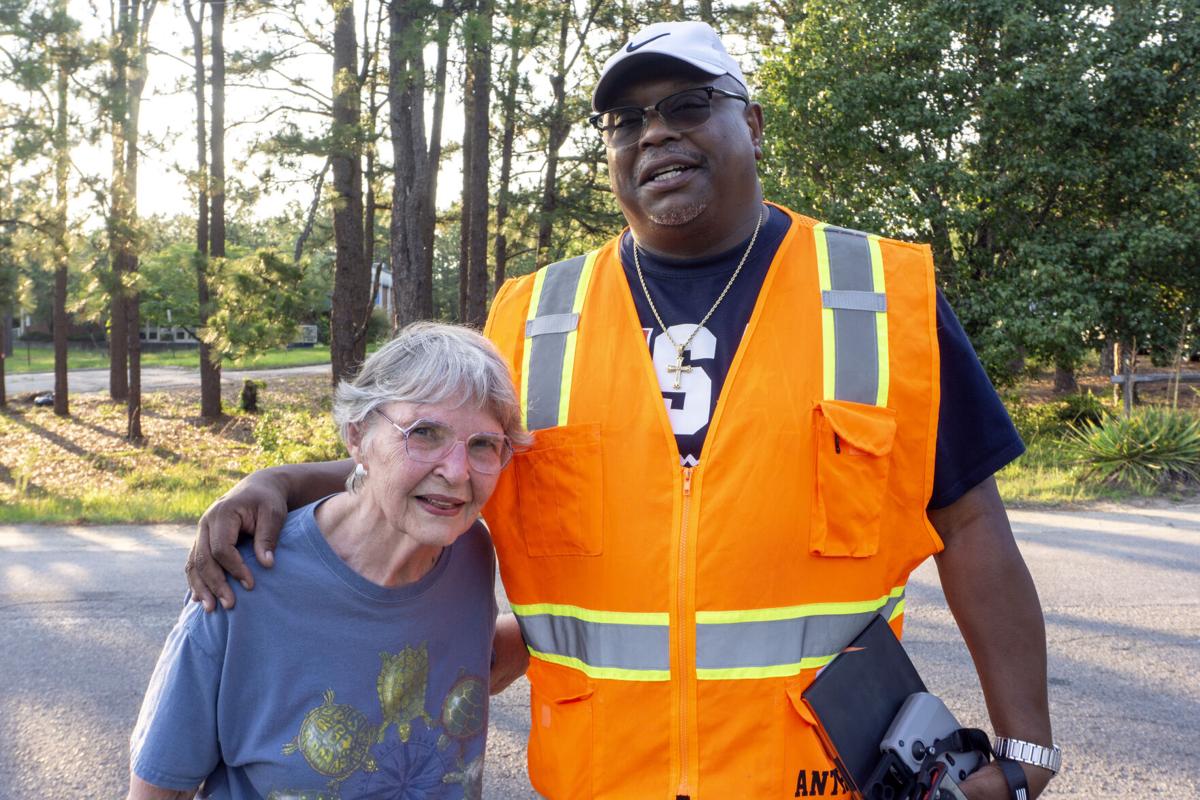 Supporters of a plan to convert the former Southern Pines Primary School into an African American cultural center participated in a mile-long march and vigil near the property on July 6, 2021. The event was organized by the Southern Pines Land & Housing Trust, which is working to purchase the historic school building. (Photographs by Jaymie Baxley/The Pilot)

The Rev. Paul Murphy offers up a prayer on South Carlisle Street in West Southern Pines.

“I truly stand on the side of the land trust. I admire the proposals that they have put forth. They are very far-reaching. They may or may not be reachable, but the planning is there and I commend Mr. Gordon and the troops that have stood with him,” she said.

“I too, like Mr Levy, question where is the town of Southern Pines in this?”

With the sale of the former Southern Pines Elementary complete as of last week, the Moore Co…

This proposed project will potentially add to tourism and jobs in Moore County. The CVB and PIP needs to get involved to help achieve the goals outlined for this project AND support it financially.

The Rosenwald Schools were quite remarkable for their low cost and good academic results. Julius Rosenwald, CEO of Sears, personally provided the seed money and plans for the schools. Local communities though raised the bulk of the funds and built the schools according to the plans, which were simple and efficient. It is a pity that most of the schools were torn down. They remind us that good schools do not have to be expensive and that direct investment by the parents, not taxation, helps engage a community. Government schools that replaced these in the South following desegregation in the early 60s were better built, but not opulent. My high school in Alabama, torn down some years ago, was not air conditioned when I attended it in the early 70s. No one died from sweating, either. Our track was made of cinders and we only had one gymnasium, imagine that. No fancy floor tiles, either. But we got a great education in a diverse school where racial issues were a chapter in a history book. We saw opportunity, not victimhood, in our mirrors.

Kent, you've turned into the old codger who is always saying, "back in my day......" The 21st-century student needs a lot more than a one-room schoolhouse to compete in the world today.