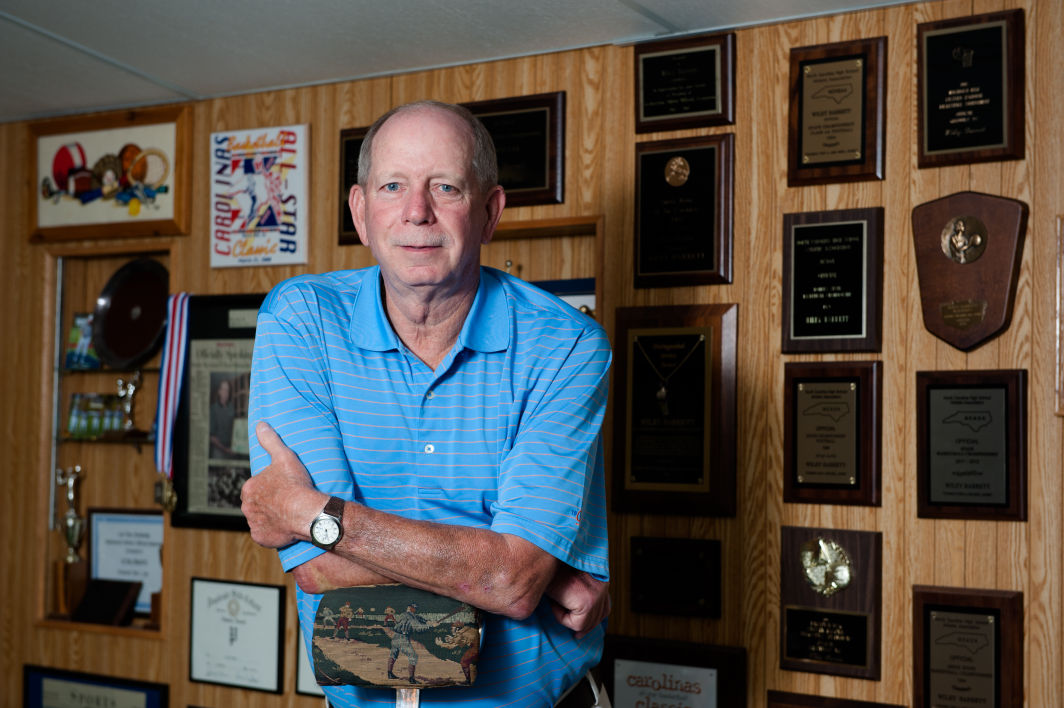 Wiley Barrett, with several of his awards and recognitions in the background, stands for a portrait in his Southern Pines home. 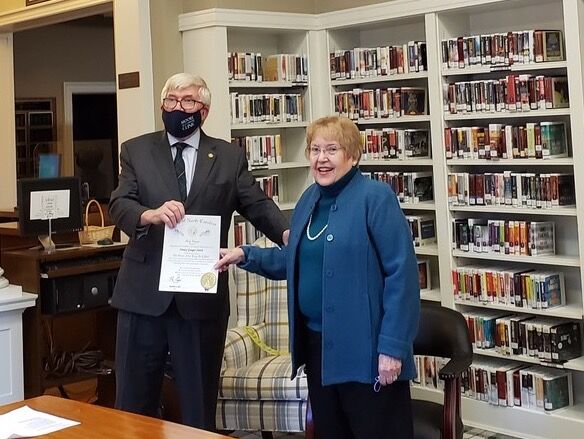 State Sen. Tom McInnis presented The Order of the Longleaf Pine to Nancy Smith at Given Memorial Library on Jan. 19.

Wiley Barrett, with several of his awards and recognitions in the background, stands for a portrait in his Southern Pines home.

State Sen. Tom McInnis presented The Order of the Longleaf Pine to Nancy Smith at Given Memorial Library on Jan. 19.

Wiley Barrett and Nancy Gouger Smith were both due to be presented the Order of the Longleaf Pine earlier in 2020. The award is traditionally presented as a surprise to its recipients in conjunction with a public event or meeting.

But with most of those opportunities on hold last year, Barrett was finally honored in December with a presentation from State Rep. Jamie Boles at his home in Southern Pines. State Sen. Tom McInnis presented Smith’s award last month at Given Memorial Library in Pinehurst.

Barrett and Smith are both Pinehurst natives and remember when the village’s population was counted in the hundreds. Though they contributed to Moore County in very different arenas, both have seen their early work evolve beyond them: Barrett in the lives of countless students and athletes, and Smith with the evolution of the Given Memorial Library.

The Order of the Longleaf Pine was established in 1963 to recognize those who have made significant contributions to North Carolina through their outstanding service records and remarkable achievements.

Induction probably shouldn’t have come as a surprise to Barrett after a 50-year career spanning classrooms, boardrooms and athletic fields.

Barrett was among the seventh generation in his family to grow up in Pinehurst, and his high school and college years were molded by basketball.

Fittingly the first game he ever refereed in 1969 — the same year he graduated from what was then Pembroke State University — was a varsity basketball match at Red Springs High School. Barrett went on to earn master’s and doctorate degrees in education from UNC-Charlotte and Campbell University.

He remained with Moore County Schools and coached at Pinecrest and Southern Pines Middle School throughout his career. Barrett served on the Moore County Board of Education from 2001-2005 after retiring as principal of Cameron Middle.

“I just enjoyed what I did, I enjoyed the kids, I enjoy living here, I enjoy playing golf. I had some opportunities to leave the county and pursue some other things, but it wasn’t for me.”

But Barrett said that his proudest accomplishment, along with reaching 50 years officiating high school sports including multiple state championship events, is chairing the search committee that hired Robin Cummings as chancellor at UNC-Pembroke.

Barrett has served on the Board of Trustees at his alma mater since 2012.

In 2015, the N.C. High School Athletic Association awarded him its Golden Whistle Merit Award to recognize his lifetime of devotion to officiating high school athletics in North Carolina.

When Nancy Smith moved back to Pinehurst for good in the early 1980s, it was to the Magnolia Road home where she grew up. She still lives there today.

“Growing up it was a small town, maybe 1,000 people. I’m not even sure there were that many. It was so small we knew everybody’s pets,” Smith said.

“I’ve tried to give back because I felt like the village had always given a lot to my family and it was something my parents would want me to do.”

Though she had always had an interest in historic houses thanks to her mother’s real estate business, Smith surmises that she was initially put forward for membership and Pinehurst’s planning and zoning board or historic preservation commission — plus the board of Moore Regional Hospital — as “the token native.”

Smith said that her most personal achievements came as part of the group, along with Carolyn Register and Betty Hurst, who stepped up to fundraise for Given Memorial LIbrary in the 1980s and 1990s.

“We were going through the endowment hand over fist. We were going to be broke if we didn’t do something. We were working toward a bookstore, hoping to get enough money,” Smith recalled

“That was probably my proudest accomplishment, only because when I was growing up here there was no library. There was one room in what I called the general office and there weren’t any kids’ books. The lady tried to find kids’ books but all they had were donations and most of them were really old.”

Even two or three decades later Smith can still remember the trials and triumphs of organizing everything from medieval dinners and walking tours of town to the 1995 celebration of Pinehurst’s centennial at the Fair Barn. She was named Pinehurst’s outstanding citizen of the year after chairing that event committee.

Smith currently serves as chair of the board at The Village Chapel.

Though she was honored and humbled to receive the Longleaf Pine award, she acknowledges that she didn’t achieve anything alone.

“It takes a lot of people to do something like that. It wasn’t happening in a vacuum and I didn’t do it alone. I just was involved in it.”