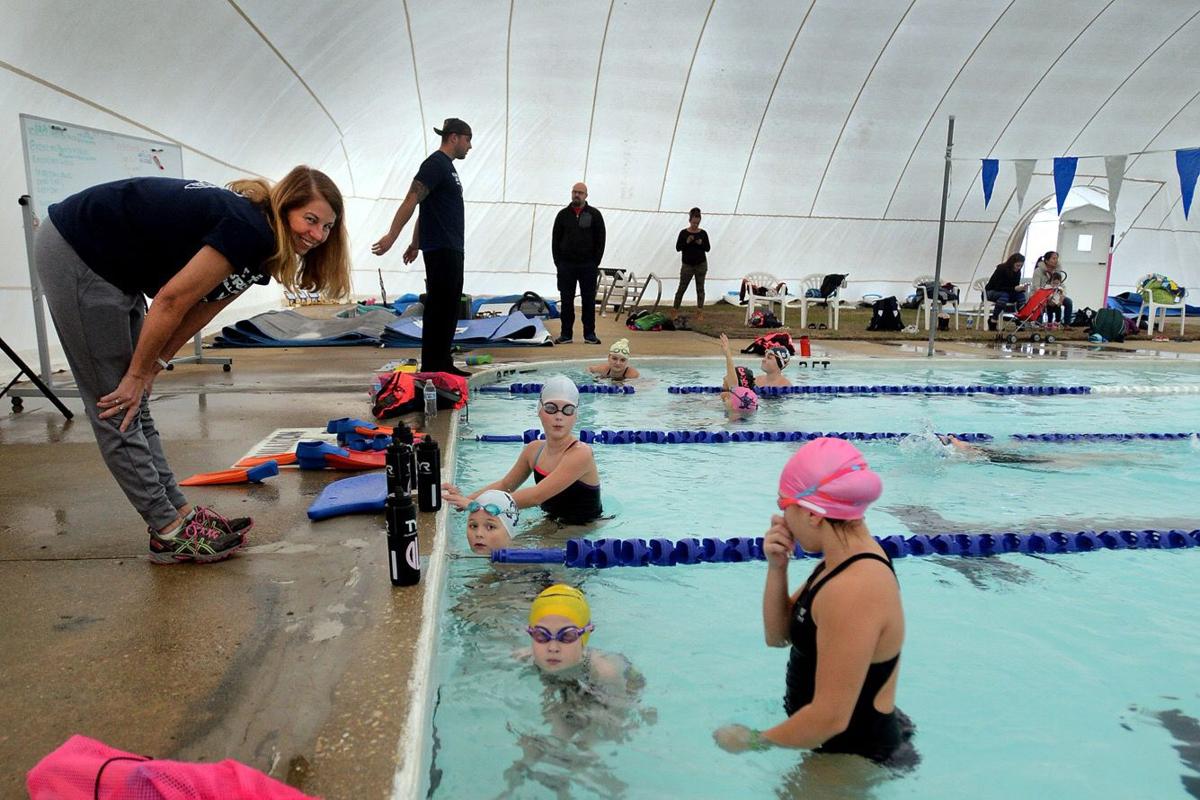 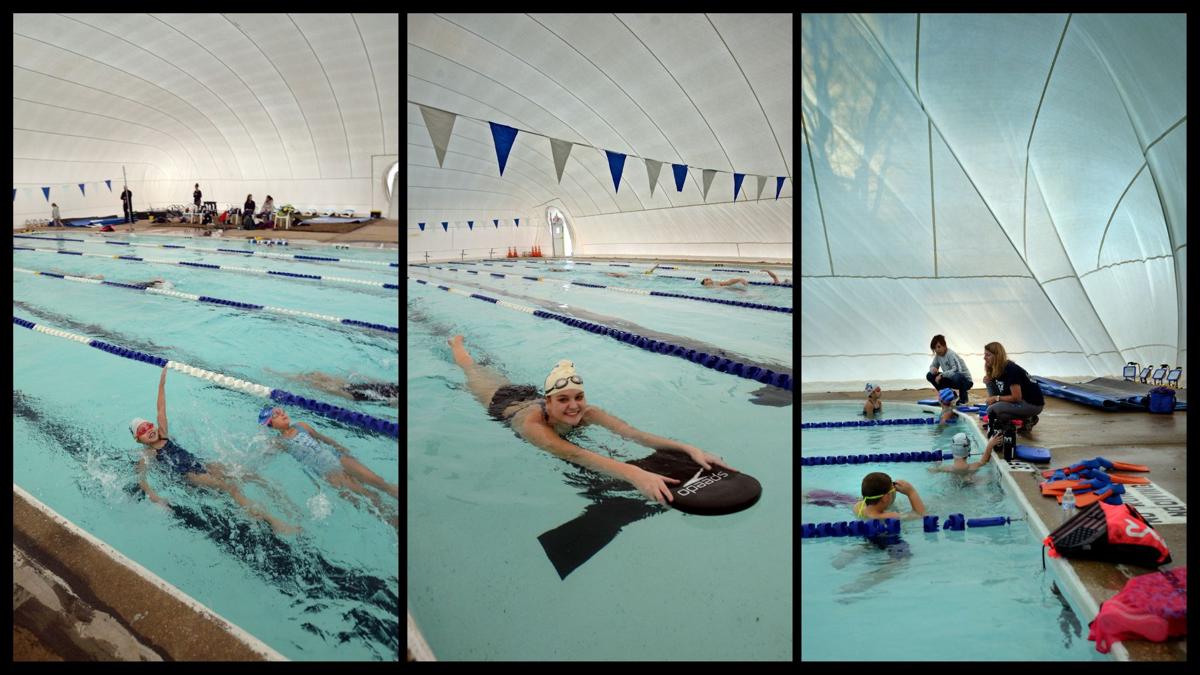 Construction of the pool dome in Southern Pines was funded by the Sandhills Sandsharks. 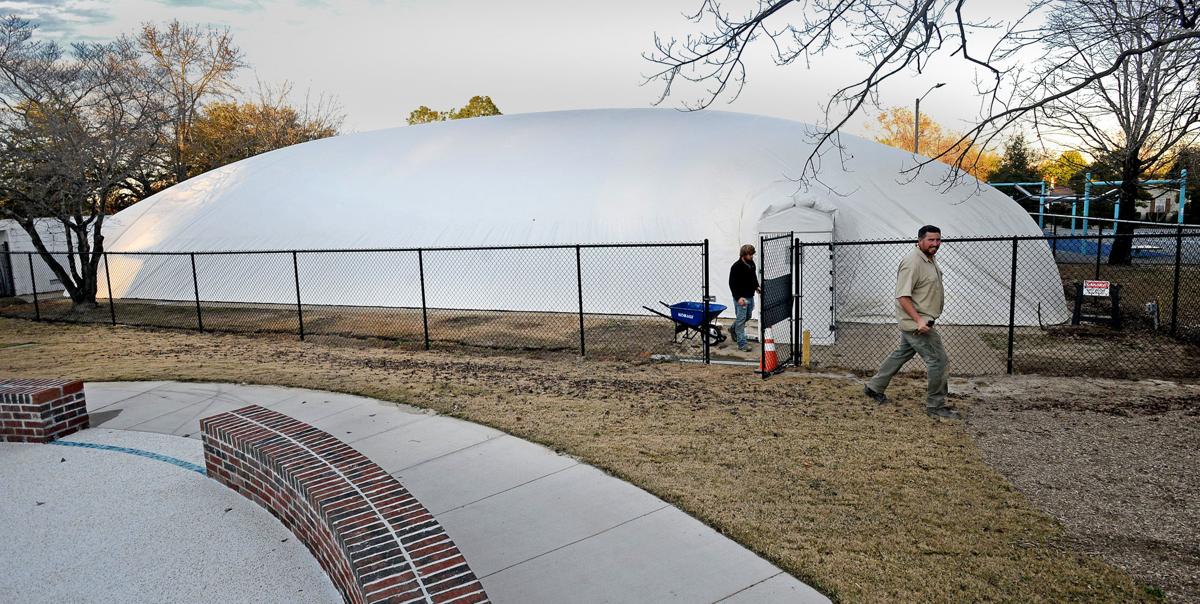 You can’t put a cap on a good time but you can put the fun under cover.

“We are good to go. We passed the final inspection on Monday,” said Sandsharks board member Susanne Cooper. “The kids are excited to get back in their own space.”

Construction of the dome began in early December. Its purchase was funded by the private swim club, and the Sandsharks are responsible for its upkeep. The dome is expected to stay in place through mid-April, before it is placed in storage through the summer.

Cooper said the initial “rising of the bubble” required adapting the structure to the site. It also took a little practice to get the blowers going to inflate the dome. Watersafe lighting fixtures allows for evening use.

“There were a lot of little details that you have to get right anytime you do something for the first time,” she said.

The Sandsharks, a local competitive swim program, will be holding open practices under the dome throughout the holiday season. These practices are open to any children interested in trying out for the team.

“Our kids practice even when it’s cold outside. But we do have heated bathrooms,” Cooper said.

She thanked local contractors Fields Plumbing and Fowler Electrical for doing “far more work that we expected. They have been wonderful with this project.”

Pool Park is located between Henley and Stephens streets, off Morganton Road, behind the National Guard Armory baseball field.

The aging pool — or the Clay Hole as it is still called by many in the neighborhood — has been a point of political contention for years. It is the only municipally owned facility of its kind in southern Moore (the next closest public pool is located in Foxfire Village); however, ongoing maintenance needs and spotty attendance put pressure on town leaders.

In 2017, the pool never opened because the town was unable to recruit enough lifeguards despite multiple outreach efforts. The town worked with school coaches, local organizations including the Boys and Girls Club, and advertising through various media outlets.

The one bright spot to come out of this challenging time was a relationship formed between the town and the Sandhills Sandsharks. This year because of the club’s recruitment help and its lifeguard training classes, in addition to a lifeguard scholarship program offered by Dr. Natalee French and Sandhills Pediatrics to off-set costs for training and classes, and courses offered by FirsHealth of the Carolinas, the town was fill the necessary positions to open the pool during the traditional swim season.

"It's a great team effort between the town and all of these entities to make this happen," said Southern Pines parks director Robert Reeve.

In July, town leaders signed a three-year property agreement with the Sandsharks to keep the town-owned pool in operation year-round.

In exchange for full access to the pool and restrooms during the off-season, the private club is responsible for all water bills, electric bills and pool chemical expenses. Any other large capital items — for example, if a major piece of pool equipment needs repair or replacement — those costs would be shared with the town on a 50/50 basis.

For more information about swim lessons and scheduled practice times by age and ability, email sandsharkcoaches@gmail.com or visit the Sandsharks' website.

A new home, a new coach, and a lot of community interaction have the Sandhills Sandsharks po…

This is a great example of why the private sector does a better job than the government, on most things in fact. Kudos to the leaders of the swim club.