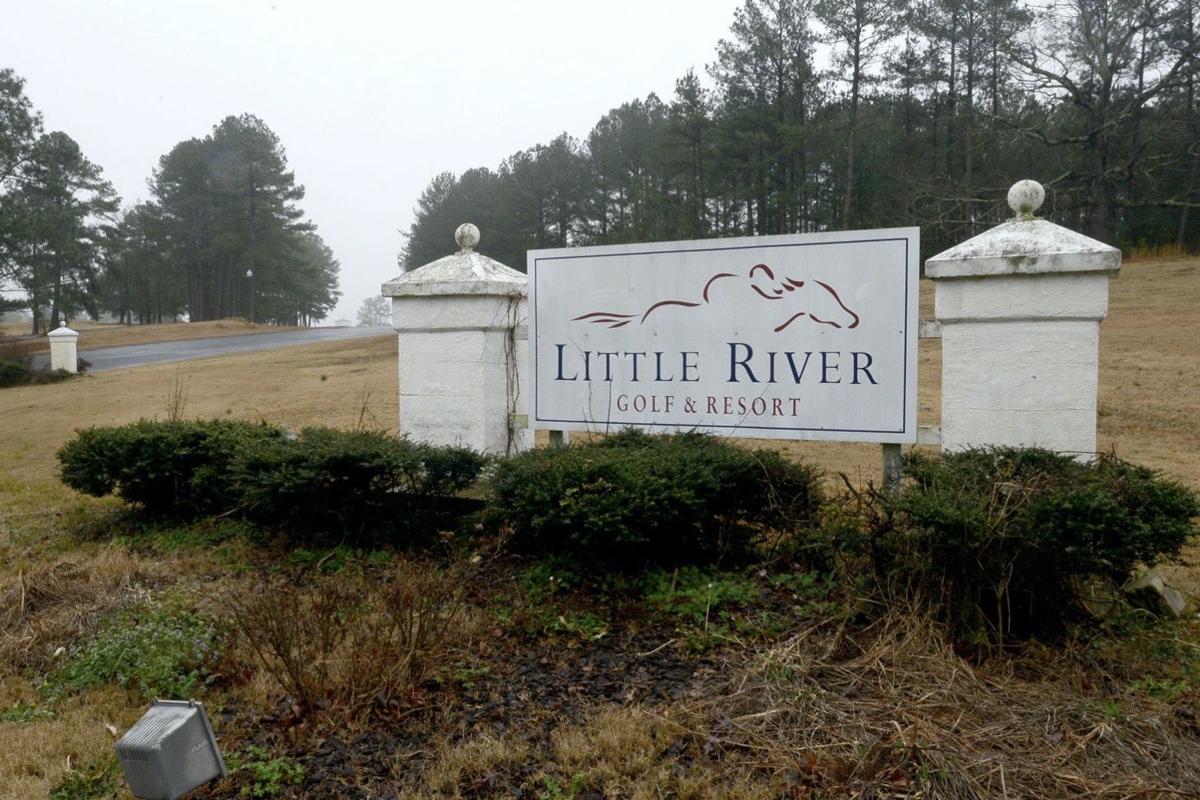 Sign at Little River Golf and Resort in Carthage. 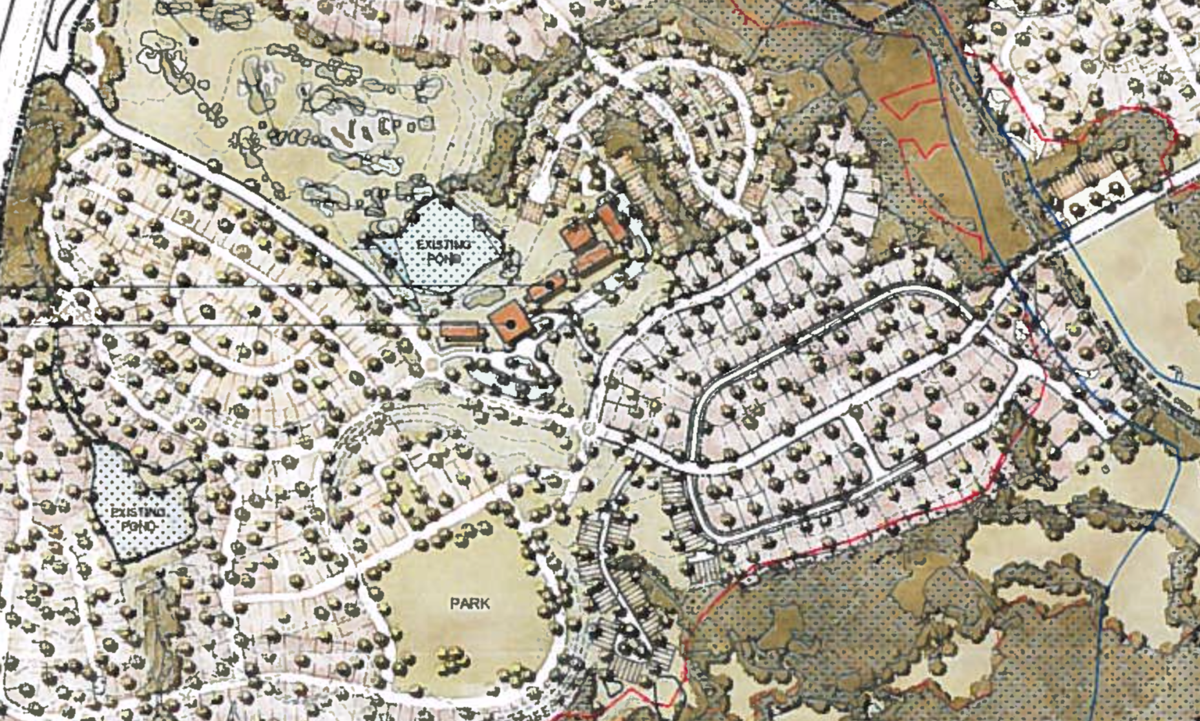 Section of the preliminary schematic for the proposed project at Little River Resort.

After years of false starts, a plan to build a sprawling residential community around a Carthage golf resort is finally coming to fruition.

David Chapman, a California developer, has been in talks to buy Little River Resort from the Texas private equity firm that currently owns the 640-acre property. He submitted a preliminary application in November to build a subdivision on the land, which is located off U.S. 15-501.

“The buildout is going to generate about 2,500 people, and that’s going to be the same size as the existing population of Carthage,” he said. “This thing is probably one of the biggest projects to come across Moore County, period.”

Robinson met Wednesday with Chapman’s attorney to discuss a potential timeline for the project, which is expected to be rolled out in five phases over a span of 10 years. The first phase would include construction of 280 houses, with at least 130 going on lots that already have plats from an earlier effort to develop the land.

A preliminary schematic created by Koontz-Jones Design of Southern Pines shows a mix of townhomes, multi-family dwellings and single-family residences, along with a proposed hotel and short course near the northwest boundary of the property.

Robinson said studies are being conducted to determine how the project might affect traffic and local wildlife. The town, he said, will need to expand its sewer infrastructure along U.S. 15-501 to accommodate the anticipated influx of residents.

Much of the sewer work is expected to be covered with $6.8 million from the U.S. Department of Agriculture. An undetermined amount of that will be awarded to the town as grant funding. The rest will be a loan, which Robinson said could be repaid using system development fees collected from the builder.

In addition to the sewer expansion, Carthage will need a $1.7 million water tank to increase its current service capacity. The developer, Robinson said, must agree to pay at least $1 million to “offset the cost of putting that tank in.”

Chapman is also being asked to set aside money to pay for any services rendered by the town’s attorneys, planners and engineers.

“We’re incurring quite a bit of cost on this, and that shouldn’t really come out of the town’s coffers,” Robinson said, adding that the requested money would be placed in a fund that can be accessed as needed by the town. “Anything at the end of the day that we don’t spend will go back to the developer.”

The developer appears amenable to the request, according to Robinson. Writing in an email on Thursday, Chapman said he is “not yet in a position to go on record about anything as it relates to Little River as we are still attempting to finalize the acquisition of the property.”

Little River Resort was once home to an equestrian training facility with polo grounds and a harness racing track. Carthage bought the land and hired acclaimed golf course architect Dan Maples, who was born near the resort’s namesake river, to design the 18-hole course that would become the property’s centerpiece.

After buying the resort from the town, a private developer built several condominiums along the fairways. The developer later sold the resort to a company called Little River Partners, which announced an ambitious plan to flesh out the property with residential neighborhoods and a shopping center.

The project never moved forward, and Little River Partners sold the resort in 2007 to Oceanico Group, a company whose portfolio at the time consisted primarily of golf courses in Portugal.Records from the Moore County Register of Deeds show that the National Asset Management Agency of Ireland assumed ownership of the property in 2015 after taking over loans that Anglo Irish Bank had made to Oceanico Group, which floundered during the global recession.

ECapital Loan Fund, a private equity firm based in Fort Worth, Texas, bought the resort for $6.5 million during a public auction in April at the Moore County Courthouse. The deal included the golf course, which has been closed since a pump station failed in 2018, causing an estimated $1 million in damage to the greens.

Robinson said Chapman hopes to change the Maples-designed course to “a par-three course, similar to what The Cradle (of Pinehurst) is.”

But before that can happen, Chapman must submit a revised preliminary application stating he has permission to work on the property, which is still deeded to ECapital Loan Fund. An application for a conditional-use permit must also be presented to the Carthage Board of Commissioners for approval.

“Hopefully we can fast-track this and have the planning board and the town council meet together to review (the plan) so they can start working on the first phase by April,” Robinson said. “That’s aggressive, but that’s sort of the timeline we’re talking about.”

According to Robinson, the developer already has “equity partners lined up” and is working with “one of the largest homebuilders in North America.” Robinson said he was not at liberty to share the name of the builder.

“This project has been in the works for 10 to 15 years,” he said. “And it finally looks like it’s actually going to happen.”

Where are all the children going to go to school?

My questions are based on simple logic. Houses cost money, which comes from income or savings or loans. Loans though are backed by income and one’s other collateral. A young military family has only a modest government paycheck. They also have a tendency to move frequently. Thanks to President Trump the days of our enemies are numbered and with it the need for a large military and its massive cost to taxpayers. Retirees do not have the pensions as in years past. They also do not play golf as in years past. There is little growth in jobs in our area beyond retail, which does not pay much. This area is too far for commuters to the Triangle, the Triad or Charlotte. The question then remains: where are the jobs that would sustain a development like this one, more typical of the Triangle where jobs in industry abound? If the developers can make it work they should do it. But if this is contingent on massive taxpayer-funded improvements to water, sewer, roads and government schools, those of us who will be forced to pay this should be asking these questions. Alternatively the developer might want to look at Chatham Park near Pittsboro, which SAS Institute owner and billionaire Jim Goodnight is funding. It includes business and industry parks amid residential areas and includes a K-12 Thales Academy, low-cost, world class independent schools that cost taxpayers nothing.

+ Congress will agree to reduce "it's massive cost to taxpayers" (with another unfunded tax cut thereby making even worse the national debt).

Perhaps decent internet will be brought to the area.

Are they going to tear down any of the existing structures, like the condos?

Where will the future residents work? Where are the good-paying, non-government jobs that will be needed to sustain such a neighborhood? The boom years of retirees with real pensions is long over. You can not build an economy on service jobs and government paychecks. Why not take half the land and build an industrial park, privately financed of course. See what is being done in Chatham Park near Pittsboro for example.

Answer Kent: no demand for an "industrial park". Always easy to tell other people how to make money and spend their money. So why isn't Kent doing what he thinks should be his perfect answers for everything?

This time I share Kent's thought that an industrial park would be beneficial for Moore County. Is the Little River site the right place,probably not.The County will need to create the demand and funding Partner's in Progress in the amount of only $105,000 per year apparently isn't going to get the job done. At least it hasn't yet. Lee County funds their "partner" to the tune of more than $350,000 per year and their success has been demonstrated.

As one of the leading businessmen in the Sandhills, I can say with certainty that the “Partners for Progress” is the major reason for lack of diverse economic growth in Moore Sandhills. If all you want for economic growth is the golf industry, and only want growth in the Southern part of the county, then put the former president of Pinehurst Resorts in charge of your economic development commisssin (like Moore County has done) and that is what you will get; golf to the exclusion of everything else.

Dan, Kent is doing what he thinks should be his perfect answers. He makes large fans for a living. If, or when, burlesque and fan dancing make a come back, he'll be rolling in dough. Not money. Actual dough, he loves rolling in it, I don't know why. Maybe it's a rite of passage into neo-totalitarian radical libertarian secret society meetings?

As I think I've mentioned before, County officials have stated that residential growth returns only $.78 /$1.00 vs.the services required to support that growth.Balancing commercial and industrial growth is required if tax rates are to continue at current levels. Right now, per a recent North Carolina Association of County Commissioners report,Moore County's property tax rate of $.51 / $100 of assessed value is 11th lowest in the state.

Cryotherapy of The Pines