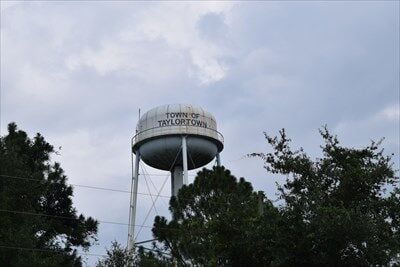 The town is currently accepting bids to construct a multimillion-dollar project to remedy a water system that has long frustrated local residents. 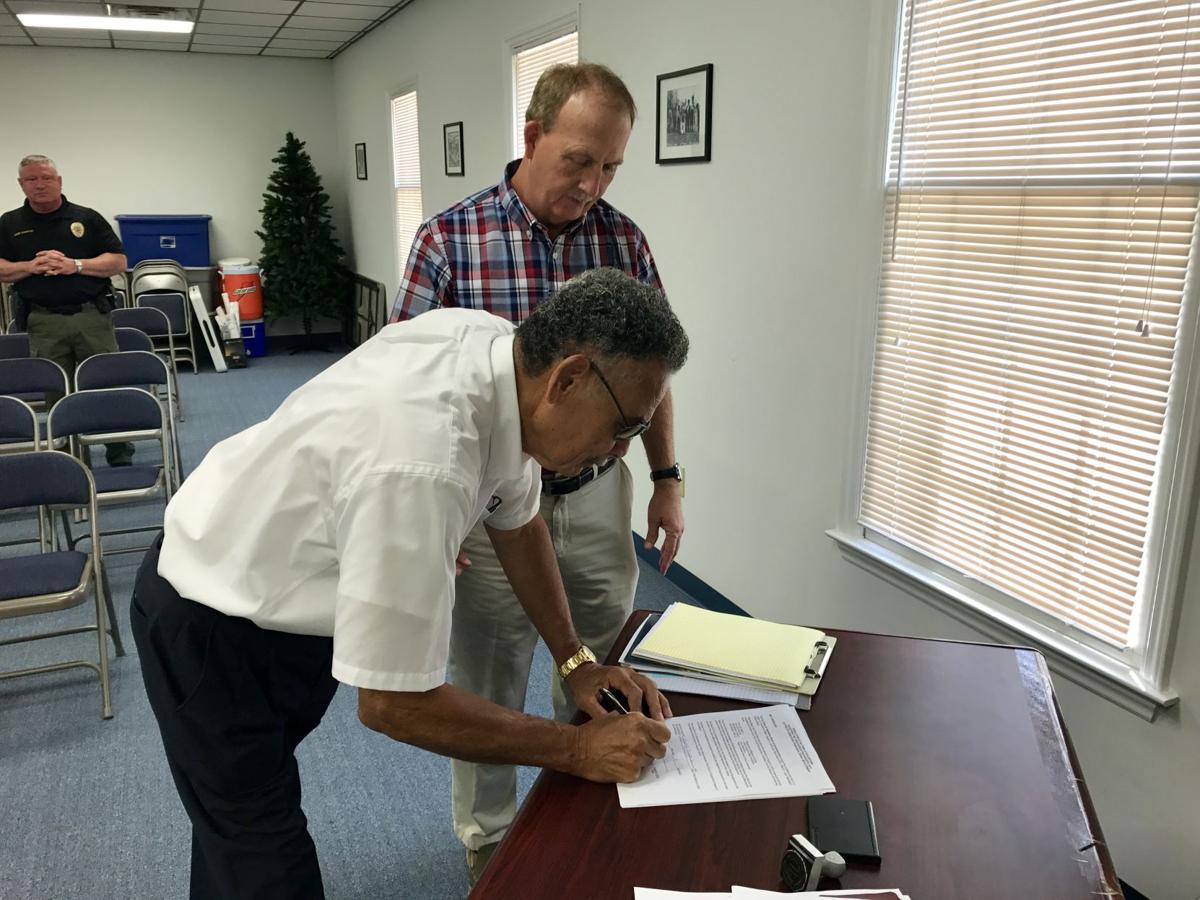 Taylortown Mayor Ulysses S. Barrett Jr, front signs documents for the water grant while Steve Smith, with the USDA-Rural Development office in Lumberton, looks on. The grant, coupled with a 40-year loan, will allow the small town to replace its aged water and sewer system. 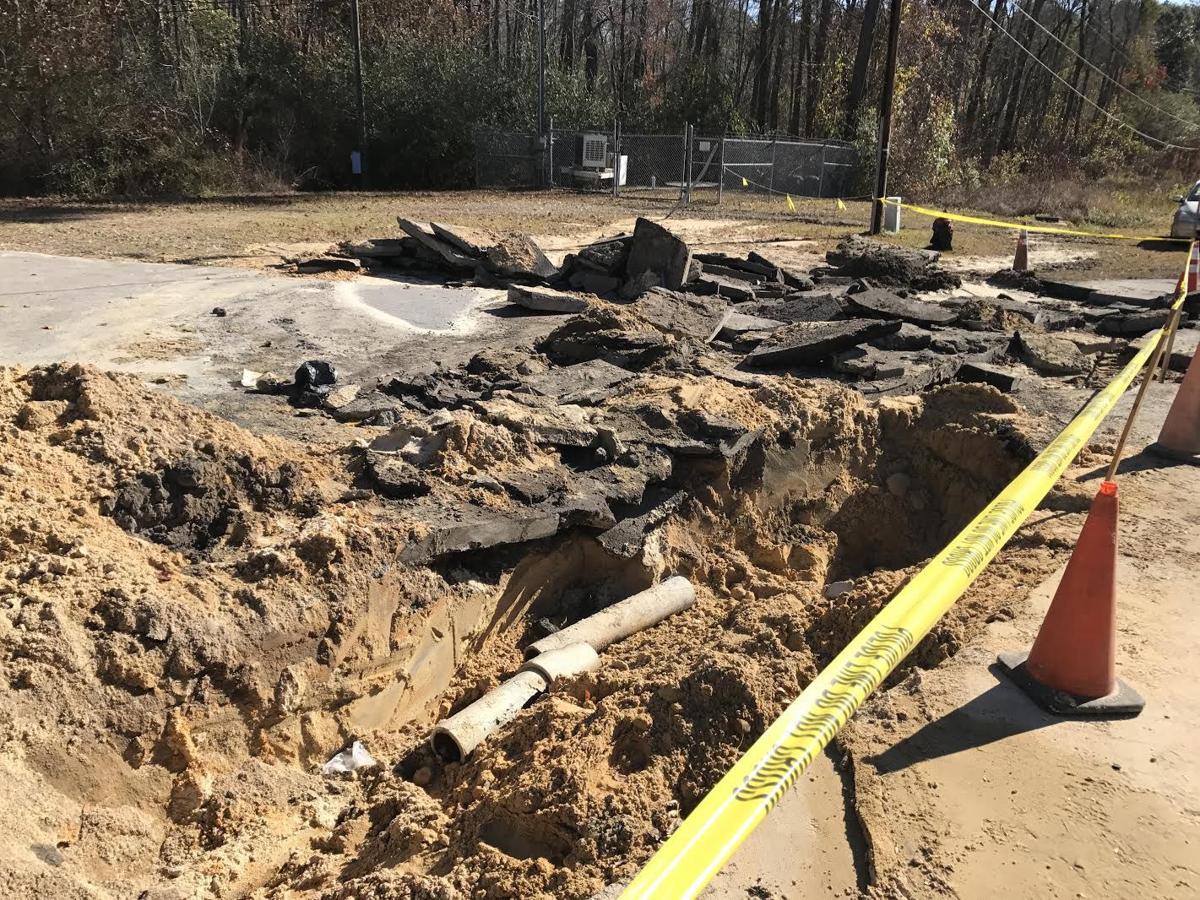 Water line breaks that stop flow or lower pressure are common for residents in Taylortown and the subdivision of Pinesage. 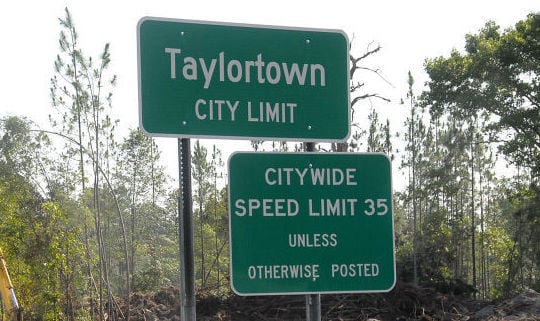 The town's water system is more than 50 years old and was put in 20 years before its incorporation in 1987.

The first successful infrastructure project for the town of Taylortown is getting closer to breaking ground to replace its problem-ridden water system.

The town is currently accepting bids to construct a multimillion-dollar project to remedy a water system that has long frustrated local residents.

Mayor James Thompson said the projects of replacing the water lines in town, as well as rehabilitating the sewer system, will alleviate years of problems that have plagued the town with low water pressure.

“Water is a precious commodity so when the water goes off, nobody is really happy at that point. That’s the most frustrating thing about it,” Thompson said.

“The main thing is to definitely enhance the water quality of the town and for any future projects we may have, and if there are more homes built in the town, we will have adequate water pressure and quality water above all.”

The town advertised bids for the project in The Pilot on Sunday, announcing it will hold a pre-bid conference at Town Hall on Oct. 13 at 10 a.m. Bids will be open and read on Oct. 27 at 2 p.m.

Three contracts were advertised for bids.

One contract will replace nearly 20,000 linear feet of water mains, according to the ad. A second contract will rehabilitate two wastewater pump stations and put in electrical control components for the stations. That contract would also include the installation of a 50-kilowatt standby generator at the pump station located on Lincoln Avenue.

An ad for the third contract lists the “replacement of 335 water meters with new AMR (drive by) water meters.”

While time is of the essence, a time frame for completion of the project will be set once the bids are accepted, Thompson said.

“We are hoping everything will go smoothly with it. There is no definite time to give that the project will be complete,” he said. “This is a timely process.”

Two years ago, the town received $3.6 million in federal financing for the project from the U.S. Department of Agriculture-Rural Development (USDA-RD), that included $2.6 million of the total in grant money.

The other $963,000 of the offer was a low-interest loan that will be repaid over 40 years. The interest rate of the loan is 2.375 percent and will never increase, but has the option to decrease over the life of the loan.

To offset those costs to help finance the loan, Taylortown has raised its water and sewer rates slightly, according to Thompson.

“Because this wasn’t a 100 percent grant, we had to increase our water and sewer rates,” Thompson said. “The upside to it is we haven’t increased our rates in recent years, in at least the last 15 years, so we have some of the lowest rates in the whole county.”

The updated water project, once completed, will take a yearly expenditure off the town’s hands when it comes to repair work for busted water lines and water pressure shortages.

“We just got a bill from our contractor that’s been very helpful for us during this and it was for $20,000 in water repair bills in the past year,” Thompson said. “This will greatly improve and help revenue rates for our water and sewer fund. It gets very costly to have a contractor come out and bring manpower, and then we have to pretty much shut the whole town off.”

Thompson said shutoff valves will be used in the new system to help prevent widespread outages in the town when a water issue arises. The new system will be put in adjacent to the current water lines that are in the ground now.

The more than 50-year-old water system was put in two decades before the town was incorporated in 1987. The town's population of less than 1,000 residents in more than 300 homes, and many of the town’s businesses, are on the water system.