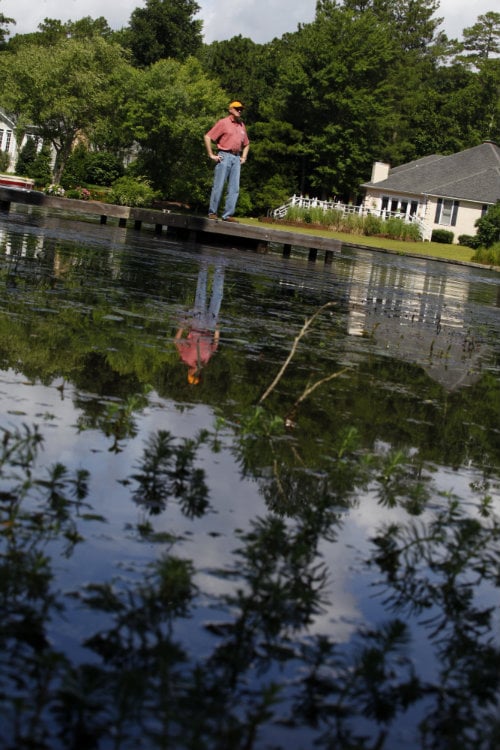 Lake Pinehurst resident Tom Reedy says that though a lot of progress has been made in eliminating hydrilla weeds (shown below) from the water, there is still more work to be done in certain areas to prevent the weeds from overtaking the ecosystem again. 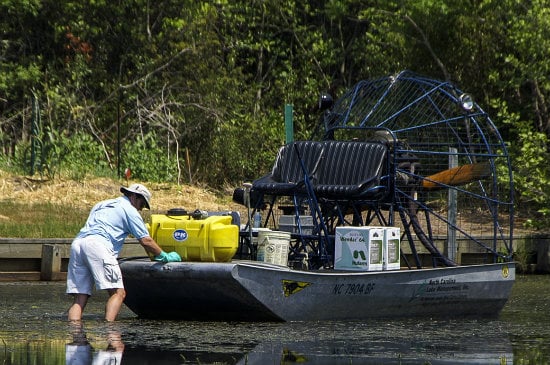 Tom Riel, of N.C. Lake Management Inc., pushes his airboat out of a shallow cove after it got stuck in hydrilla as he works to eradicate the weeds from the lake.

Lake Pinehurst resident Tom Reedy says that though a lot of progress has been made in eliminating hydrilla weeds (shown below) from the water, there is still more work to be done in certain areas to prevent the weeds from overtaking the ecosystem again.

Tom Riel, of N.C. Lake Management Inc., pushes his airboat out of a shallow cove after it got stuck in hydrilla as he works to eradicate the weeds from the lake.

Efforts to eradicate a fast-spreading aquatic weed that threatened to choke the life out of Lake Pinehurst have been so successful that some may not think there is still a threat.

Hydrilla was confirmed in the scenic lake in the fall of 2008 by an official with the N.C. Division of Water Resources. Left unchecked, the noxious weed could have destroyed the lake’s entire ecosystem, said Tom Reedy, president of the Lake Pinehurst Association.

The state developed a plan to combat the problem. The association hired a contractor to implement the plan, which included two main components: adding 2,000 sterile, grass-eating carp to consume the weed, and spraying the entire perimeter of the shoreline with an herbicide as needed. Since it is a private lake, the state cannot providing funding, Reedy said.

“We have hydrilla under control, but we have a long way to go to completely eradicate it,” he said. “Eradication is our long-term objective if we are to protect and preserve the health and beauty of Lake Pinehurst.”

Very little hydrilla is visible now, which may have led some property owners around the lake to think it is no longer a problem. Reedy said that is reflected in the increasing number of property owners who no longer contribute toward funding the program, which he called “very concerning.” He said the number of non-participants rose from six to 20 last year, and it could be even more this year.

“Some said they don’t see it as a problem anymore,” Reedy said. “They think we have won the battle. We can’t be complacent. This is still a credible threat.”

Some of the properties that no longer participate are homes that are for sale.

“The sad thing is, these are the people who should be most concerned because the health of the lake affects their property value,” Reedy said.

Since starting the program in 2009, the association and Pinehurst Resort have spent about $130,000 on hydrilla control and eradication, according to information supplied by Reedy.

The cost has been shared by the resort — which owns the lake and pays half of the costs — and the owners of 145 individual properties around the lake and six different homeowner associations — Brae Burn Village, Lakeview Condos, Lake Pointe Cottages, Lake Pinehurst Villas, Lake Pinehurst Association and Westlake Point — that pay the other half.

Reedy said the partnership with the resort and having 100 percent participation by lakefront properties has been the key to the success of the program.

“This is a common backyard for us,” Reedy said. “We all had to get behind it to deal with this death threat to the lake. The resort has been a good partner with us.”

Bob Farren, director of golf course maintenance and grounds for the resort, said the lake is an important asset for the resort and the community. It provides recreational opportunities for residents and country club members and provides water for irrigating the golf courses.

“We want it to be a pretty and pristine lake for everyone,” Farren said. “It comes down to being good stewards of the environment. It is one of our largest assets, but it is also an asset for the community.

“I don’t think we can ever let our guard down if we want to protect it.”

The annual cost of the program now is about $20,000, Reedy said. For individual property owners, it amounts to $50 a year.

Reedy said that if the association had not immediately implemented an aquatic weed management program, “we could be facing costs in excess of $1 million to reclaim Lake Pinehurst from the hydrilla infestation.” He pointed out that Lake Waccamaw could be spending $4 million to combat hydrilla.

Farren said that when hydrilla was discovered in Lake Pinehurst, its spread was becoming more accelerated. “Once it gets beyond a certain point, it becomes extremely challenging and much more costly,” he said.

The concern now lies at the bottom of the 200-acre lake, Reedy said. Tubers on the roots of the weed can lie dormant in the mud for up to seven years. He added that now is not the time to “throttle back” on eradication efforts.

When the state first inspected the lake in the fall of 2008, it determined that more than 100 acres of the 200-acre lake were already infested with hydrilla. Reedy said the hydrilla rating was deemed to be “severe.”

“In some areas of the lake, residents were unable to get their boats away from their docks,” he said.

Reedy said hydrilla chokes out the native vegetation used for fish habitat and also reduces oxygen levels in the lake, resulting in many fish kills. He said the contractor has taken “great care” not to spray any beneficial aquatic vegetation that can be used as fish habitat unless it was choked with hydrilla.

Information provided by the state says small amounts of hydrilla “may temporarily have a desirable effect on sport fishing by providing food and habitat for forage fishes and cover for the large predators such as bass, which often lurk near the edges of the mats. The mats effectively concentrate game fish in an easily accessible area. Hence, many fishermen believe that hydrilla improves the fishing in a lake.

Reedy said no one knows for sure how hydrilla got into Lake Pinehurst. He said that according to the state, one of the common ways it spreads from lake to lake is via boat propellers.

Reedy said the lake is inspected twice a month, that the number of grass-eating carp put in the lake has been reduced to about 200 a year, and that spot herbicide spraying is done when needed.

“This is the most cost-effective approach to the control and eradication of hydrilla,” he said. “We are executing this plan, and it is working.

“This will be an ongoing program. When we first waged this war on hydrilla, we hoped to eradicate it in seven to eight years. I don’t think the state has ever determined that a lake is 100 percent weed-free.”

Reedy said the state will conduct a more thorough check in two years to assess the lake, and that it is vital for everyone to continue to participate in paying for the eradication efforts.

“We all have a responsibility to protect and preserve the beauty and health of the lake,” he said. “It will be the death knell for the lake when people begin to take the lake for granted.”