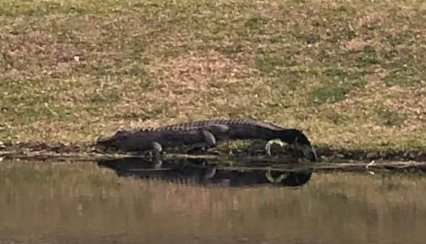 This photograph of an alligator allegedly spotted in the Seven Lakes community was shared on a community Facebook page on Tuesday.

American alligator populations are common in some coastal areas of the state. This natural distribution map courtesy of N.C. Wildlife

Residents in the Seven Lakes community have seen their fair share of interesting wildlife over the years, including a black bear rambling through the area last fall.

But Jenny Conover, who lives on Big Juniper Lake in the Seven Lakes North neighborhood, couldn’t believe her eyes on Monday.

“I happened to look out the window and saw something floating out in the middle of the lake,” she said.

Her husband pulled out a pair of binoculars and they decided it looked a lot like an alligator.

“It was moving and gliding along in the water. We watched it for 15 minutes until we couldn’t see it anymore,” Conover said. “But we kind of dismissed it. I was thinking maybe we were crazy.”

The next day another neighbor, who prefers to remain anonymous, shared a photograph to a community Facebook page of the alleged alligator he claims he saw on the same lake.

“A lot of people think it is a hoax. I know it is not a hoax,” Conover said.

Lt. Mark Dutton of the N.C. Wildlife Resources Commission, and a longtime resident of Foxfire, said the incident had been reported to the state agency.

“An alligator in Seven Lakes is not out of the question, just out of place,” he said.

Dutton speculated a few scenarios including the possibility it was a decoy used to scare away geese, or an illegal pet that had escaped or been released when it grew too large for its enclosure, or that it could be a natural occurrence.

“They could survive. We have alligators that have established habitats within 50 miles (of Moore County),” he said. “They can travel up a creek and will migrate if they are looking for a new habitat if they’ve been pushed out of where they came from.”

Alligators are a protected species in North Carolina, with their primary habitats in the southeastern portion of the state. They are known to inhabit freshwater swamps, marshes, ponds, lakes and the backwaters of large rivers. Adult alligators are usually solitary, but often congregate together, especially in the breeding season, according to information shared by N.C. Wildlife.

“My best guess would be this is a released pet,” Dutton said.

“My interest is just trying to get confirmation what we do or don’t have. We know that we do have a beaver in that lake,” said Rod Ansley, board president of Seven Lakes Landowners Association. “But no doubt, the picture posted online was an alligator, not a beaver.”

He confirmed community staff have been in direct contact with state wildlife officials to discuss the issue. They viewed the photograph provided by the homeowner and estimated, if the sighting is valid, that the size of alligator would indicate it was approximately 20 years old.

“The only way an alligator that size could get there is if somebody put it there,” Ansley said.

For the time being, he said there is a greater awareness and communication in the community.

“We only are aware of the two sightings, so we will keep an eye out,” he said, noting he will also provide a briefing on the incidents during the regularly scheduled community business meeting on Thursday.

Conover, who works from home with her desk overlooking the lake, said she’ll be keeping a close eye on the water.

“I have two little dogs, so I am worried. I think it’s important for people to be aware of this,” she said.

For any enviros who think humans drive away wildlife......