Gov. Roy Cooper on Tuesday signed an executive order easing some of the restrictions enacted to curtail the spread of the coronavirus in North Carolina.

The order marks the first phase of what Cooper called a “careful and deliberate” plan to lift constraints on travel, business operations and mass gatherings in the state.

“I want to be clear: North Carolina’s stay-at-home order will remain in place,” Cooper said during a news conference. “But it will be modified to allow more reasons for people to leave home and to allow for more commercial activity.”

Cooper said the revised order, which takes effect at 5 p.m. on Friday, raises the customer occupancy for retailers to 50 percent of the store’s fire capacity. The order also removes descriptions of essential and nonessential businesses, Cooper said, and gives residents permission to “visit any business that is open.”

The modified mandate does not allow the reopening of businesses that were specifically ordered to close in response to the pandemic. Movie theaters, bars, bowling alleys, barbershops, nail salons and tattoo parlors, among other establishments, will remain shuttered until at least May 22, which is when the order is set to expire. Dining at restaurants is still prohibited.

“These are businesses where social distancing is difficult,” Cooper said. “But they will have the opportunity to open and do more in phase two when we get there.”

Cooper said residents will be able to “socialize with friends, as long as they’re outdoors and they’re socially distant.” Gatherings remain limited to 10 people, but protests and worship services with larger crowds are allowed outdoors on the condition that participants stand at least 6 feet apart.

“There’s still significant concern about gatherings of more than 10 people indoors, particularly where people are standing or sitting near each other for more than 10 minutes,” Cooper said. “The chances for spreading the virus are significantly greater in these circumstances.”

The order allows childcare centers to “reenroll children whose parents are back at work or are looking for work,” Cooper said, but such facilities must adhere to “strict cleaning requirements.”

Click the image below to read the full executive order: 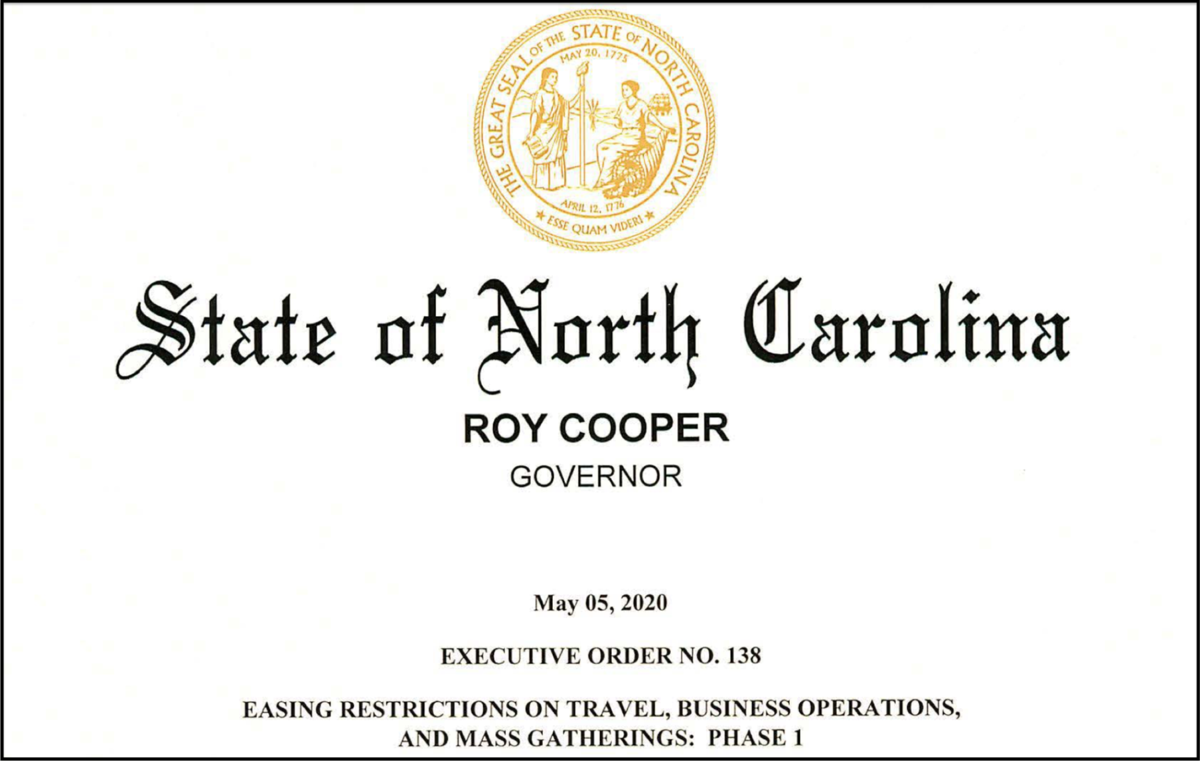 I’m not surprised at all to see State Senate candidate Helen Probst Mills in the photograph with Governor Cooper. Time and time again she displays her concern for and loyalty to the citizens of Moore County. Thank you, Helen!

"Trust adults to do what is right." On the one day a week I go out I observe more than 50% of the adults not "doing what is right." I do wish you would move to South Carolina and leave us alone.

South Carolina isn't far enough, he could return. I'd suggest we put him the next flight to South Africa, circa 1960, when apartheid was in full-force. That's the kind of society that would fit Kent to a tee.

This is ridiculous. Restaurants are open in South Carolina, little more than 30 minutes from downtown Southern Pines. Our golf courses have remained open to out of town visitors. Our highways are open and connect our region to the entire nation. The stay-at-home order can not be enforced and makes our state look like a giant kindergarten. Just say no to the nanny state and trust adults to do what is right. If you choose to be scared and cower at home, go for it.

Over 1,300,000 cases of COVID 19 and over 70,000 deaths so far with some estimates that deaths will total 3,000 per day,or more, by June. Enjoy you life Kent. Some of us choose not to risk ours unnecessarily.That doesn't make us cowards, That makes us smart. John Misiaszek

Are you ever happy with anything? Life is good. Enjoy.

Kent is a know it all, self satisfied, useless waste of oxygen selling snake oil.