When Stephen Fraser’s wife couldn’t find a yellow polka-dot pattern for a pair of drapes, she thought, “There has to be a website for this.” Fraser says the idea inspired him and Gart Davis, who both had experience in the digital world — Davis as co-founder and Fraser as director of communications and marketing of Morrisville-based online self-publisher Lulu — to start Spoonflower. 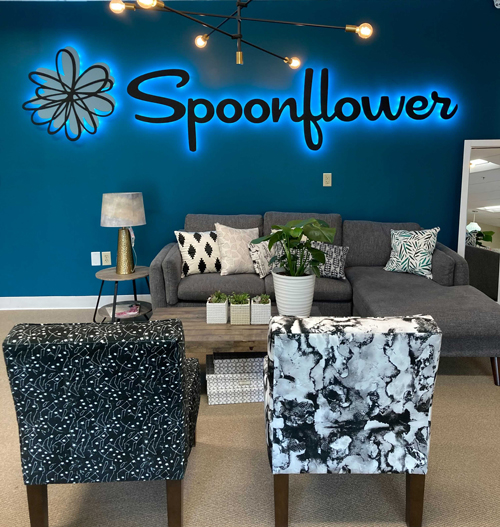 What Davis now refers to as the YouTube of textiles, Spoonflower began as a fabric-on-demand e-commerce business, operating in a 400-square-foot space with two printers. The company has since expanded into the home-decor market and offers more than 1 million designs. It is attracting 30,000 new customers each month. Last year, Spoonflower expanded to a 110,000-square-foot location in Durham, adding 100 employees and two industrial printers. It also has a site in Berlin, Germany, that opened in 2019.

As many people spent more time at home during the pandemic, home-improvement projects and online shopping skyrocketed. Whether it was redecorating with elaborate wallpaper or adorning throw pillows in custom fabric, the newly found interest in sprucing up put Spoonflower on the map.

“We’re not a pandemic blip. We’re a business that was undiscovered and became discovered as a result of more people shopping online,” says Chief Revenue Officer Jessica Lesesky. She views Spoonflower as having the potential to join the ranks of companies valued at $1 billion or more.

In 2020, consumer e-commerce spending totaled $861 billion, marking 44% year-over-year growth. Creative online consumer markets such as Etsy, which focuses on artists and craftmakers, reported an 87% seller increase from 2019 to 2020, with 39.4 million active buyers worldwide. Similarly, Shopify, which enables users to set up an online store, experienced full-year revenue growth of 86%.

Spoonflower saw a 111% increase in its year-over-year sales in the fourth quarter of 2020 and a 137% gain in new customers. Specific financial details were not disclosed.

Lesesky, who joined Spoonflower in the midst of initial lockdowns, met with her team virtually. To keep up with the growth, she established a sales and account management team to work directly with interior designers and buyers.

“I was one of the first people in e-commerce development. I’ve been able to see a lot of different businesses in different verticals and how they scale or stall over time and what are some of the key components of success,” Jones says. “For Spoonflower, I believe so strongly it’s not your typical e-commerce site. It’s artists across the world creating millions of independent designs with a maker community buying fabric or interior designers buying home goods and wallpaper.”

Davis says Spoonflower was the first of its kind in the textile creative consumer economy. At the time, design options were limited, and custom fabrics printed at about $50 to $150 per yard. Makers also had few markets for promoting their work.

“Back in the day, we didn’t really have a lot of the product launch websites that we do now,” Davis says. “We essentially did that.”

It hasn’t always been triple-digit growth, though. The company started as invitation-only with designs outsourced to a printer in Cary. Fraser and his wife put in much of the legwork, hand-cutting the fabric themselves. An increase in orders led to a $40,000 bank loan that provided funding for a printer and a Mebane location. Their big break came in 2015 when the company raised $25 million from investors led by Boston-based North Bridge Growth Equity, which is now named Guidepost Growth Equity.

With the funding, Spoonflower expanded into Europe by adding a Berlin office and ranked on Inc. magazine’s list of fastest-growing U.S. companies in 2015. But a year later, the company cut 31 employees in Durham, or 18% of its staff, citing slowing growth and a need to restructure. Playing to the strength of short-term digital fabric printing, Spoonflower entered other markets including apparel and home decor. Launching home-decor site The Roostery in September 2016, Spoonflower now prepackaged fabrics for home decor. The Roostery has since been absorbed into Spoonflower. Today, Spoonflower’s print-on-demand items include throw pillows, tea towels, duvet covers, sheet sets and more. Amid the pandemic, the company added custom-printed face masks.

Spoonflower has put a strong focus on marketing and community building. The company hosts monthly artist and maker spotlights and weekly design challenges publicized on its Instagram account, which has more than 325,000 followers. To promote creative, handmade products, Spoonflower provides awards of company credit to as many as 20 small businesses annually.

Under Spoonflower’s best-selling wallpaper, a beige background depicts a quaint forest camping scene — until you realize one of the campers is being abducted by an alien spaceship. Other designs include multicolored jellyfish swimming in a navy seascape, bees and lemons, fireflies and even art deco swans. Spoonflower’s unusual designs have been featured on HGTV and in Cooking With Paula Deen. 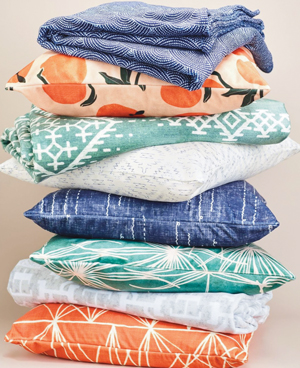 Jones says there would be no Spoonflower without its thousands of artists, who receive a 10% commission on sales. Unlimited creativity paired with a Rolodex of options has led to popularity with both individuals and giant corporations.

“We had someone order a full line of wallpaper,” Jones says. “What happens is we look at large orders, and they get a swatch. In one case, it was wallpaper with cheeseburgers all over it, and they were actually redoing office space for Google.”

Officials say partnerships with hotels, restaurants and breweries will hopefully open doors for more retail and wholesale customers. Other recent partnerships include The Honest Co. and a nationwide product launch at HomeGoods.

For Jones, design is an international language with a love of certain patterns and styles transcending geographical tastes. “You see so many unique designers from all over the world. You’re not limited by location. It’s possible on the platform you’d buy wallpaper, fabric or home decor and the design would come from someone in Europe.”

Davis says North Carolina has been the perfect fit for the business. In a state with a rich textile background, the transformation from analog to digital is only par for the course.

“Little old Spoonflower is the largest on-demand textile printer,” Davis says. “You can look at textiles as the last media to convert. Of course, you expect a table and exercise minimizing failure and maximizing success. Whenever a project is as successful as Spoonflower has been, even your failures are successes to get to the scale of where we’re at. That being said, my expectation is that the transformation of textiles as a medium from analog to digital is only beginning.”