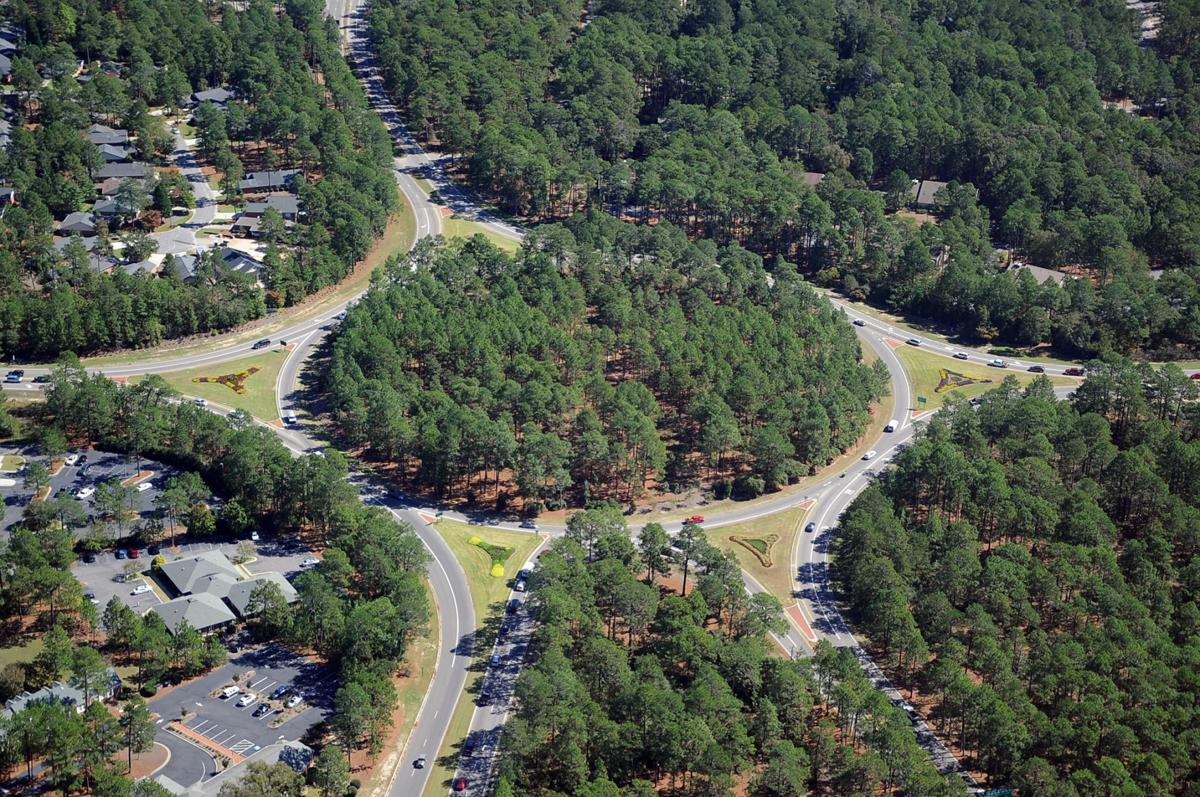 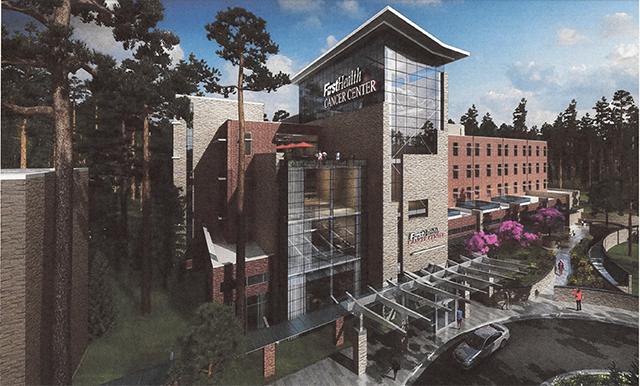 Rendering of the FirstHealth Cancer Center planned for construction on Page Road, across from the Reid Heart Center and Moore Regional Hospital in Pinehurst. 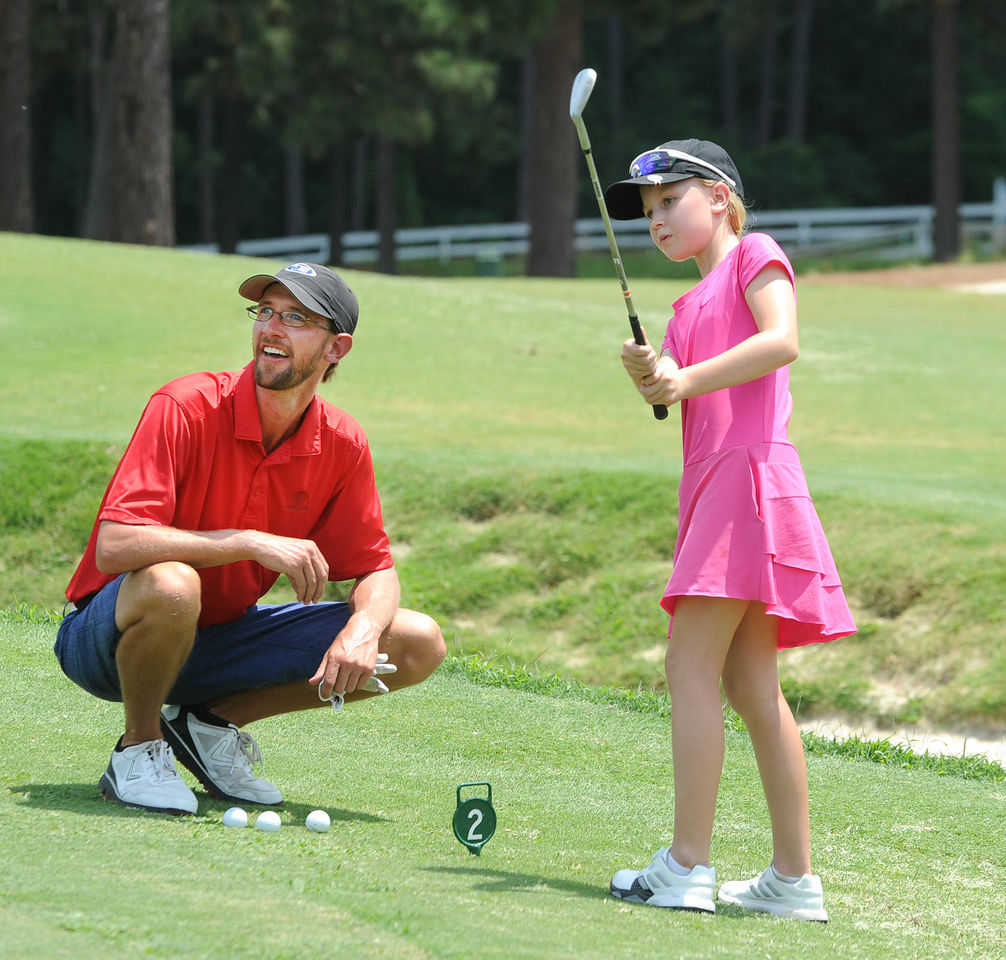 Moore County ranks in the top 10 percent in terms of economic strength for small economies nationally and holds the top spot for “micropolitan” areas in North Carolina for the third consecutive year.

Florida-based consulting firm Policom catalogs the nation’s 384 metropolitans and 542 micropolitans, annually, looking at each area’s long-term tendency to grow consistently in size and quality. A micropolitan area has a population of more than 10,000 but less than 50,000 residents.

Policom’s methodology uses the Regional Economic Information System (REIS), published by the U.S. Department of Commerce Bureau of Economic Analysis (BEA), as the principal data set to create the rankings.

On the national stage, Bozeman, Mont. holds the No. 1 spot for micropolitan statistical areas.

“One of the most difficult things when it comes to economic development is how do you measure it. Is it jobs? Is it the tax base? From my standpoint, the most significant measure of our success is being ranked No. 1 in North Carolina for small economies,” said Pat Corso, executive director of Partners in Progress.

He attributes Moore County’s regional strength to a “hub and spoke” system with people choosing to live, work and play in coordination with surrounding counties.

“We know how many people here are running over to Fayetteville to work, but they chose to live here and bring their purchasing power back home. The same is true for other areas. It is mutually beneficial, cross-pollination,” he said.

Corso offered FirstHealth of the Carolinas as an example of the hub and spoke approach. The flagship medical facility in Moore County serves as the economic anchor, while its smaller hospitals and clinics provide services to a greater 15-county area.

“We didn’t dream up this model: it just happened. But I would argue that you can replicate this model, and you could make it more effective,” he said.

Importantly, the Policom ranking system does not reflect the latest “hotspot” or boom town. Instead the study measures 23 different economic factors over a 20-year period, using formulas that determine how an economy has behaved over an extended period of time. That is, the rankings reflect how an area has behaved but not why.

“Each community has its own economic characteristics, and can grow or decline for different reasons,” said William H. Fruth, president of PolicomFruth, in a prior interview with The Pilot. “The study area is county-based, and the formula is based on commuting trends. We look at where the principal population lives, works and spends their money.”

To make continued progress and bolster the local economy, his advice was simple: The region must diversify its economy.

Historically speaking, a lot of Moore County’s economic success has been circumstantial. Much of the region’s textile industry dried up in the early 2000s; however, tourism and golf have continued to be a key and vibrant economic driver despite the extreme challenges wrought by the pandemic this year. In addition, Moore County’s economy relies heavily on agriculture and agri-business, healthcare, and smaller markets in defense and military contractors, and manufacturing.

Attracting more golf-related businesses is one area of potential economic growth that has generated particular interest.

On Wednesday, the U.S. Kids Golf Foundation announced it is relocating its Norcross, GA-based non-profit foundation to Pinehurst.

In 2015 U.S. Kids Golf purchased Longleaf Country Club and renamed it Longleaf Golf & Family Club in Southern Pines and began to immediately transform the club into a living laboratory for the development of the game of golf. Longleaf became its home base for its academy, foundation and development of a “living laboratory” for golf research and youth player development. The Academy currently serves over 600 players from the area and from throughout the United States.

The golf equipment division of U.S. Kids Golf will continue to be headquartered in Georgia.

Earlier this year, Partners in Progress collaborated with the county’s Convention and Visitors Bureau (CVB) on a new video that highlights Pinehurst’s attractiveness as a business address for potential companies. Billed as an economic development project, the video was presented at the 2020 PGA Merchandise Show in Florida.

Phil Werz, CVB president and CEO said the video’s content relies heavily on Pinehurst — a globally recognized name — but the intent is to showcase the entire area for businesses once they come to visit. On-camera interviews feature leaders in the local golf industry, including Dan Van Horn of U.S. Kids Golf, Tom Pashley of Pinehurst Resort, Kelly Miller of Pine Needles and Mid Pines resorts, and Jamie Ledford of Golf Pride.

Corso said one of the main goals of the recruitment effort is to identify “the right company, the right group, and the right ideas” to relocate to Moore County.

Never mentioned shrinking the Military, can't find enough good men and women to serve as it is. The Military will not decline in numbers, Fort Bragg will not be impacted, and the Military families will continue to thrive here and remain, and continue to be a positive force in their communities. The reason for the troop pullout is because Germany won't pay their bills.

Basing an economy on recreation, entertainment, government paychecks and health care is like living in a house of cards. The panic-demic has shown this with great clarity. We’re pulling troops out of Germany as the threat from Communists no longer exists. Thank you Mr. Trump. Inevitably the head count in the military will decline, affecting also Ft. Bragg. While the media focuses attention on relocation of businesses, far better is to grow an economy from within, best in industry and agriculture, where all true wealth is created. Our area lacks respectable industrial parks like those found in Lee and other NC counties. Our community college puts too much focus on becoming the next UNC liberal arts campus and promoting sports teams. It needs to be directed instead by area industry, not by lifelong bureaucrats and academia. We lack natural gas in most of the county, an important source of energy for many industrial companies, for instance the modern brick and wood product manufacturers around Sanford. To grow from within the County leaders should embrace school choice through universal vouchers of the same amount now given to charter school students. Apprenticeships are by far the best means to enter nearly any career, not an expensive college education with little practical training. Taxes and regulations affecting business should be reduced wherever possible. Stop paying people not to work through welfare and other give-aways. Don’t try to pick between winners and losers but create the right conditions and get out of the way of entrepreneurs who are rewarded for taking risks and long hours by the profits their businesses make.

Kent Misegades The Pilot/Pinehurst Pinocchio, all knowing, all seeing, an opinion about everything based on....his opinion. '...threat of Communists no longer exists...?" Well, Russia is a dictatorship disguised as a "democracy" led by a Putin, who longs for the good old days, and has Trump dancing to his tune. Then again so do Kim Jon-us (North Korea) and Xi Jinping (China), who have played Trump like a chump.