You are the owner of this article.
Edit Article Add New Article
You have permission to edit this article.
Edit
Home
Subscribe!
News
Pets
Opinion
Obituaries
e-Edition
Classifieds
Jobs
TicketMeSandhills
The Country Bookshop
Newsletters
Contests
1 of 5 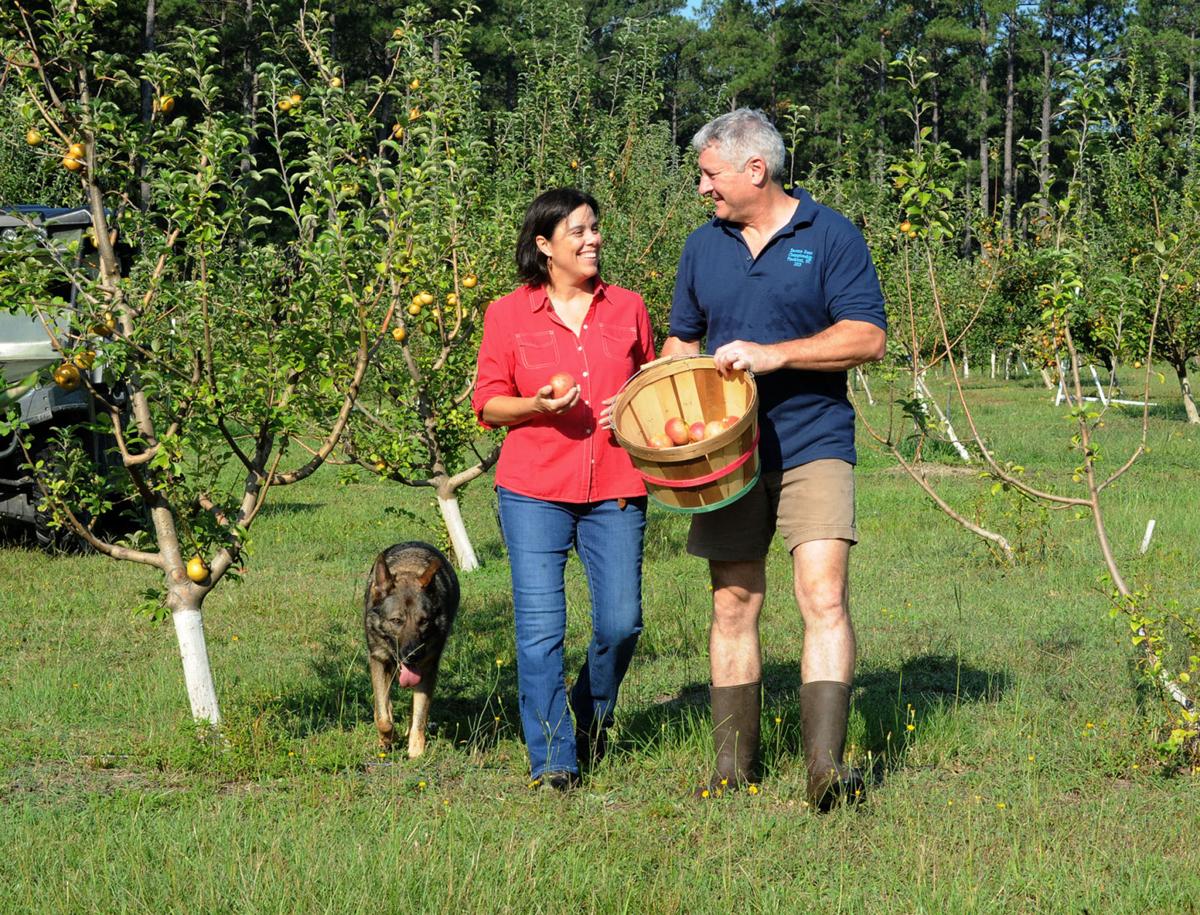 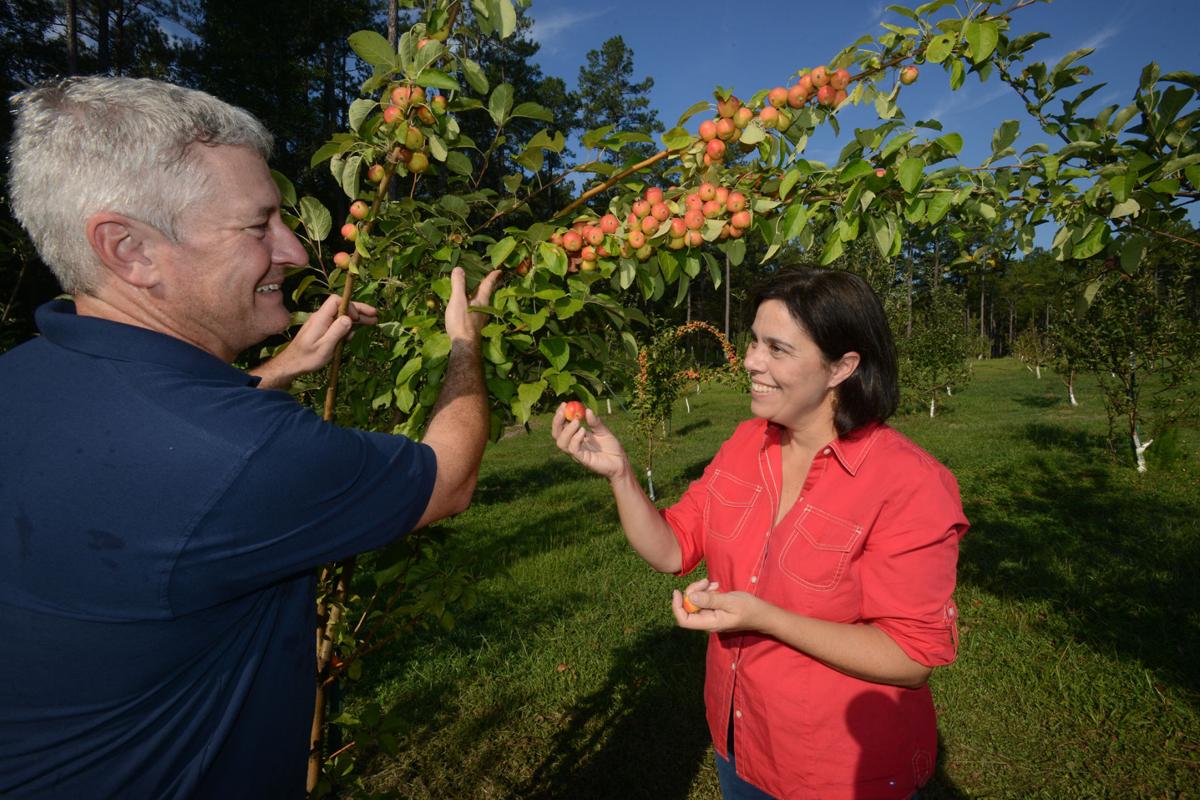 Ann Marie and David Thornton at their heirloom apple orchard in Vass. The couple started James Creek Cider House and doubled their production capacity before their first anniversary in business. 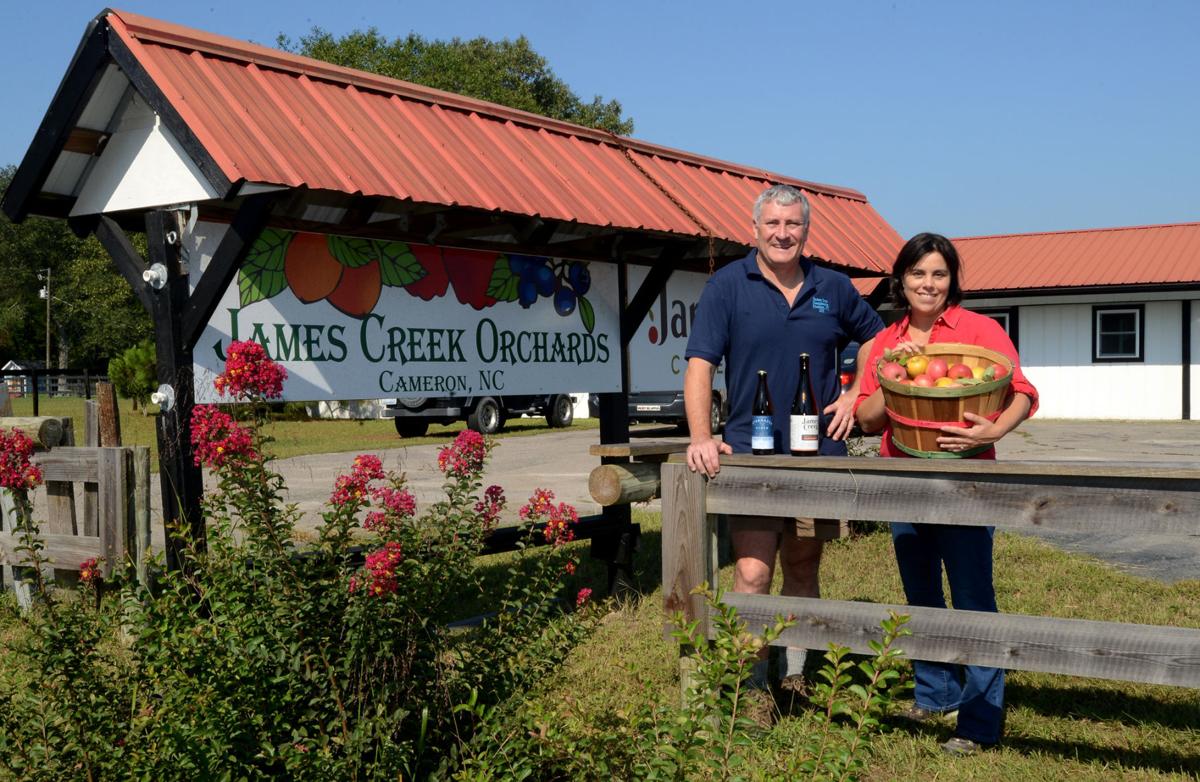 The James Creek Cider House in Cameron is where the real work of crafting heritage cider and the Thornton's more playful cider line -- Stargazer -- is done. The couple are transforming an old ice cream stand at the same location into a retail shop. 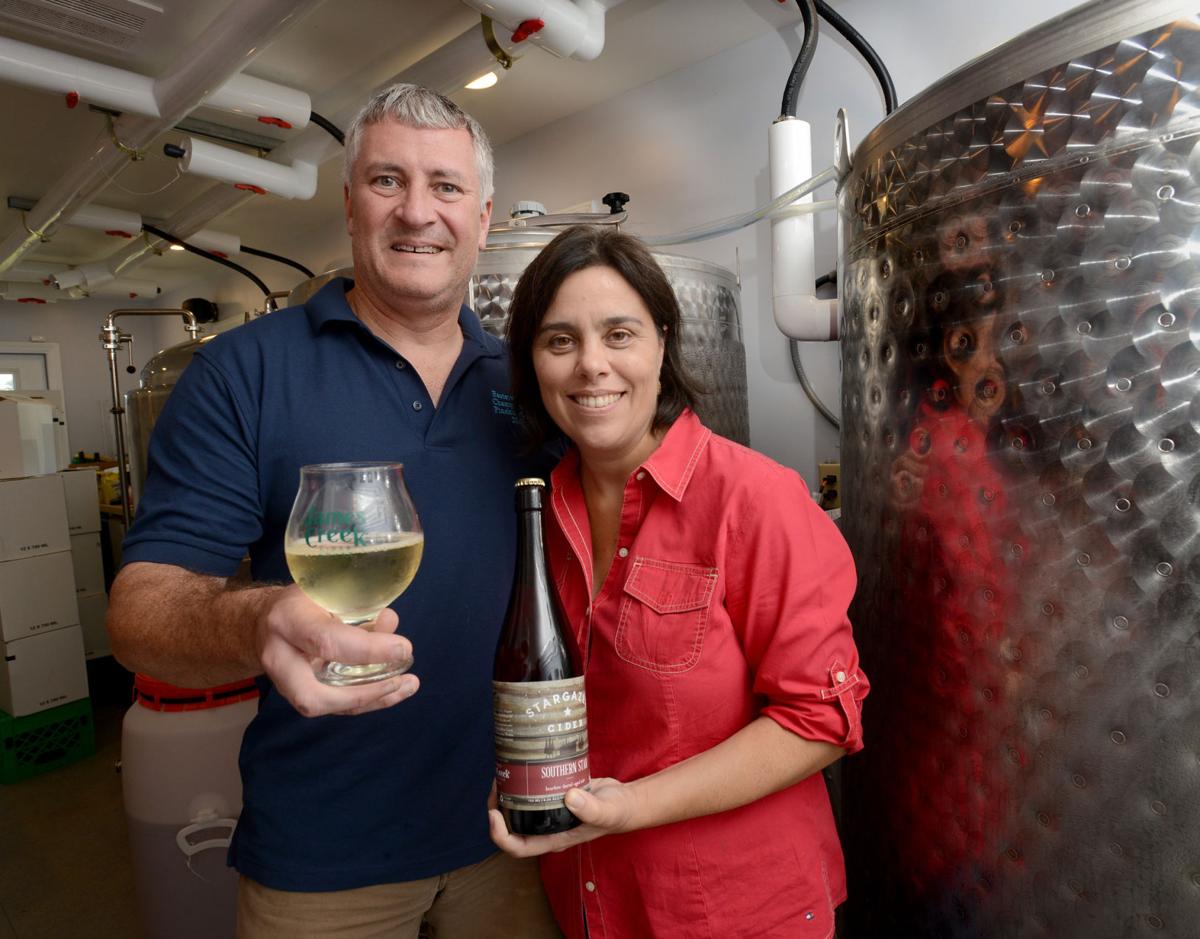 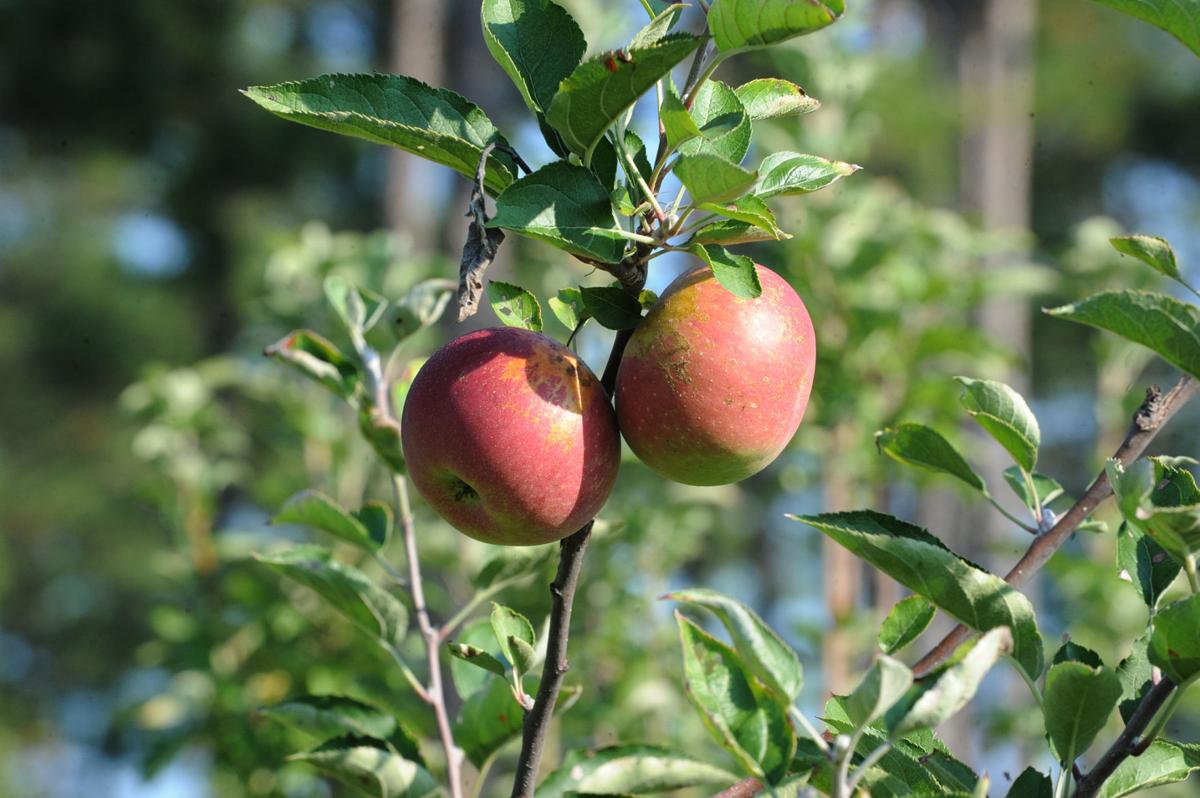 Ann Marie and David Thornton grow more than 75 varieties of apples at their orchards in Vass and Cameron.

Ann Marie and David Thornton at their heirloom apple orchard in Vass. The couple started James Creek Cider House and doubled their production capacity before their first anniversary in business.

The James Creek Cider House in Cameron is where the real work of crafting heritage cider and the Thornton's more playful cider line -- Stargazer -- is done. The couple are transforming an old ice cream stand at the same location into a retail shop.

Ann Marie and David Thornton grow more than 75 varieties of apples at their orchards in Vass and Cameron.

Once the nation’s most popular beverage, hard cider is gaining ground with consumers rediscovering the appeal of local foods and craft beverages.

Working with small batches of heirloom apples grown in Vass and fermented in Cameron, David and Ann Marie Thornton of James Creek Ciderhouse make a heritage-style cider worthy of a king’s ransom.

Tradition dates cider making to before 55 B.C. That is about the time the Romans arrived in England and discovered villagers drinking a fermented alcoholic beverage made from apples. Perennially popular across the pond, hard cider became the drink of choice when the first English settlers found only inedible crabapples in the new colonies. According to historians, they planted English apple seeds and soon began cultivating orchards.

James Creek Ciderhouse is their signature product — crafted in the heritage cider tradition — but the couple also answer the more modern palate with a sweeter approach in their Stargazer cider line, which incorporates fun, fruit-infused flavors.

“We are picky about which apples we use,” said David Thornton, a pulmonologist by trade, brought to the area courtesy of the U.S. Air Force.

A friend recommended that he look at Southern Pines when he and his wife relocated back in 2002. They settled on a farm property and began growing apples a couple of years later.

“We know which ones will make the best cider. Most commercial cideries are not also growers, and they don’t know apples as well,” David said. “So if we have an edge, that is it: We understand apples.”

For Every Apple, A Purpose

James Creek recently celebrated its first anniversary in business, and the Thorntons’ orchards have grown to 1,100 apples trees, 30 pear trees, around 800 peach trees, plus additional farmland set aside for growing muscadine grapes, blueberries and persimmons. Looking ahead, they have plans underway to develop their Cameron-based ciderhouse, located on old U.S. 1, into a tasting room and retail shop.

“We started with heritage cider, and that is where we’ve had good success. But we wanted to try something else too, so we started the Stargazer line,” said David. “We add our own apples and also purchase apples grown on other family farms in central North Carolina. The James Creek Ciderhouse cider is much more rustic, more refined and old-timey. But we can only make it in very small batches. With Stargazer, that gives us a chance to bring in revenue and also stay local.

“Stargazer cider is more like a craft brew. We play with it and it is our fun line where we add different flavor sources.”

Running at full capacity, the couple’s enterprise can only produce a few thousand liters — at most — each year of the James Creek Ciderhouse heritage brew. By adding the extra apples purchased within 125 miles of Cameron for the Stargazer line, the cidery can ramp up production to about 20,000 bottles annually.

“We also give local growers another outlet for their apples. One guy this year called us because he had hail damage to his crops. We told him we could use it,” Ann Marie Thornton said. “North Carolina is in the top 10 for apple production in the United States. If it is not a pretty apple, it will go into a bulk juice line — literally a tanker truck will pull up to the farm. We want to avoid that and support our local growers.”

And in farming their own land and buying supplemental crops, the couple said they are more understanding of weather challenges, pricing fluctuations, and are more forgiving when apples costs have to go up.

“This is a fun community to be part of. We have a thriving cider industry in this state … and that is kind of cool,” said David. “We have learned a lot from mentoring farms. Ken Chappell has helped us, and I still have notes from our first phone call four or five years ago. It was like taking a sip from a fire hydrant. Then Taylor Williams (Moore County’s Agricultural Extension agent) came out. He can tell me more about my orchard from looking at the grass on the ground than I can from looking at the trees. How lucky we are to have these resources around here!”

Cusco — a large, friendly German shepherd — races through the orchard, charging after Ann Marie on a four-wheeler. Since the couple do much of the fruit-picking themselves, the family pet is at ease among the long rows of trees.

Ann Marie and David met in college and spent a semester together in London. There they fell in love with each other and the hard cider they found at the British pubs. But busy careers took precedence, and the farm was a story written a paragraph at a time. They didn’t set out to become cider makers. It just happened that way.

“The cidery started taking on steam about nine years ago,” Ann Marie said. “Dave’s birthday is in October and 10 years ago, I gave him a fruit press for his birthday. It is an old-style gadget used to make wine.”

The couple had home-brewed beer for a few years but had never tried making wine.

“We planted a few apple trees and just wanted to do cider. We were making investments in land, and we were looking for a project for the farm. We had bought our house with 16 acres, and then, when another 30 acres became available, we were able to buy that too.”

Growing fresh fruit and flowers to sell at the Carrboro Farmers Market, Ann Marie laughed that her side porch and refrigerator were quickly overwhelmed with her farming efforts. When the couple decided to try their hand as a commercial cidery, they knew they had to find a bigger space.

“There was a Cameron farm that was already in production, and they had a cute little homemade ice cream stand. We were at the decision point: We had to create our own outbuildings at our farm or go somewhere else. We made an offer in 2008, but the farmer wasn’t ready to sell.”

Patience — a quality necessary for growing trees and in small batch craft brewing — paid off for the Thorntons in 2013, when the farmer accepted their deal.

“The timing was really good,” David said. “He was happy we were able to take over. He had put the last 25 years of his life into that farm and wanted to see the land kept as a farm.”

The additional orchards and fruit trees on old U.S. 1 were exactly what the couple needed to bring James Creek Ciderhouse to life.

“The cider line is interesting. Fresh produce sales are seasonal. So, like this year, we lost our peach crop, and that is a huge part of revenue. With cider, it gives us a processed product with shelf stability. That is a huge help with year-round revenue. If a farmer can make a value-added product, that can be a big help to their cash flow.

“So then the question is one of packaging and marketing. And making quality products at a reasonable price.”

The Fun of Fruit

In its first year of operation, James Creek has already gained a strong following, especially with a few award-winning chefs and restaurants in Moore County and the Triangle area.

“We are getting good feedback. They appreciate our product is at a competitive price point, and there are very few cider makers in North Carolina who are working with homegrown, heirloom apples,” David said. “The ones we planted nine years ago are really coming in now. They are fun to work with, and we have apples from varieties that have been lost for years.”

Each year’s harvest is a bit different, with weather impacting each fruit crop’s success or failure. It is then within that small batch process where the Thorntons get creative in pulling together the best flavors and apple varieties.

Saturday, October 7, from 9 a.m.-5 p.m., at the Cameron Antiques Fair. James Creek will sponsor a booth at the corner of McNeill and NC-24/27