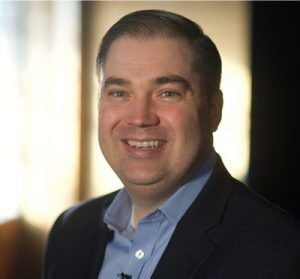 It’s more important that you are heading somewhere, because then you can steer the ship. –Brian George 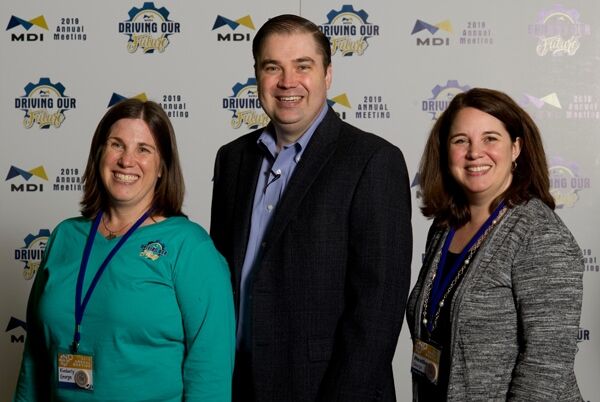 Not messing up a good thing is a challenge facing every fourth-generation family business leader. Brian George has been dancing on that tightrope since 2014 amid dramatic changes and increasing competition in the food industry, the bread and butter of his family’s Alex Lee Inc. since 1931.

His approach at the Hickory-based company is to balance the need to innovate while sustaining the organization’s culture and values. The strategy is to emphasize customer service, local ownership and close ties with food-industry partners while employing technology as effectively as much larger organizations. Those efforts are progressing well, he says, at both Winston-Salem-based Lowes Foods, the company’s 74-store retail chain, and MDI, its Hickory wholesale-food distributor that supplies more than 600 grocery stores globally. That success, he adds, is a credit to the company’s 13,700 employees, including about 2,000 added since the coronavirus started spreading.

Change is required in retailing, even for the powerful. George points to Walmart’s supercenter concept, which he calls one of history’s most brilliant business models. Now, with Amazon.com and other online competitors making it easy to buy thousands of products that fill those giant warehouses without visiting the store, the world’s biggest retailer is shifting to promote its own digital effort.

Likewise, change has been a hallmark at Alex Lee, which ranks No. 6 on Business North Carolina’s list of the state’s largest private companies. It was founded in 1931 when Brian George’s great-grandfather, Lebanese immigrant and Shelby resident Moses George, bought a small food company in Hickory for his two sons, Alex and Lee, to operate. The seller provided a loan to facilitate the sale, fully expecting the two men, then in their early 20s, to fail and eventually hand the company back at a discount.

Instead, the business flourished by supplying produce and other foods to local grocers, schools and mill stores in central and western North Carolina. An early decision was raising the pay of the company’s small sales staff with the expectation that happy salespeople would be more effective. It was a startling move in the middle of the Great Depression, but it proved motivational, Brian George says. The business adopted the name Merchants Distributors Inc. in 1956.

In 1966, MDI merged with another Hickory-based food distributor to create Institution Food House to service the growing restaurant and school-cafeteria industries, complementing the grocery business. Increasing consolidation of regional restaurant suppliers prompted the sale of IFH to Richmond, Va.-based Performance Food Group in 2012.

MDI bought its own retail group in 1984, the Lowes Foods chain then based in North Wilkesboro that had 75 stores in North Carolina and Virginia. In 1992, MDI changed its holding company structure and named Brian’s father, Boyd George, as chairman and president of the new Alex Lee, a name honoring the two brothers who oversaw the company’s rapid growth.

During its first 25 years owned by the Georges, Lowes Foods competed effectively with larger rivals Food Lion, Winn-Dixie Stores and Harris Teeter as a fairly traditional operator. In 1997, it acquired Byrd Food Stores, a 43-unit chain based in Burlington.

Over the last seven years, however, Lowes Foods has remade itself by creating more contemporary, innovative stores intended to appeal to discerning customers looking for specialty items while also offering competitive prices on basic items.

Under President Tim Lowe, who was hired in 2013 after working at Supervalu and Circuit City, Lowes Foods’ stores now include specialty sections such as Beer Dens full of zillions of varieties of suds; SausageWorks with fresh links, brisket and other meats; and old-time newspaper-themed Daily Delis. Two South Carolina stores have pioneered the speakeasy-themed liquor store Knock Knock Spirits concept, something that isn’t allowed in North Carolina, where the state controls liquor sales.

Brian George, 43, joined the company in 2006 after working as an accountant in Chicago. Graduating with a bachelor’s degree and MBA from Notre Dame University, his pre-CEO jobs included working as a grocery store manager and as vice president of sales at MDI. His sisters also have key roles: Kimberly is vice president of communications and corporate citizenship, while Heather is Lowes Foods’ senior vice president of brand strategy.

Changing Lowes Foods’ strategy followed customer conversations that concluded “that we have to stand out in the world and do something different and better than somebody else while creating value for the customer,” Brian George says.

While the chain has ranked between 45th and 50th in grocery magazine lists of the largest U.S. operators for many years, it is viewed as a bigger company because of its robust wholesale unit. Its private ownership status also allows long-term thinking, unlike public companies that face quarterly profit pressure.

Lowes Foods President Tim Lowe “has been able to see a strategy that was laid out and stay with it,” George notes. “Usually, it’s if you don’t see results in three years, we’re going to change. He’s been with us about six years and he told me, ‘My favorite part of this business is when I walked in the door, this is where we were going. And we’re still heading in that direction.’”

Sticking to a direction is no small order given the supermarket industry’s evolution, particularly in North Carolina, which is regularly cited as among the nation’s most competitive markets. While Food Lion, Harris Teeter and Walmart remain market-share leaders, the pie keeps getting divided. German-owned discount grocers Aldi and Lidl are expanding rapidly, while Amazon.com-owned Whole Foods, Lakeland, Fla.-based Publix Super Markets, Rochester, N.Y.-based Wegmans Food Markets and others are adding stores in more affluent neighborhoods, mostly in the bigger cities.

Lowes Foods’ goal is to stay on offense. “If you are looking at your competition, you’re probably already behind,” George says. “Nobody owns everything in this industry. They just own their piece. You just need to know where else you deserve to operate.”

Regional chains like Lowes Foods and the dozens of smaller independent operators served by MDI have a strong future despite constant consolidation in the supermarket industry, George says. “I firmly believe that this is one of the best times for the independent grocer. I don’t believe that society wants their choices to be just Walmart and Kroger (which owns Harris Teeter). People want to know who they do business with, and there’s nothing cooler than having a member of your community run a local grocery store.”

He sees that trend working across MDI’s footprint. “We’ve got independent customers that have unbelievable businesses because they connect with their communities.” He cites stores that offer breakfast bars that draw lots of local folks every morning or others with close ties to area farmers who don’t want to supply their produce to big chains. MDI’s role is to help those smaller businesses, which often operate one to 10 stores, improve their operations including staffing and marketing.

George likens his work to captaining a ship that requires momentum to steer. “It’s more important that you are heading somewhere, because then you can steer the ship. I’ve seen companies come in and change their direction dependent on what happened around them, what wave hit them, and they are rudderless, they have no momentum and no direction.”

Since its 2012 sale of IFH, two recent acquisitions have bolstered Alex Lee. In 2017, the company bought Atlanta-based Souto Foods, a wholesale supplier of Hispanic-oriented dairy and other products. Founder Sebastian Souto had built a strong business from scratch, building partnerships that would have taken MDI years to match as the Hispanic population soars.

“When we asked Sebastian why he was selling his business, he said, ‘I believe you guys can give more opportunities to my employees than I can,’” George says. “That’s the kind of servant leader that you want. He took an enormous risk to start a business and then to sell it to us. He’s still running it, and he’s doing an awesome job.”

Last year, Alex Lee bought a smaller version of itself: W. Lee Flowers, a closely held Scranton, S.C.-based company that had wholesale and retail units, including 50 grocery stores it operates under the Independent Grocers Alliance and KJ’s Market brands. The transaction strengthened MDI’s clout in neighboring South Carolina and its ties with other IGA operators.

While the COVID-19 pandemic has impacted every business, the food industry has undergone a stunning change in the last six months. No one wanted the crisis, but supermarkets have been a beneficiary, as the hospitality industry’s collapse prompts more dining at home. Demand for the Lowes Foods’ online ordering service quickly tripled, accelerating progress that the company had expected to take a couple of years.

MDI has also helped smaller grocers step up their technology games as it tackles its own digital transformation. In December, the company hired a new CEO, Michele Azar, whose past jobs included vice president of global e-commerce at tech retail giant Best Buy.

To be sure, Alex Lee felt an initial supply shock, prompting the need for more food to flow through its system and more workers. Overall, the company has added nearly 2,000 staff since March, mostly at its retail stores, and demand remains higher than pre-coronavirus days, George says. It partnered with food distributors Performance Food Group and Riviera Beach, Fla.-based Cheney Brothers to add warehouse capacity.

Fortunately, Boyd George had directed the company 15 years ago to prepare a pandemic-planning process after talking with an epidemiologist who studied food safety. While restaurants are slowly attracting more customers, Brian George expects the shift to more home cooking to endure after the crisis is mitigated.

“It’s lasted so long, and you are seeing habits change. Quite frankly, it’s cheaper and healthier,” he says. “Lots of studies have shown that family meals make for much healthier communities and families. … I hope it shows people that you don’t have to be busy 24/7, and it’s OK to sit down to take time to cook a meal.”

The return to home cooking has included a resurgence of traditional food products such as soup and cereal, reversing declining sales in recent years. That’s all good for George, who says he shares a simple palate with his four children. “My wife laughs at me when I come home and make cereal for dinner. But I could eat cereal four times a day.”

He also shares a family tradition of loving his work and the grocery industry. “My father and grandfather worked seven days a week. The concept of a weekend or a holiday doesn’t exist because the business doesn’t stop. I do family time and work.”

The George family owes its success, he adds, to its front-line staff, who met the definition of essential workers when the pandemic slammed the economy. “It was gratifying to hear people say, ‘I really appreciate your being here to stock the shelves or check me out.’

“People don’t realize [MDI] shuts down for six hours a year, maybe, and that’s a half day on Christmas. When they say, ‘I can’t believe you work on Thanksgiving,’ I say, ‘If you stop eating, we’ll stop working.’”