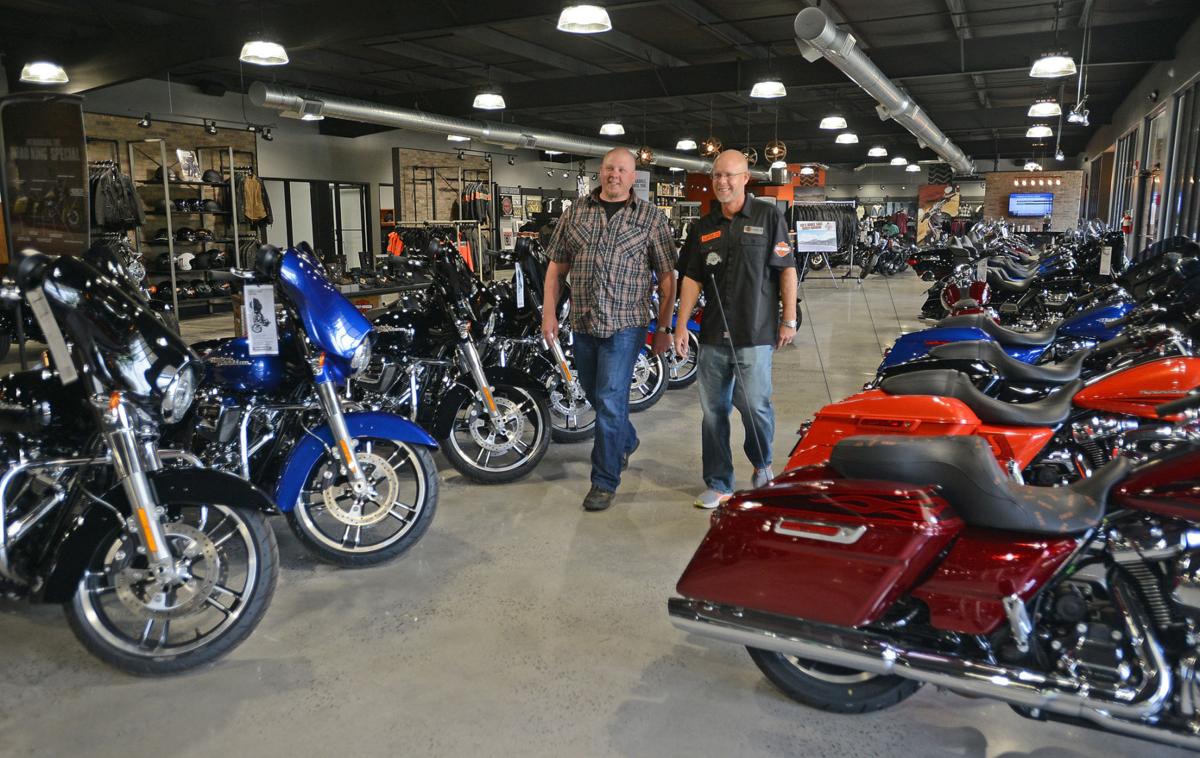 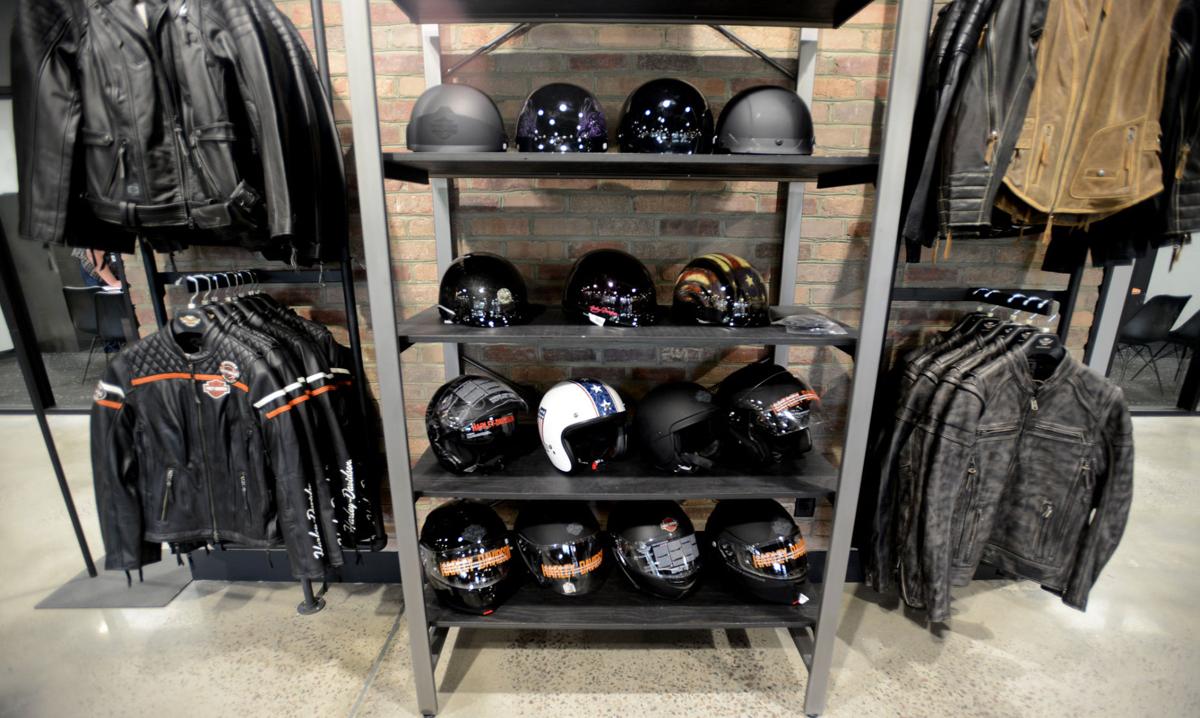 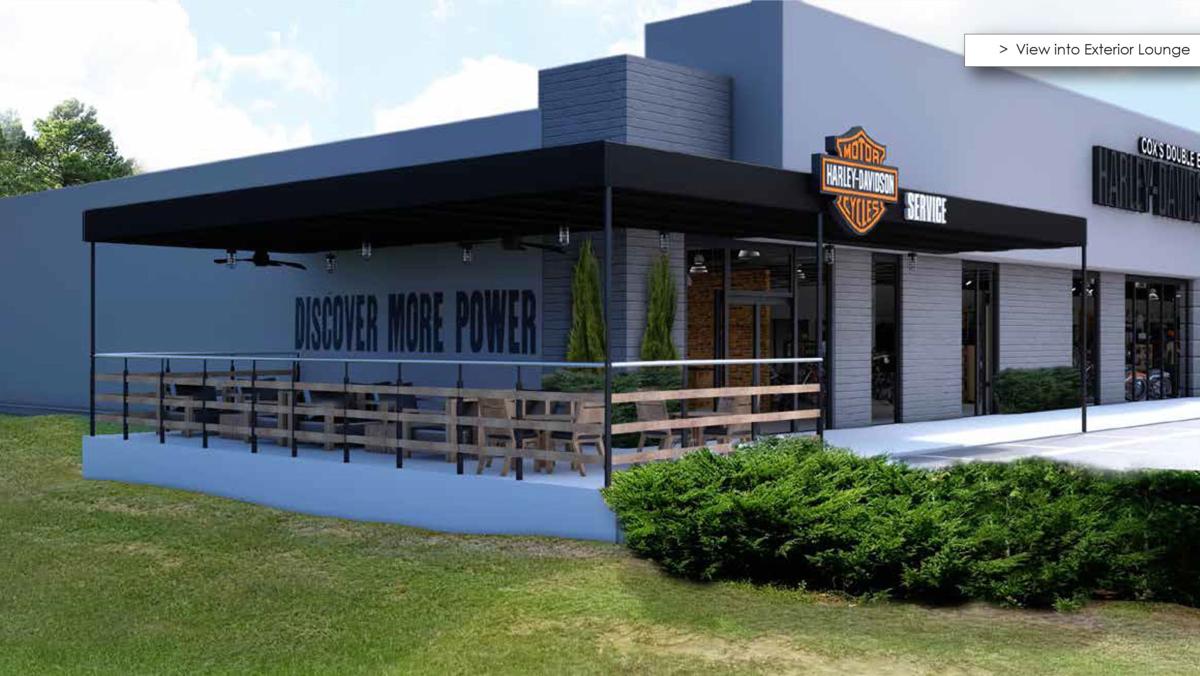 A rendering of the new patio addition planned at Cox's Double Eagle Harley-Davidson on U.S. 15-501, north of the Pinehurst Traffic Circle. A seating area will include a grill, fire pit, and small stage for live music events.

A rendering of the new patio addition planned at Cox's Double Eagle Harley-Davidson on U.S. 15-501, north of the Pinehurst Traffic Circle. A seating area will include a grill, fire pit, and small stage for live music events.

A true “destination dealer” for more than five decades in the Asheboro area, Cox’s Harley-Davidson has set up shop in the Sandhills for its potent mix of experience, service and sense of purpose.

Cox’s Double Eagle Harley-Davidson, a member of the Cox’s family of dealerships, opened in late March to rave reviews from local enthusiasts. Located about midway between Pinehurst and Carthage on U.S. 15-501, the dealership was purchased from Moore County native and former County Commissioner Jimmy Melton, who founded Sandhills Cycle Center in 1972 with Sherril Lee and Charles Auman, Jr.

New owner Robbie Cox said he’d had his eye on the location for at least 15 years.

“I like the mindset of the leadership here and where this community is headed with its growth,” Cox said.

“There is an extremely strong patronizing customer base for the Harley-Davidson brand in this region. As we say in the business, there are a high number of Harley’s in operation,” he said. “And we also have proximity to Fort Bragg, which is as Americana as you can get and the military is a piece of our customer base throughout the United States that is the strongest period.”

He’s poured a substantial investment of passion and money into his new venture and has a broad vision for its future but noted that Moore County, and its place within the Sandhills region, is a bit of an anomaly.

“When we did a market study and analysis, we are kind of in the middle of nowhere and also in the middle of everything,” he said. “When you climb on a motorcycle, you want to feel the wind in your hair. We think from points south of Asheboro and Raleigh, then from Fayetteville and down to Rockingham, we feel we can provide the correct experience and customer service and events to become a destination.”

“There is a heck of an opportunity here. We just have to make it happen,” Cox said.

Making Way for a New Generation

Work began last December, before the final deal was inked at closing. Major renovations at the former Sandhills Cycle Center started with tearing out the old tile flooring and dropped ceiling: It was a down to the studs and rafters affair.

Cox commissioned a Florida-based designer, Andres Herrara of Fresh Design, to come up with a new showroom concept and hired Uwharrie Builders out of Troy to handle the heavy lifting.

The gear shop is nearly complete with a 6-bay service garage that has room to expand up to 12 bays, depending on demand. Cox’s will offer full service capabilities including performance work. A handpicked team of mechanics bring more than 100 years of combined experienced to the garage.

“We’ve brought guys in from all over the country. We have an array of talent and have moved a few long term employees from our other Cox’s dealerships,” said Rob Clark, Double Eagle’s operations director. “We wanted to implant our culture by bringing in folks from our family of dealerships.”

The interior renovation encompasses a new retail and motorcycle sales area, service and parts department, and offices for finance and insurance department staff. Importantly, there are also plenty of places to simply come hang out. A coffee bar in the retail section adds flavor to the room, here and there are cozy seating areas for two or more to relax.

Outside the shop a more ambitious plan is underway. A full exterior facade renovation includes a new outdoor patio and parking area for 84 vehicles. The informal porch includes covered and uncovered seating areas, a grill will be installed so customers can ride up and whip up a hot meal, and a fire pit and small stage for live music will complete the picture. Food trucks are scheduled to visit and the casual, friendly vibe is open to everyone — not just motorcycle owners.

“We want to create the same customer service and same experience we are known for in our other businesses,” said Cox. “We have always worked closely with charities to host events and we want the shop to be a place that people come and enjoy.”

Family and the Harley-Davidson Culture

The Cox family established the first Cox’s Harley-Davidson in 1961, in Asheboro. They later opened a dealership in Rock Hill, SC, in 2004, and Cox’s Northern Tier Harley-Davidson in Mansfield, PA, in 2006. The family sold the Pennsylvania dealership two years ago to focus on the market here in the Carolinas.

“Our very first dealership started in a two-car garage beside my grandfather’s house,” Cox said.

Recil Cox was raised on a farm and made his way with a sixth grade education. He took on the job of maintaining the farm’s machinery, then headed for the city, working as a mechanic in a hosiery mill and later with a manufacturer. As a hobby, he also took up motorcycling and fixed his friend’s bikes in the evenings.

“Harley-Davidson approached him about being a dealer. He was an enthusiast and mechanic but not a businessman. They convinced him to build the two-car garage and that could be his dealership,” Cox said.

In 1961, he became a full-time dealer with a $50 franchise fee, put in business by Mr. Davidson himself — the son of one of the founding Davidson brothers.

“I am third generation and we have fourth generation on the ground,” Cox said, of his teenaged son and daughter. “If they continue their education and decide this is what they to do do, I know we can do this for another 56 years.”

For now at the new location, he’s stocked the showroom with 120 new and pre-owned motorcycles. Cox anticipated they will sell around 400 motorcycles the first year and hopes to progress up to 550 annually within the next three years. By tradition, each new motorcycle owner gets a standing ovation send-off with Double Eagle staff. A bell is rung and a photo of the triumphant moment is posted for all to see on social media.

“When you buy a Harley, it is not just a motorcycle. It is an entire lifestyle,” said Clark. “We have created an atmosphere here and the spaces to hang out because we are creating a place for the lifestyle. It is about being part of that family.”

“We really want people to come, see what we’ve done here, and be comfortable,” he added. “We want people to think of us when they need someplace to hang out. At Asheboro, we work so well with different restaurants and businesses. We host charity events and there is a lot going on. We would love to see that here.”

The outdoor porch will be ready for company in June and Cox is already scheduling events throughout the summer. A Grand Opening will be held in the fall, once the weather cools down a bit.

Also on deck are plans to start up a Harley-Davidson Riding Academy program. The three-day course includes classroom hours on safety, controls and functions of a motorcycle. The class also includes hands-on motorcycle riding instruction and a lot of history and culture associated with the Harley-Davidson brand and different families of motorcycle offered.

“Everyone is welcome here, whether your are a rider or not. We see everyone as family and we want to invite the community to come and hang out and have fun with us,” Clark said. “This is a fun product. If you say motorcycle in the United States, people automatically think of Harley-Davidson. The Riding Academy is meant to break down any barriers. You’ll get an understanding of the culture. Harley-Davidson is not that big, bad ‘1 percent’ biker. It is the doctor, it is a farmer, it is your neighbor.”