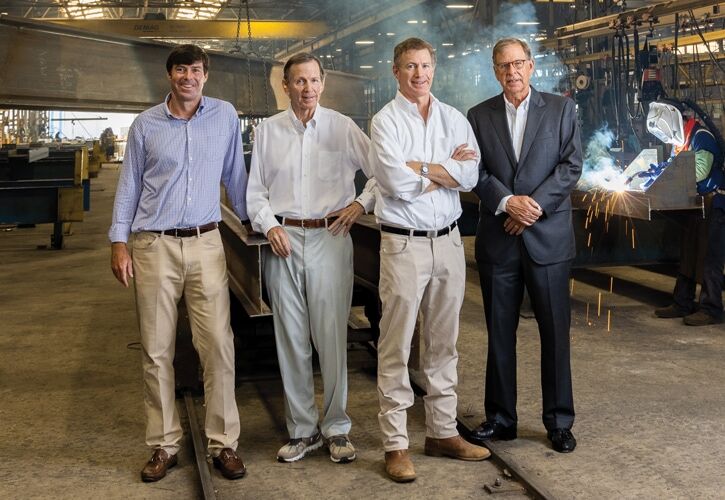 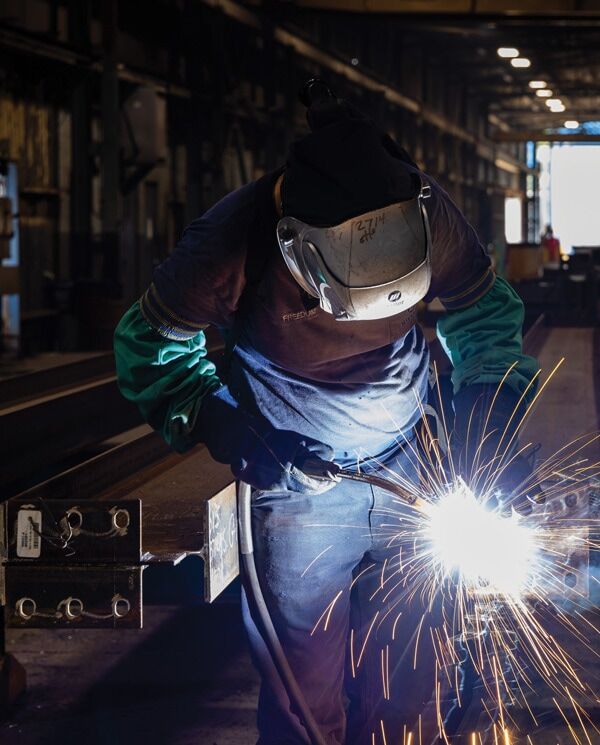 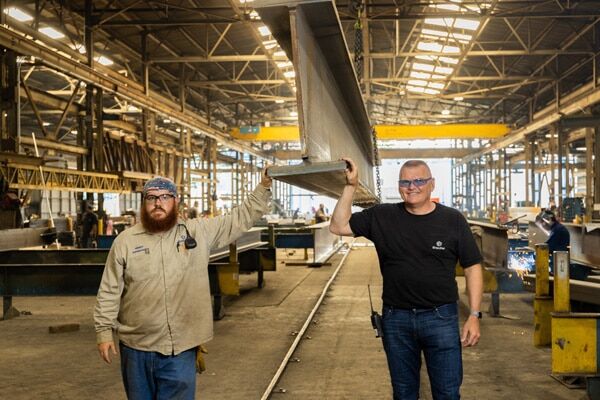 SteelFab, a low-profile family business based in a nondescript area of west Mecklenburg County, may have had more to do with building Charlotte than any other enterprise. Literally.

Sixty-five years after J. Glenn Sherrill, the Depression-era son of a sharecropper and mill worker who founded the company, SteelFab is one of the nation’s largest fabricators of structural steel and a favored construction partner for commercial developers, institutions and corporations. It ranks No. 18 among the state’s largest private companies, according to Business North Carolina’s Top 125 list.

Nearly two dozen of Charlotte’s most prominent downtown structures are built from tons of the company’s fabricated steel beams and framing. The NASCAR Hall of Fame, Ally Charlotte Center, Bank of America Stadium, Barings’ 300 South Tryon tower, 1 Bank of America Center and Hearst Tower are among the company’s signature projects.

Nationally, SteelFab’s portfolio includes projects as diverse as Washington, D.C.’s National Museum of African American History and Culture, Atlanta’s Georgia Aquarium and Daytona International Speedway’s expansion. Its largest financial payday was Philadelphia’s 60-story Comcast Technology Center, which is held up by 20,000 tons of steel. Southern Co.’s Plant Vogtle nuclear site in Georgia has the record for the most steel: 25,000 tons, or 50 million pounds.

Hardscrabble rural life during the 1930s led Sherrill to leave school after the eighth grade for mill work to help support his family. He was a mechanical wizard who, at age 12, took apart and reassembled car engines. Sherrill left his textiles job after a year to join the maintenance department at Southern Engineering in Charlotte, at the time the Southeast’s largest steel fabricator.

SteelFab’s biggest project dollar-wise involved 20,000 tons of steel at the 60-story Comcast Technology Center. It opened in Philadelphia in 2018.

He soon learned to build stairs and handrails and became a shop foreman, a job he held for six years. When World War II broke out, company employees were exempt from service as their work supported the war effort. But in 1942, a patriotic spirit prompted Sherrill to join the Navy.

Upon his return in 1946, Sherrill teamed with a pair of residential builders to form a steel-fabrication business in Salisbury. The business had a successful first year, so Sherrill wanted his shop workers to share in an annual bonus pool, a notion not held by his partners.

Upset at the inability to reward those workers, he quit and formed Steel Fabrication Service in Charlotte in 1955. Five years after he fashioned the first railings in his barn-turned-workshop, SteelFab was incorporated.

Integrity, industriousness and the “golden rule” approach to relationships with customers, vendors and employees formed SteelFab’s core values. “Our culture was started by my grandfather and certainly followed and continued on by my father (Ron, chairman emeritus) and uncles (Don, vice chairman, and Phillip),” says Glenn Sherrill, who became CEO in 2017.

“The philosophy is one that has helped us a great deal and is quite simple: Treat people how you want to be treated, with respect and integrity.”

All in the family

J. Glenn Sherrill’s three sons played significant roles in expanding the business. Ron, the eldest, started at the company in a summer job at age 15. He returned after earning an engineering degree at N.C. State University to work in operations and sales, eventually succeeding his dad as CEO in 1980. Ron’s younger brothers Don, also an N.C. State graduate, and Phillip, a Western Carolina University alum, spent their careers working for the family business.

The North Carolina Business Hall of Fame, a project of Junior Achievement and the N.C. Chamber, is including Ron and Don in its 2020 class later this year.

While the scope of its work has mushroomed over the years, SteelFab’s services have long fallen into three main buckets. First, it acquires steel from Nucor and other large manufacturers on behalf of construction clients. Then, SteelFab staffers work with various architects and engineers to design and fabricate steel beams and other products that become the “bones” of structures. This is the most “value added” part of the business, the piece where it can set itself apart. Finally, SteelFab works with subcontractors that install the steel to erect structures.

By the late ’80s, the business was selling more work than it could fabricate in its Charlotte operations, so it built a plant in Florence, S.C. The site was chosen partly because of its proximity to Nucor Steel’s Darlington, S.C., plant, which helped make skilled labor available in that area. The template for expansion was born by positioning operating divisions close to customers and seeding them with local managers who hold some equity. The strategy has fueled the company’s success.

“My grandfather believed strongly in profit sharing,” Glenn Sherrill says. “He felt local management should have an ownership share of the business they were running. With [Charlotte Miscellaneous Steel] and Florence, we created Subchapter S corporations. Management teams hired to run these business units received some equity.”

Through the decades that followed, SteelFab established seven regional S corporations in which the top managers typically hold 10% to 15% of the equity, with the balance controlled by SteelFab and the Sherrills. The company’s footprint extends from the Southeast to the West Coast. Last year, the company acquired a majority interest in L&M Fabrication in Tangent, Ore., providing capacity to serve West Coast clients such as Google, Microsoft and Facebook. The tech giants are building data centers to meet the insatiable demand for more bandwidth.

Though family-run businesses can be fraught with conflict, SteelFab has continued to grow because members have a culture of mutual respect and capitalize on each other’s talents. “We have solid working and personal relationships,” says Glenn Sherrill, who notes the greatest difficulty family members face is turning away from shop talk when outside work.

The senior nonfamily executive is Marsh Spencer, the president and chief operating officer. Ronnie Sherrill hired Spencer in 1997 as executive vice president after he had worked for Metromont, a Greenville, S.C.-based precast concrete company that is also family-owned. Spencer was promoted to his current posts in 2017. “He’s got a battery that never slows down,” Glenn Sherrill says. “Not only is he a great sales guy and a great relationship guy, but he understands all the complexities of steel construction.”

With various industry welding and safety certifications, scheduling, relationships with steel mills and other vendors, Glenn Sherrill says, “There is a lot to know in this business, and [Spencer is] an expert.”

While SteelFab’s fortunes have been tied to the strong economic growth in the Southeast over the last several decades, the company didn’t escape the economic downturn of 2008. “It began as our best year ever,” Glenn Sherrill says. “We had a wonderful backlog with some large government contracts. But between October and Christmas, 26 jobs in Charlotte alone [were] canceled.”

Executives took pay cuts, and the company was forced to reduce staff. Revenues dipped 60 percent over the next two years, yet the company came surging back. “We scrutinized all of our spending, even down to pencils, paper and truck tires. We found more waste than we realized. Ultimately, the downturn made us a stronger company.”

Today’s global pandemic presents different challenges, though it’s not been as bleak as Glenn Sherrill expected at the onset. The company imposed a hiring freeze but hasn’t reduced staff.

“I thought in mid-March, order entries would fall off a cliff,” Glenn Sherrill says. “Beams dropped $25 a ton, plate and [tube steel] dropped $40 a ton in April. They went back up in May, so material pricing basically remained flat.

Renowned for building infrastructures for some of the nation’s largest skyscrapers, SteelFab doesn’t try to impress with its own headquarters building. The unassuming two-story Carolina brick structure is in a lightly developed area on the west side of Charlotte Douglas International Airport, about 16 miles from J. Glenn Sherrill’s birthplace in Mount Holly. Staying out of the limelight is the family’s style.

“Charlotte has been a very good place for us to do business,” Glenn Sherrill says. Efforts to give back to the community, particularly as one of west Charlotte’s larger employers, have included a long partnership with West Blvd Ministries. The Christian-based nonprofit provides a variety of programs to assist residents in the mostly lower-income neighborhoods.

In 2014, the company started SteelFab University, an apprenticeship for area high school students interested in learning about manufacturing careers. “We start with high school freshmen working over the summer,” says Victoria Cross, SteelFab’s vice president of human resources and safety. “Each apprentice works with a mentor developing marketable skills, not just in steel fabrication, but life skills as well. After three years and successful program completion, students have the opportunity to take full-time positions.”

Steelfab’s success has attracted periodic private equity interest, but the company hasn’t seriously entertained prospects. Likewise, a public offering isn’t going to happen, according to Glenn Sherrill. “We’re very conservative in what we retain in earnings every year, and we have enough capital without public markets to do what we want to do.”

Transitioning SteelFab to a fourth generation of Sherrill-family ownership is already on the minds of Glenn and Stuart Sherrill. “Nothing would make me happier than for my two sons (ages 14 and 17) to come work for the family business,” Glenn Sherrill says. “Stuart feels the same way about his two children. (They are 10 and 17.) Yet, if they don’t want to go work in the business, we need to prepare for that too.”

Earlier this year, the family formed a governing board to offer guidance, oversight and strategy and chose Charlotte investment banker Erskine Bowles to join the effort. “It took me a long time to get comfortable with bringing on an outside director,” Glenn Sherrill says, “But we’re not going to be around forever, and a true governing board is needed to hold our seven company presidents accountable.”

Bowles, the former UNC System president and chief of staff to President Bill Clinton, has been a longtime family friend and mentor to the Sherrills. A former director of Facebook and other giant companies, he lends an experienced voice as SteelFab considers acquisitions, capital expenditures and market expansion.

“The most remarkable thing to me about SteelFab is the innate goodness of the people at the firm,” Bowles says. “I’ve never known people who are simply plain good to the bone like this family is. When I talked with customers, suppliers and vendors, all of them spoke of how the Sherrill family put them first in every single engagement. The chance to work with them is not only a joy but an honor.”