With an economic past rooted in agriculture, Lee County is sowing seeds in high-tech industries and modern amenities. 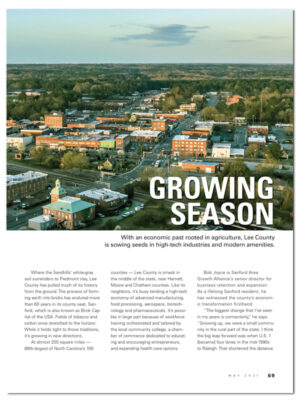 Where the Sandhills’ white-gray soil surrenders to Piedmont clay, Lee County has pulled much of its history from the ground. The process of forming earth into bricks has endured more than 60 years in its county seat, Sanford, which is also known as Brick Capital of the USA. Fields of tobacco and cotton once stretched to the horizon. While it holds tight to those traditions, it’s growing in new directions.

At almost 255 square miles — 89th-largest of North Carolina’s 100 counties — Lee County is smack in the middle of the state, near Harnett, Moore and Chatham counties. Like its neighbors, it’s busy tending a high-tech economy of advanced manufacturing, food processing, aerospace, biotechnology and pharmaceuticals. It’s possible in large part because of workforce training orchestrated and tailored by the local community college, a chamber of commerce dedicated to educating and encouraging entrepreneurs, and expanding health care options.

“The biggest change that I’ve seen in my years is connectivity,” he says. “Growing up, we were a small community in the rural part of the state. I think the big leap forward was when U.S. 1 [became] four lanes in the mid-1990s to Raleigh. That shortened the distance to [Research Triangle Park] and the state capital. We have marketed Sanford as ‘The Southern Base of the RTP,’ but we were maybe fudging, just a little.”

While it’s a 40-minute drive to RTP from Sanford, the two are much closer when it comes to finding creative solutions. Jimmy Randolph, the growth alliance’s CEO, points to Lee County’s long manufacturing history as an example. “We landed Caterpillar and Pfizer, and we may have out-punched our weight card,” he says. “We invested in infrastructure in a significant way and were able to offer water and sewer to large manufacturing in a way that other counties were unable to do. We landed [faucet and fixtures manufacturer] Moen and others when our counterparts were still committed to textiles and furniture. We still have the brick industry, but the story continues of our adapting to the new economy and new trends in manufacturing. It says a lot about our people and their work ethic.”

Joyce and others at the alliance group point to Central Carolina Enterprise Park as the perfect home for manufacturers. The almost 250-acre Certified Site offers easy access to U.S. 1. With utilities and a new $6 million road, it’s primed for the next relocating or expanding company. But the economic booster’s latest episode of adaptability comes from a different playbook.

India-based Bharat Forge didn’t choose Lee County for its $170 million aluminum forging and machining operation, which opened in March, because of a business park, shell building, site-ready infrastructure or mega plot of leveled land. Rather, landing the manufacturer of electric-vehicle components was the result of listening to specific needs and investing in human kindness.

“There’s a story here about a community that is nimble, flexible and able to adapt,” Randolph says. “It’s a real testament, how welcoming this community has been.”

Two years ago, Bharat Forge went looking for a U.S. site well connected to workforce development that was near a major urban center and airport. Economic Development Partnership of North Carolina’s Melissa Smith, who is the vice president of business recruitment and development, and Colin Kiser, international business development manager, took up the search. Joining them was Rahul Padmanabha, EDPNC’s first foreign direct investment representative based in India. Padmanabha and Kiser visited Bharat Forge headquarters, and company representatives visited Sanford.

“We had the industrial park ready to go,” he says. “[Baba] Kalyani was with the group, and you know when the co-owner is on the visit because everyone defers to him. We get to the conference room, and we have some boards, maps, the PowerPoint ready, but they were in hurry-up mode. Every community’s presentation says they’re the prettiest place in America, so they wanted to cut through that and wanted us to show them the map.”

Bharat Forge officials had requirements. They practice Vastu shastra, a belief in giving buildings an energy produced by positivity and balance. Lighting is key, with main doors facing north or northeast. Other rooms have directional and furnishing specifics to create energy ratios.

Joyce knew a place, across U.S. 1 from the enterprise park, that offered all the particulars. The untouched 100 acres was about to go on the market. So they took a drive.

“They got out of their big black Suburbans, and we toured the property in [off-road vehicles],” he says. “This was pre-COVID, so we had about 20 people. Having a strong local team was essential. When companies want permission to build a factory, they don’t mean in two or three years. We went from greenfield site to factory in 12 months.”

“The county acted as an intermediary and purchased the land from the family,” Randolph says. “Then the county and city stepped up and got it pad ready.”

Joyce says that included cutting an entrance road from the northeast, demolishing an empty house, and extending water and sewer lines.

“We secured a [$1.5 million] Golden LEAF [Foundation] grant, and I cannot tell you how great they were to work with,” he says. “We have one municipality, Sanford, whereas Wake County has 12 or 13 municipalities. We had to pull together.”

The city of Sanford received a $1.3 million Community Development Block Grant for infrastructure needs. And because Bharat Forge’s project is estimated to add about $787 million to the state’s economy over the next 12 years, a Job Development Investment Grant was approved that would reimburse the company for as much as $3.5 million over that time, based on meeting job creation and investment targets.

In the next five years, Bharat Forge is expected to create about 460 jobs in Lee County. Their average annual salary is about $47,000. It already has mentioned expanding its 200,000-square-foot complex.
“That’s a real testament to the community and how welcome we’ve been to them,” Randolph says.

Interest isn’t waning. Last winter, four public hearings were held on proposed industrial projects, identified only as life sciences-related and expected to bring a total of 1,475 jobs. And Audentes’ 135,000-square-foot gene-therapy manufacturing site has two future expansion phases and should be operational later this year or early 2022. “We’ve always managed to attract new industry and build on the traditions we have,” Randolph says. “The resurgence of the life-sciences side shows our resilience as a community.”

“They walked us through the whole program, showed us businesses that had been started,” she says. “And we invited their director to come to Sanford and do a presentation for our community leaders.” 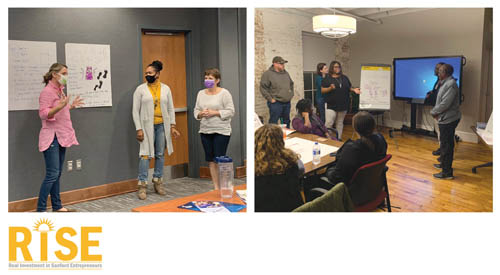 RISE concludes with students presenting their business plans and concepts to a team of professionals. Participants who plan to open a brick-and-mortar location in the downtown Sanford 17-block municipal service district area are considered for one $5,000 small business grant assistance package.

The result is Real Investment in Sanford Entrepreneurs — RISE — a series of eight-week courses. Each class can have many as 12 students and concludes with business presentations. A committee of local business owners selects one student to pursue opening a business in downtown Sanford and awards $5,000 toward rent and utilities.

The first RISE class spawned a yoga studio as well as two women’s boutiques and a screen-printing and embroidery shop. The second group produced a catering/family meals takeout restaurant that also uses its renovated downtown space for wedding events and baby showers. Another group purchased an old movie theater in Jonesboro, turning the space into a coffee shop, comic book store and artists venue.

“The classes are free, and we have three organizations that provide staff time,” she says. “Because it’s an educational setting, we can have more than 10 people [under COVID-19 regulations], so we’re meeting at the [Dennis A. Wicker] Civic Center in a huge room. … The Civic Center is letting us do it for free.”

“Honestly, one thing that can come out of this is people can say, ‘Oh, maybe I wasn’t meant to be in business,’ and they save thousands by not opening. That can be a positive for them, a different kind of success story. The RISE program has made such a big impact on our students and created really good relationships in our partnering with the community college and Small Business Center. I’ve been the chamber director for five years, and I think, honestly, this has been the most rewarding project I’ve worked on.”

Lee County’s population was 61,141 in 2019, according to the N.C. Office of State Budget and Management. That’s a gain of more than 33% from 1995, when Central Carolina Hospital opened in Sanford. Part of Duke LifePoint Healthcare, its Chest Pain Center was recognized with an accreditation from the American College of Cardiology in December. That month, the hospital also opened its Central Carolina Urology, returning this specialized care to the county.

Pinehurst-based FirstHealth of the Carolinas, also founded in 1995, has four hospitals in North Carolina. In 2018, it expanded into Lee County, where its campus provides a multispecialty medical office and the region’s only medically based fitness center. Through a partnership with Pinehurst Surgical Clinic, FirstHealth is expanding local access to orthopaedics, urology, vascular and vein, obstetrics and gynecology, and ear, nose and throat care.

“For more than 75 years, Pinehurst Surgical Clinic has provided high-quality care to the residents of our area,” says clinic President David Grantham. “We are excited to partner with FirstHealth and Lee County to increase health care access to those residents.”

Vascular and vein care and orthopaedics are available at FirstHealth’s Sanford location, which also offers primary care, cardiac rehabilitation and other services. The remaining expansions will be added in the next few months.

“As a Lee County native, I’m especially excited to see these expanded services in my hometown,” says FirstHealth CEO Mickey Foster. “I’m also thrilled that we can continue to grow our relationship with Pinehurst Surgical Clinic. Our organizations are both committed to providing exceptional care, and we look forward to seeing new options come to Lee County.”

“We’re like a town of shopkeepers,” he says. “We rolled up our sleeves and learned to make stuff. We have 100 years of making stuff. The community college took us to the next level and trained people in fields like computer-assisted manufacturing. Then we got about two dozen machine shops; then robotics came in. Look at us 100 years ago and look at us today. Bharat Forge, for instance, came at the right time. We’re all connected to the global economy, and you never know when the global economy is going to make a change.”