Seems certain, Recil and Poochie would be pleased as Asheboro-based Cox’s Harley-Davidson begins its seventh decade as one of the state’s largest sellers of the motorcycles that have virtually defined two-wheel travel.

Hosiery-machine mechanic Recil Cox would be beaming because the enterprise he founded in 1961 likely will sell $20 million-plus in bikes and accessories this year at stores in Asheboro and Rock Hill, S.C., across the state line from Charlotte.

Likewise, Recil’s son Poochie — his real but rarely used name was Gary — would be proud of his own son Stephen’s stewardship of the 50-employee dealership. The business thrives on traits from when Tar Heels worked in mills, mechanics worked under backyard shade trees, and marketing worked without focus groups.

“Grandpa did a wonderful job with outreach,” Stephen Cox says. “He was always really conservative. When someone hears motorcycle club now, they think of motorcycle gang, but the majority of his motorcycle club attended church with him.”

Despite deep roots in the state’s geographic heart, Cox’s Harley-Davidson is a modern business case study. Its two dealerships reflect 60 years that parallel North Carolina resilience and transition from textiles to high tech.

While Recil Cox worked at Asheboro’s family-owned Bossong Hosiery Mills, he earned a reputation for keeping Harleys running. “He’d grown up on a farm in Randolph County, and as the oldest child, he was kind of the default mechanic for farm equipment,” Stephen says.

He initially turned down an offer from a Harley factory representative asking him to open a shop. A year later, he relented, building a two-bay garage next to his house. “He had to pay a $60 deposit in 1960 to become an official Harley-Davidson dealer,” Stephen says. The first Harley dealership opened in Ohio in 1912.

Recil continued working his 7 a.m. to 3 p.m. hosiery mill shift, opening his motorcycle shop in afternoons and on weekends, until his dealership was solidly grounded. “He was extremely conservative [and] of strong faith,” Stephen says. “He was far from the stereotypical biker. He bound that small community of motorcycle riders in this area together through rides, cookouts and various celebrations.”

Cox’s Harley-Davidson rolled through the 1970s and 1980s, weathering the manufacturer’s miscues and increasing competition. Struggling to compete with foreign-made bikes, Milwaukee-based Harley was acquired in 1969 by bowling and athletics equipment manufacturer AMF, which slashed costs amid pressure from Honda and Yamaha models. The one-time standard of American manufacturing was mirroring Tar Heel furniture and textiles industries in losing share to foreign competition.

In 1981, investors, who included some members of the founding Davidson family, bought Harley for $80 million. Fortunately for the company, then-President Ronald Reagan provided a lifeline by slapping a 45% tariff on imported heavyweight motorcycles.

“The hardest time was in the 1970s when AMF owned Harley-Davidson,” Stephen says. “It suffered from the quality issues. But President Reagan, whether on purpose or not, wound up marketing Harley-Davison as the American-made dream.”

Under its new owners, Harley had a strong rebound and became a public company in 1986. As of mid-April, the company had a market value of $6 billion and annual sales of more than $4 billion, and it operated nearly 1,400 dealerships, including 630 in the U.S. Recil Cox ceded control of Cox’s Harley-Davidson to Poochie in 1995. “He was a huge personality,” Stephen says of his father. “Even his mom and dad referred to him as Poochie, and he became known throughout the corporate Harley-Davidson dealership network.” In 2004, he acquired the Rock Hill store.

Like his father, Stephen was born into bikes. “When I was a young boy, I was taking inventory, folding shirts, washing motorcycles, doing whatever needed doing.” He graduated from Elon University with a business degree in 2002. “I can’t say I came on board at any certain date,” says Stephen, whose mother, Jan Cox, is still the Cox’s Harley-Davidson corporate principal. “I was just always here.”

Recil died in 2017 at 91, outliving Poochie, who succumbed to colon cancer seven years earlier at age 56. Cox’s Harley-Davidson carries on their traditions, such as an event where as many as 1,000 bikers carry toys from Asheboro to the Baptist Children’s Home in Thomasville and Motorcycles for Mammograms, which funds breast-cancer screening for Randolph County women without health insurance.

Cox has no plans to expand. “We’re in a comfortable spot right now,” he says. “The Rock Hill store is on Galleria Boulevard, and the Carolina Panthers practice facility and headquarters are going in just one exit up from us. The whole area is growing like it’s on steroids.”

Selling a motorcycle with a bad-boy persona, Cox’s Harley-Davidson now faces an unlikely rival: “Our biggest competition is other family activities,” Stephen says, so the dealerships added patios, picnic tables and umbrellas, food trucks and other features. This year, the Asheboro location may sell 400 or more bikes, and Rock Hill, possibly 500. Motorcycle sales have been spurred by pandemic-induced outdoor interest that has seen Tar Heel parks, fishing sites and campgrounds swamped.

Cox’s personal bike is a $29,000 Ultra Limited, less than top-of-the-line models that approach $50,000. He’s on it less than he’d like, bowing to business and family pressure. He has two children, and his wife owns a Greensboro interior-design firm, Kara Cox Interiors. When he does ride, however, the Recil gene resurfaces.

“A lot of people say, ‘Hey, I haven’t done this in a long time,’ and this is what I enjoy. They reconnect with something they love, and we’re lucky to be part of that.” 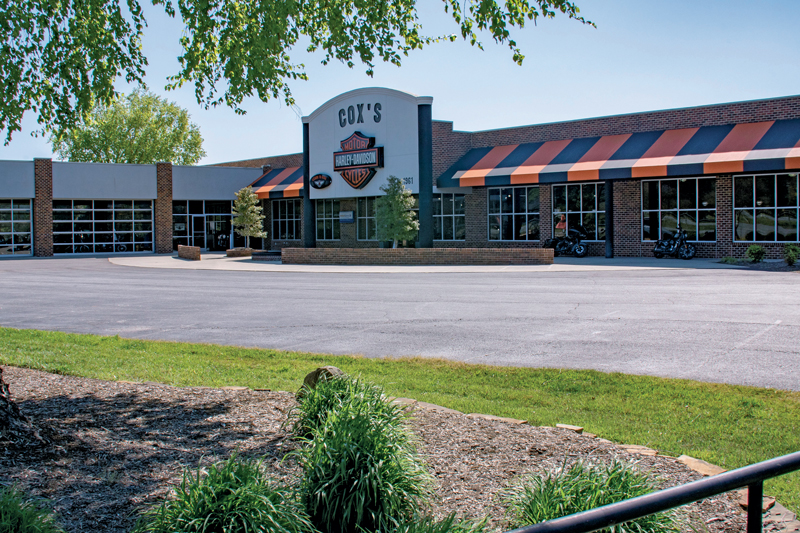 Cox dealerships in Asheboro and Rock Hill, S.C., expect to sell more than 900 motorcyles this year.